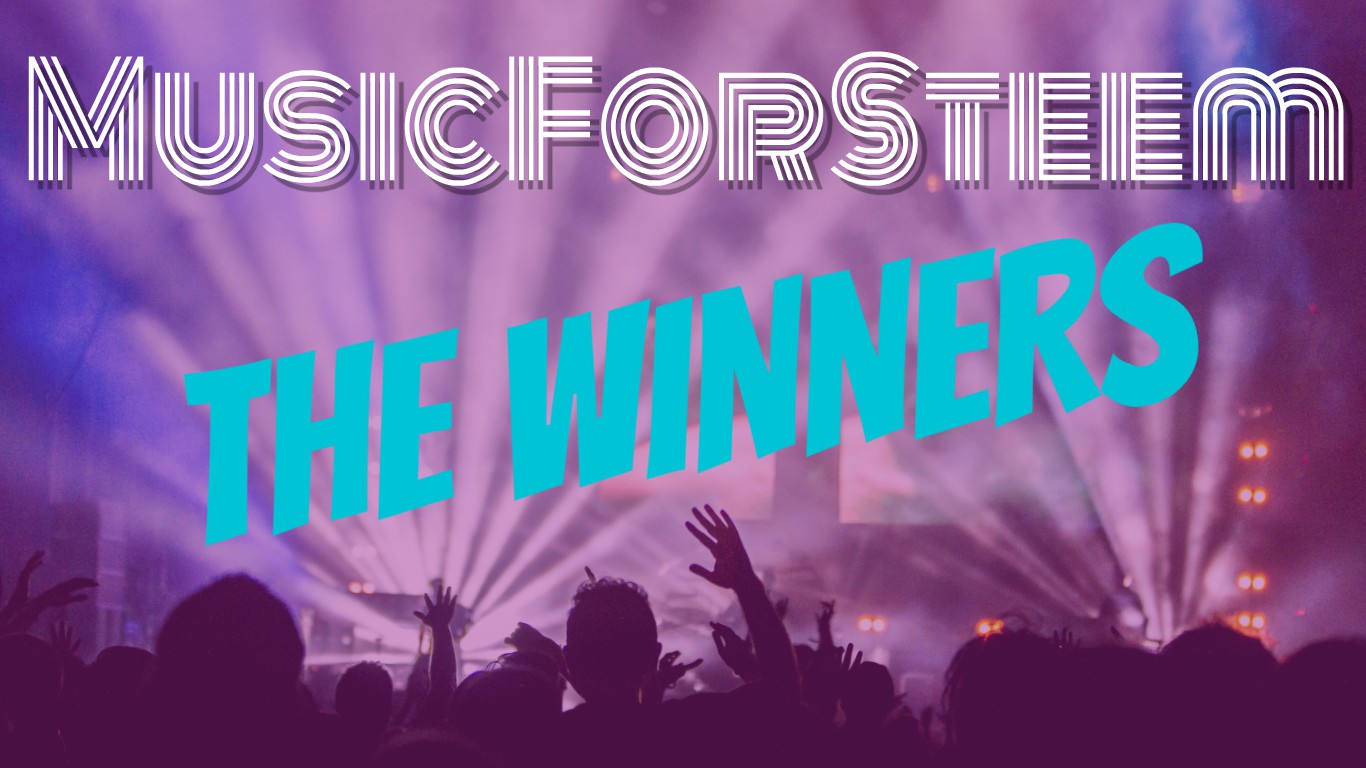 The votes are in, the community has decided. The first week of MusicForSteem was one to never forget and we hope you all liked it as much as we did. I can go on for a couple of minutes to build the tension, but we both know that you already scrolled down to see the

FIRST WINNERS OF MUSIC FOR STEEM!

The 4th spot was an ex aequo between @cmp2020 & @esouthern3 AND @leomolina! The community votes made the final decision. YOUR VOTE COUNTS

To celebrate the FULL Venezuelan podium, my respect:

WE THANK YOU ALL FOR YOUR PARTICIPATION

As you have noticed, the competition is fierce and was super impressed by ALL the performances. But it is a contest, so code is law! We hope you are happy with the chosen winners!

Tomorrow, we will post an update with the received votes from the members of the jury, and how the votes of the community were counted. And an extra rule we implemented to make this ALSO so fair as possible. (non-active accounts didn't count for example). Also, we like to have your input to make this contest even BETTER! All suggestions are welcome.

We have now 7 jury members from nearly all over the world. But like to get 3 more to make it even more fair! If you are from: New-Zealand, Australia, Asia, or North America, please join the @steemingcurators on discord and chat with @ciska to apply for Jury Member of Music For Steem!

A proud collaboration between @steemingcurators and @vdc


by @seo-boss and free to use by the community
steemexclusivevdcsteemingcuratorsmusiccontest

congratulations to the winners! i look forward to thw next contest

Thanks for participating and I cant wait to see your next performance! You will grow your skills every single week! The contest will also diversify in different leagues in the near future! Stay Tuned

thank you, and i also await to the winner of the NEW WRITING CHALLENGE on CHARITY

Thanks and happy you like it Kiwi! Btw, I need a judge from that side of the planet actually. If you or any other Kiwi wants to be one, you know how to find me :)

yep i can do that - will contact you later on discord

Congratulations to the Hispanic community demonstrating as always that it is talented and one of the most numerous on the platform. Thank you for believing in this project and there are the results. Thanks to the accounts @steemingcurators and @ciska for their valuable contribution in getting the music back on steem. Let everyone know that the Venezuelans won the first Music for Steem contest. CONGRATULATIONS...let's celebrate the party started with week 2

You are with many indeed! Hopefully, more people will jump the bandwagon this week! It was amazing and the kind words from everyone were super super motivating! Muchisimas gracias :)
VAMOS!

Congratulations to all my brothers Venezuelans who are on the Podium, VIVA VENEZUELA @juliolunar You deserve it dear ... @ danieldedosd2 Very good ... SUCCESS AND BLESSINGS.

TRANFER TO THE WINNERS OF MUSIC FOR STEEM WEEK 1

We also upvoted the winners with @steemcurator02 If we already voted their last post, we picked a random post or comment. Thanks @drugwars for the donation.

Congratulations to all the participants and everyone feel like a winner. Without a doubt an excellent contest and a wonderful job on the part of the organizers. Go ahead with the good work. STEEM ON

Thank you for your kind words! It is AMAZING to read all the responses! STEEM ON! Much love

I found the choice of the winner's box very fair.

I warmly congratulate the podium members and especially want to send a message of full support to @steemingcurators, @vdc and @ciska.

I am sure that next week we will have many more participants: So we must be watchful!

Congratulations all of winners...

Waiting for the next episode....
Have a good day...

You too and thanks!

We think the same, thanks!

Wow! Congrats to all the winners and contestants! Let's see more of you in the second week. I wish I can sing well now, haha 😅

congratulations! You all deserve these prizes. Wonderful

Here is my entry to the contest in its second edition. If you use Dtube to upload your video remember to also upload a link from YOUtube to be able to see them more easily.

That is wonderful project and my Congratulation both to participants and winners! Great job and please keep this project running!!!

Congrats to all winners! Excited to see the new entries for the 2nd round. Cheers guys!

Here is my entry to the contest in its second edition. I Hope You Enjoy It ^^

This is one of the many things i have experience om steemit and its great. Congratulations to the winners. Thanks steemit

My first entry for the musicforsteem contest week-2