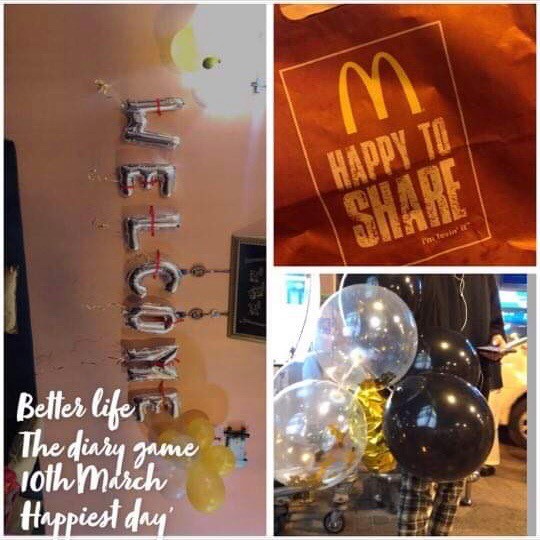 It was a happy day since I was finally meeting my cousins, aunty and uncle after complete 16 years!! I had a lot of stuff to do , I did house chores, cleaning etc. The day passed by and I was just waiting for the night time because we had to go to airport to receive them. We actually decorated the room to welcome them :p Bought cake from Kababjee's, it was a chocolate malt cake, I didn't take a picture of the cake since I was so busy with the things. We went to the airport, we brought balloons with us to the airport, we were really happy so we were trying to make the most of it. Their flight had some time to land so we got hungry and decided to eat something from Mc donald's. We ordered one share-box meal and it was enough for us. The total bill amounted to rupees 1750 including tax.

After done with eating, they had already landed, we met them, the feeling was so overwhelming and I didn't know how to handle the feeling! I was seeing them after a long time, after a decade.
It was around 1 am when we got home, we cut cake with them, talked for a long time, reminiscing memories together, we sat together for hours, the time went by so fast, it was almost morning and I had my morning class at 8:30 am :p I was tired but it was worth it.
My aunty started unpacking stuff she bought for us. She had bought so many stuff including bags, power bank for the phone, mists, make up, wrist watch etc.

SCENTED CANDLES WERE MY FAVOURITE!!

And this, my favorite cup :p

I REALLY LOVED THESE, LEGIT COMFORTABLE!

So where were they so long?

Please give it a read Mam and try to support us :)

Wow you got so many gifts from your aunt and the maybelline mascara is one of my favourite mascaras..
enjoy 😊