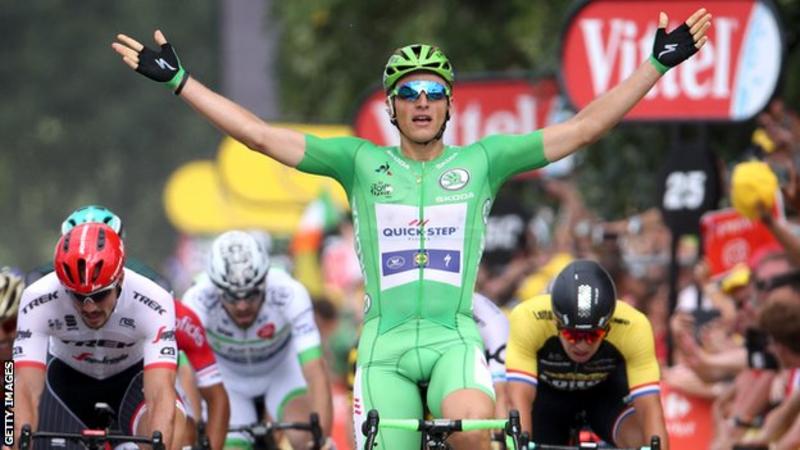 A shame and sad, he was one of these fast guys competing for the "Green shirt" since ages during Tour de France - he was not one of these hill hunters but he was a sprinter! Marcel Kittel retires from cycling because he lost all motivation to keep torturing himself on a bike. Marcel achieved 19 grand tour stage wins. His family is happy, Germany's bike community is in tears!

Germany's tour record hunter Marcel Kittel has had enough of the ordeals and ends his brilliant cycling career after 89 professional victories. The 31-year-old drew a line after months of guesswork in the current issue of the magazine "Spiegel". "Pain defines the sport, the world in which you live. I've lost all motivation to keep torturing myself on the bike," Kittel said.

The Thuringian had become a professional in 2011 and celebrated the second most successes of the season in his debut year with 17 wins after the Belgian Philippe Gilbert. With 14 day victories in the Tour de France, the ultra-fast sprinter is Germany's record stage winner in the Tour of France, where he also wore the yellow jersey for one day each in 2013 and 2014.

Kittel cancelled his contract with Team Katusha-Alpecin in May for personal reasons and has since left his future open. The Dutch racing team Jumbo-Visma, the team of their friendly colleague Tony Martin, was the latest employer to be talked about. But now Kittel made a clear decision.

A good reason was that his girlfriend is expecting a baby, the first child in November which is for sure a very good reason to stop and stay at home! In the last few months, he had become aware of what his sport had pushed into the background in his life. Already in July, Kittel had swapped his racing suit and bicycle coat for a fine short-sleeved shirt and a microphone. Visibly solved, he made his debut as an ARD expert (German TV station) at the 106th Tour de France. Compared to May, when the batteries seemed empty when the team separated, Kittel looked full of joy and charged with positive energy again in summer. At that time there was still talk of a personal time-out. However, Kittel made a secret of the continuation of his successful career and simply enjoyed his visit to the tour to the full.

In the past few years, however, Kittel has been a sporting wonder bag. In top form he was almost unbeatable, in worse times he seemed completely out of shape. In 2013, 2014 and 2017 he won at least four tour stages each, but in 2015 and 2018 he also won two real epidemic years. For the first time, Kittel now gave reasons for the separation from Katusha-Alpecin, where he had been under contract since 2018: He had not felt any trust in the team, "but only pressure. Pressure. Pressure.

In winter, Kittel wants to start studying economics at the University of Constance. We are wishing him good luck, even from the Steem / Sportstalk platform!