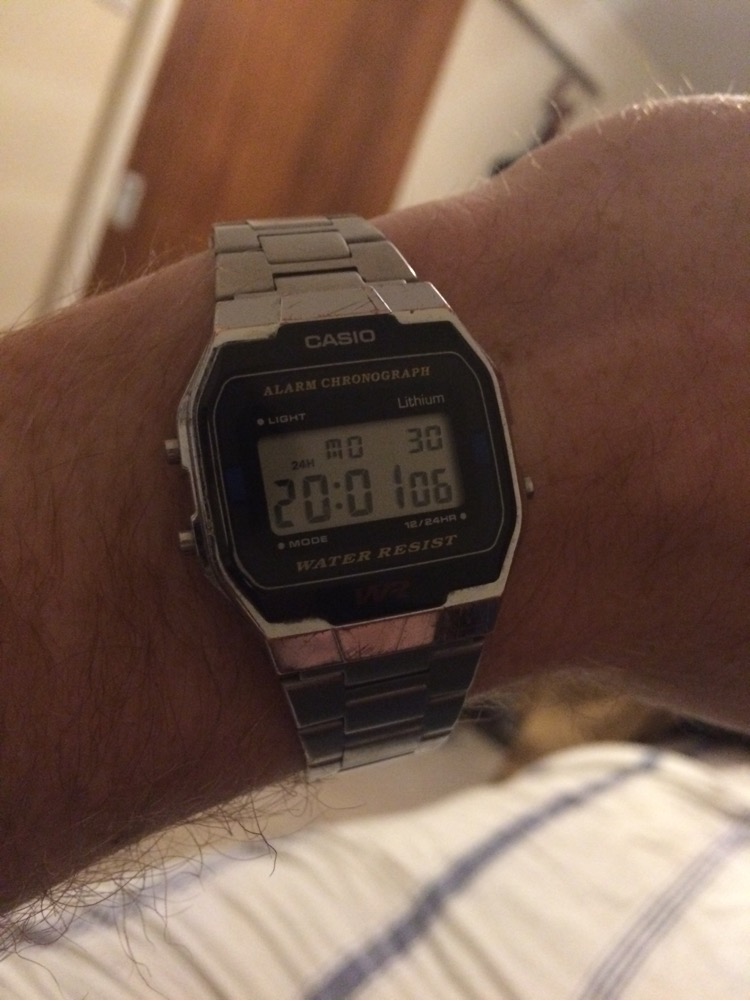 Pocket Watches were first worn on the wrist during the First World War, where soldiers found it simpler to wear their field watches attached to their wrists by cord. Given that this simplicity was to better coordinate ‘going over the top’ of the trenches the birth of the wrist watch is quite a sobering one. But no matter where it was conceived a good idea will always remain just that and the wristwatch was here to stay. Watches today have altered to be almost unrecognisable from where they started. Whatever your profession, there is probably a watch specifically aimed at your field, they can cost into the thousands and are a status symbol necessary for many to get ahead, hell even my 11 year old Neice has an Apple Watch. But I digress this little rant from me is not a history of modern wristwatches nor an analysis of the most popular models. No today I am writing to champion the cause of several simple Casio wristwatches all available for under £30.

So first of all I own and wear daily a Casio A163W. I did not buy this watch, nor was it a gift in the normal sense of the word. One Saturday night last year I was clearing down the dining section at the bar I work at and on a very messy table was what is now my watch, sitting at the bottom of a pint of water working perfectly (making it the perfect watch for working as a barman). From what I have managed to gather these watches are only advertised as splash proof and after being fully submerged like it was my watch should no longer work, so it’s previous owner understandably just left it as trash. It is made of stainless steel, is water resistant (according to the writing on the back and how I found it), tells me the date, month and year, has an alarm and chronograph function. It is quiet a small watch and the weight on my wrist is hardly noticeable. It’s design is very 1980’s and could be considered dated by some. As you can see from my photograph above it has taken a bit of battering but still does its job.

Now I understand that certain professions may need specific additions to their wrist wear. Most famously maybe the G-shock watches also by Casio and championed by current and ex military personnel the world over. I can also empathise with need for man working in the city to need a subtle indicator of his success without being over the top and for many people today a Rolex or smother high end watch brand that plebs like me don’t know about is what is necessary for them to get ahead. As a counter to the culture of ‘one up man ship’ seen in life today I feel that the example of Chuck Feeney the Co-Founder of DFS a man who has earned over 7 billion dollars in his life and still wears a Casio F-91W. As a man Feeney has always disliked flashy or over the top clothing and his watch of choice is no different. Also on a more serious note during the 1970’s and 1980’s the kidnapping of millionaires children was rife in Europe, Feeney made a choice to wear a low key but reliable watch as a small but possibly vital choice in keeping his own children safe over this period. In fact his logic here applies to all of us, a Casio will never be a thieves first choice nor would it mark you out as a wealthy target and in the worst case scenario replacing a lost or stolen Casio is not going to break the bank.

Now definitely not a major selling point for the average wearer but definitely an interesting little story to roll out at the bar whilst wearing your Casio is that the F-91W and related models were identified by the US Goverment as an indicator that the wearer may be a terrorist........
‘The possession of a Casio F-91W model watch and the silver-color version of this model, the A159W, is an indicator of al-Qaeda training in the manufacture of IEDs. The Casio was known to be given to the students at al-Qaeda bomb-making training courses in Afghanistan, at which the students received instruction in the preparation of timing devices using the watch.’......Now these watches are really reliable quartz watches with a timer which can be set for 23:59:59, they do sadly lend themselves to making IED’s. These watches are also pretty water resistant, so don’t need to be taken off whilst washing before prayer. I am not condoning any form of terrorism but the fact that Casio watches are so reliable that the CIA have classed them as an almost outlaw watch speaks volumes for their reliability.

Casio watches have seen a resurgence of late and people of all ages are wearing them, from the much ridiculed Hipsters to the Roadmen here in the UK. To briefly sum it all up though, I wear my Casio because it does the job it is intended to do and has never failed me as a time keeping device. It is not an over the top item and blends in the background with whatever clothes or uniform I have to wear that day. I also get a nice dose of nostalgia when I look at my watch and it does make me smile. Now I’m not denying that there are some really decent watches out there for under £300 or far over that price for that matter and it is not my place to tell others how to spend their money but for cost effective simplicity I do not think a basic Casio can be beaten, do you?

It's funny that when I wear it, which is all the time when I'm not at work, I get so many compliments, much more than the more expensive watches I have. I've been wanting to get another one and keep saying, "when this one dies" but the bugger keeps on going! Tough watch.