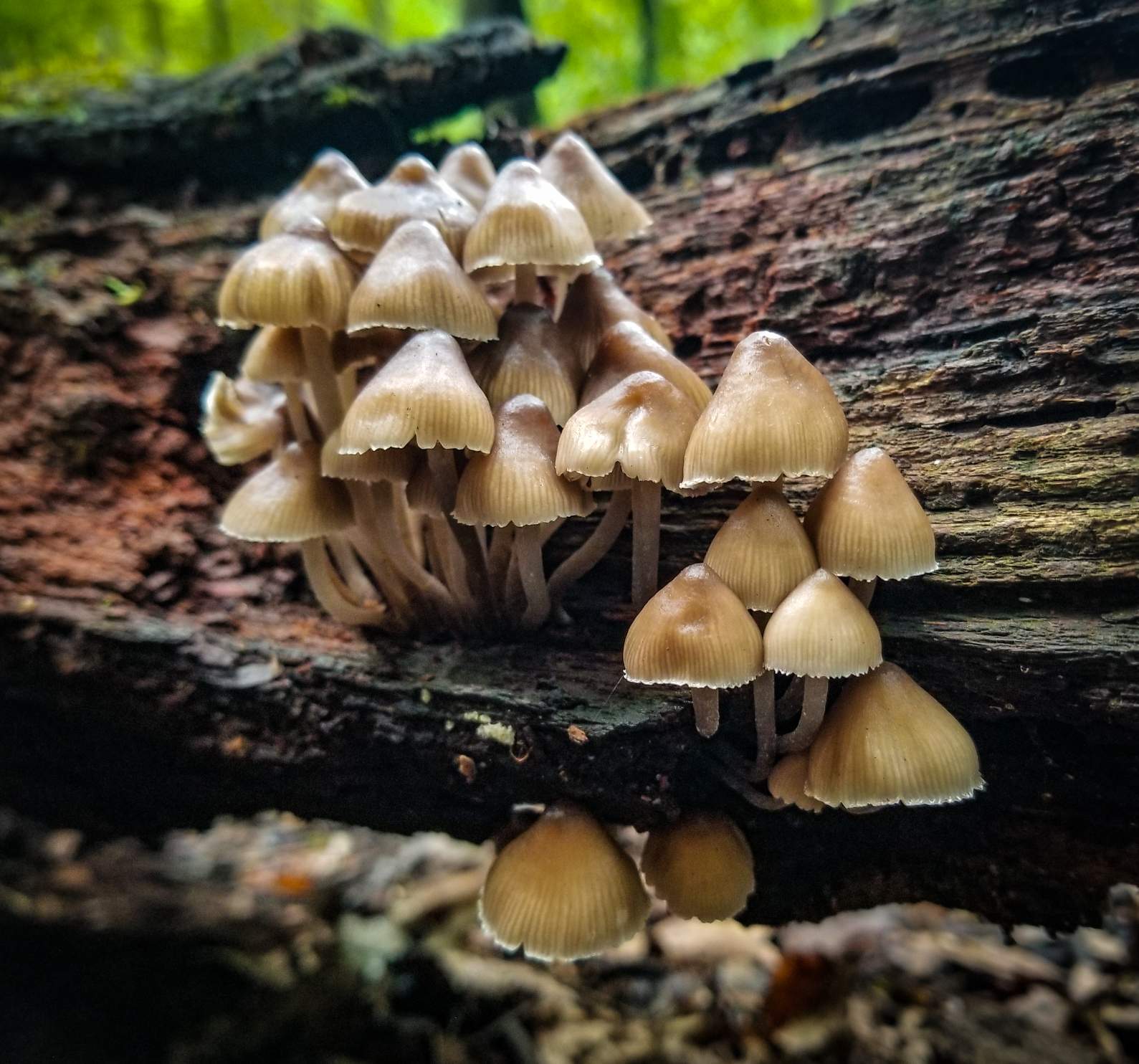 Here's some standard mycena. These are one of the most common mushroom I find. Most dead logs in the forest tend to have these on them after a rain.

Here's some black jelly roll. The latin name is Exidia glandulosa. This stuff is actually edible but requires alot of lime and spice to give it any flavor. I find this on broken branches on the forest floor after a rain. You can gather this and dry it for future use in soups.

Here's a batch of mica caps. These are edible as well but they disintegrate easily when fried. These work best in a soup. Only harvest these from clean areas since these mushrooms can absorb heavy metals left over in industrial areas.

Here's another shot of the mica caps. One of the identifying factors are little shiny glinty beads on the top of the caps hence their common name.

Here's a smashing of dryad's saddle. They morph together if they grow too close to eachother.

Here is another example of false turkeytail. They often have different colors similar to turkeytail.

Here's an interesting purple crust fungi probably in the Corticioid family. The purple color might even be from another fungi growing on top.

Here is some edible split gill fungi. This one is interesting as it can be stored over long periods of time and is pretty dry. To cook it just soak it a while in water then boil or fry it. It is popular in asia.

Here is some hexagonal polypore.

Here are a couple yellow amanita muscaria. I rarely find the iconic red ones here in the midwest but these yellow ones seem to grow more often towards fall.

Here's a strange polypore growing out of the top of a dead log. These tend to grow as shelves on the sides of trees so maybe its orientation is causing it to be a bit deformed.

This is what the shelf polypores typically look like.

Here's a shot of some peziza badia growing in downtown Chicago.

Peziza is a strange cartilage texture cup fungi that has sandy spores in the cup.

Here is a strange new mushroom I found in 2019. I forget the latin name.

It is a very thin mushroom with a totally smooth underside.

Finally here are some jackolantern mushrooms. I wish i had harvested some to take a long exposure photograph. These guys glow in the dark. That's it for this #mushroommonday

Great photos!
And a very informative post.
You struck me with a variety of photos of mushrooms!
No, this is definitely not fair, I need to urgently fly to you for photos !!!
-))))))

Do you have any forests near you? Whenever it rains i head out into the hardwood forests to look for shrooms.

Unfortunately no ...
In Cyprus, the forest (and that is small) is mostly coniferous, only on the mountain.
It is by car (from me) 4-5 hours drive + on the mountain the roads are narrow, winding and at a cliff.
In 30 minutes by car (from me) there is a small section of the natural area. He is guarded. Here I go for photos and walks with my girlfriend and her children.
Almost 6 months in Cyprus are hot.
And in the summer a lot of greenery burns out due to the high temperature. Often there are fires ...

yeah that makes it tough for mushrooms, sounds like Cyprus is alot like Arizona where I grew up. Too hot and dry for mushrooms other than some black puffball mushrooms that were poisonous lol. Though up in the mountain far away there were some edible mushrooms.

I agree with you.
Due to this heat in Cyprus, sparse vegetation ...

All I can find lately are inedibles.

Those are edible shaggy mane, though only harvest them from wild areas since they can pick up heavy metals. They taste best in a soup. If you try and cook them in a pan they get soggy and fall apart. Also the tasye isn't too special thus i've only tried them once. Latin name is Coprinus comatus.

Wow!
It's funny, usually when I look at these mushroom/fungi posts everything seems exotic. So many of your specimens look familiar.

I used to wander around a forest (Hudson Valley/New York/Shawangunk region) with my siblings when I was very young. All of this natural wonder was part of the background. We had a sense of ownership. It was our forest, our trees. I'm sure I saw countless turkeytail, and mycena. Even pretty sure I saw dryad's saddle.

We wouldn't dream of eating anything we found--except wild raspberries.

Yeah lots of them are edible. I like to harvest elderberry and wild rasperries here too. Then there's tart mini blackberry things too.

We liked your work and hope that you'll continue to post similar articles describing biodiversity in the future as well.

We'd love to invite you to our newly created discord server.