This is the 2nd challenge to celebrate the release of the Splinterlands Untamed series. Join now and you might win an Untamed prize!

Last week, I launched the first edition of the Untamed Challenges to celebrate the release of the brand new Untamed series in the coolest blockchain game around: Splinterlands.

I'll be posting a new challenge every week. You have until post payout of the challenge post to write your entry and leave a link to it in the comments section underneath this post.

The challenges won't take up a lot of your precious time. On top of that, they will be pretty easy so everyone will be able to join.

Every week, one or more prizes will be distributed.

You can read more about this week's challenge below.

For the very first challenge, I asked the participants what their favorite card art was. Lots of amazing designs in the Untamed series to choose from, that's for sure. The awesome Cornaelus came out as the big winner. Not a real surprise, because the card looks a-ma-zing.

All participants received some tokens of appreciation and an upvote from my @monstermother and my main account.

Deserving entries also received a generous upvote from the @battlegames acocunt and the @monster-curator voting trail. I really appreciate you guys hopping in and giving out some extra rewards.

As promised, I'm also giving out a gold foil Orc Sergeant. Not exactly the best looking card of the bunch, but a beast in battle.

Congrats, @agr8buzz. I'll be sending the card to your account.

My initial idea was to do something with the new abilities this week, but while I was writing, I realized it might be just a tad too soon for everyone to have played around with those. Since only 10 days have passed since the release, I wanted to keep it a bit more general.

So, this week's challenge:

Which Untamed splinter do you like the most and why?

How To Join This Challenge?

Here are the steps to follow to create a valid entry:

I told you it would pretty easy ;0)

1 - Everyone who sends in a valid entry will receive a vote from my @monstermother account that has almost 13k SPT staked. I'm in the process of adding BATTLE tokens to that account too.

The size of my vote, however, will depend on the quality of your post.

Keep in mind that if you put some effort in the post you create, there will be a good chance you'll be noticed by one of the great SPT/SM curation trails!

2 - Every participant will also receive a token of appreciation. The nature of this token may vary. (Beer, DerangedCoin, Shade, etc.)

3 -The weekly prize will be rewarded to the post for which the author followed all the rules (stated above), and which sticks out above the others. Originality, humor, a great layout and clear, complete and reasonable explanations are important things to keep in mind.

I'll be sending out a gold foil Failed Summoner card to this week's winner.
This baby has magic reflect for only 2 mana. The perfect addition to your team if you want to counter those magic attacks.

I can't wait to see your entries.

As an example, here's my own entry for this second Untamed-challenge:

It was not an easy choice, especially since everything is still so new. I noticed I haven't used the Fire splinter a lot yet. I guess I still have to find my way around it.

I have never like to play Life, and I probably never will, even though I must admit the Untamed collection makes the splinter a lot more attractive.

There are some awesome additions to the Water splinter, and the Dragon splinter is really bad ass, but for now, my preference goes out to Death and Earth.

I guess I'd have to say Earth.
Earlier this week, someone mentioned in the Maverick's House in the Splinterlands Discord channel that the Untamed Earth splinter was a bit on the weak side, but I strongly disagree. 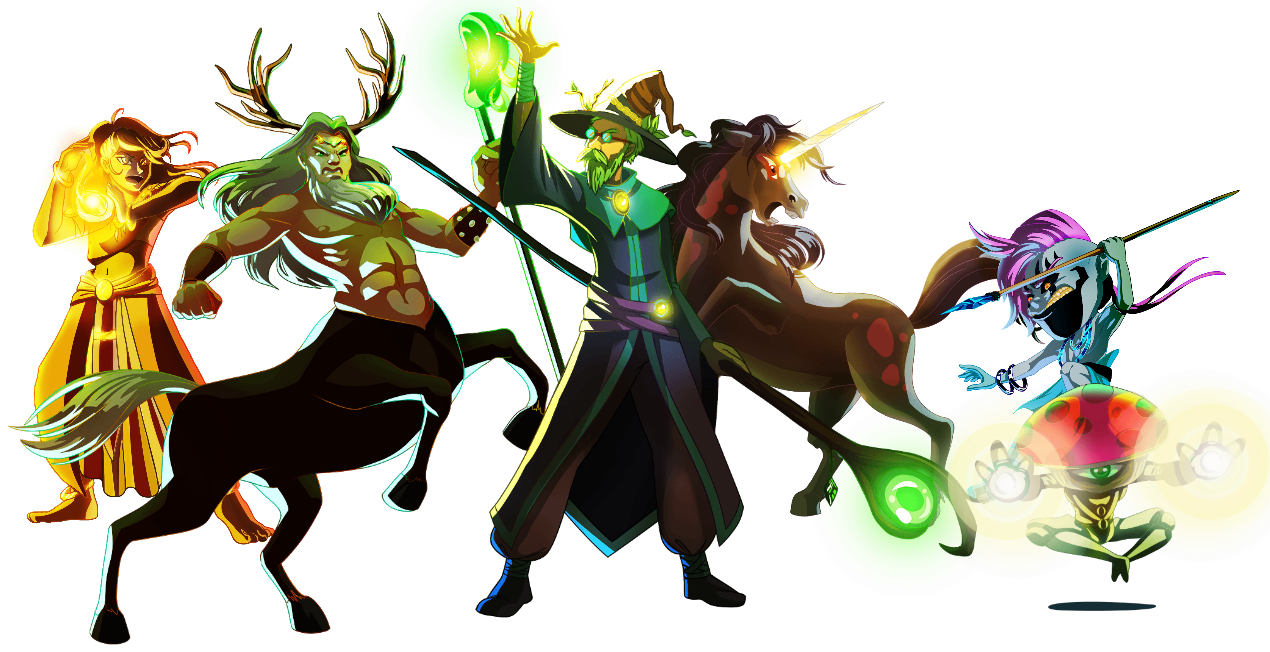 It all starts with my favorite new summoner ability: the Wizard Of Eastwood takes away 2 shield from all enemy monsters. Finally there's a way to make that annoying Life splinter a bit weaker. Combined with the Rust-ability of the Sporcerer, there's some serious damage to be done.

The Earth splinter now also has 2 magic reflect monsters. The Failed summoner gets this ability right at the start, while the unicorn Mustang gains magic reflect at level 5.

The beautiful Khmer Princess gets tank heal at level 4, which makes her the third tank healer for the Earth splinter, next to Wood Nymph and Spirit Of The Forest.

That's a whole lot of defensive power, if you ask me.

But Earth is more than defense...

Mitica headhunter is so powerful - she has 4 ranged attack at base level - I've seen people using a level 1 in their maxed decks... and be successful with it. It's a super strong card.

Kron the Undying.... He's a beast. I haven't had the privilege to play him full power yet (I only maxed the card yesterday), but I did try it out in silver league, and boy, I was really impressed. 3 magic, 10 health and self-heal at level 1 makes it so super powerful. At level 3, it gets the new ability 'Last Stand', which means that when he's the only monster of a team left, his stats increase. Someone posted a battle, and I saw him go up to 18 health. Now, if that isn't bad ass, I don't know what is.

Maybe my preference will change once I get to know all cards a little better. Heck, there are cards I haven't even played yet, so what do I know?! :0)
But so far, Earth is killing it in my opinion.

Now it's your turn. I truly hope you'll accept this challenge. Let us Know what your favorite splinter is (and why) and you might take home the gold foil prize!

Don't have a Steemmonsters / Splinterlands account yet?
Create one by clicking the banner below:

Thank you for supporting @CatsMakeKittens by being a part of our community @simplymike.

Whoo-hoo! Thanks for hosting these cool challenges and for the Gold Orc,..ma lucky day! ⚔️

My favorite splinter are the Mushroom Monsters. Shrooms...

Congratulations @agr8buzz
Best of luck to all participants for new challenges

You have been manually curated by the @steemmonsters team!

Thank you for SHARING your Splinterlands content with the world! The more the merrier!

And dude... this is like a post within a post. 🤩
I also think the new cards' abilities really help to even out the perceived imbalances between the Splinters. Honestly, I liked that... you know? That certain Splinters were better at certain things. Now... with so many more monsters coming, it will even out (as the splinters start to intermingle with each other) and decks will be basically what you favor/prefer. And amusingly, people will SWEAR that their Splinter is the best and X Splinter is the worst. I love it.😍

Now, that said... I've not played a lot with the new cards yet... but from a lore perspective: Kron is a badass. He was written (born?) almost two years ago and is just now making his debut as a card.

Thanks for holding these contests and writing great posts!
😍 @carrieallen

I completely agree that the new cards make splinters more applicable for all situations. It's not easy to decide which one to play, lol.

And poor Kron... 2 years before he could come out of the closet. I bet he's glad he can come out and play now. ;0)

Awesome series of Untamed challenges you've got going on here! I intended to participate in the first one but got crazy busy and missed out. I was determined not to let that happen this time. haha. For my entry I decided to record a YouTube video giving my answer and then I embedded that video into a new post here: https://steempeak.com/@crypto-spore/splinterlands-ccg-my-favorite-untamed-splinter I hope you enjoy it! Please let me know if I made any errors or if I missed any of the required items for entry. Looking forward to participating in your future challenges. :)

Thanks a lot for joining!!

Hey @crypto-spore, here is a little bit of BEER from @simplymike for you. Enjoy it!

And here is the link to my post 😉
https://esteem.app/untamedchallenge/@cicisaja/untamed-challenge-my-favorite-s-splinter

Im in.. because I have been playing with them and thanks to you @simplymike 😉

Thanks for joining again, @cicisaja

You just received DERANGED @cicisaja Keep up the great work, view all your tokens at steem-engine.com

I got slaughtered by one of those Last Stand monsters... I really thought I had the game soon, and then... Oh crap...

Here I am with my entry... although, favourite might be stretching it a bit!

I love those dragon. Thanks for joining!!

You just received DERANGED @bengy Keep up the great work, view all your tokens at steem-engine.com

You just received DERANGED @guurry123 Keep up the great work, view all your tokens at steem-engine.com

Lucky you @simplymike here is your COFFEEA, view all your tokens at steem-engine.com Vote for c0ff33a as Witness

@simplymike, I am late but i wanted to share my piece and now it's here. Kindly find my poetry piece below for your reference.

Keep up with these awesome initiatives. Stay blessed.

You just received DERANGED @chireerocks Keep up the great work, view all your tokens at steem-engine.com