The Interceptor by Boyan Slat - Cleaning the rivers of plastic! 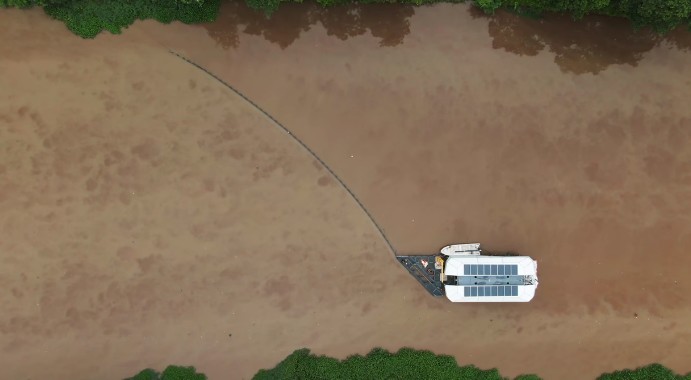 I am a big fan of everyone that works for the environment, and who does a job to make sure that this earth will be a nice place to live on, not only for ourselves in 30 years, but also for kids and grandkids who will live in 50-80 years from now.

One such person is Boyan Slat, a Dutch wonderboy, who at the age of 16 invented a machine that would help clean the seas of plastic. He got the inspiration to do so after diving in Greece, only to discover more plastic bags than fish. So, he started to invent and work with cleaning the seas of plastic, and now he has created a new machine called The Interceptor. Take a look at the video beneath to learn more about the interceptor project and see how it works in real life.

The Interceptor does what the name says... it intercepts. Because most of the plastic we find in seas today get there through rivers leading the garbage into the large seas. So, what better way to clean the seas than by stopping the garbage from getting there in the first place.

They have already created a few interceptors, and the goal is to have 1000 interceptors up and running within the upcoming five years. This will help stop much of the junk from reaching the oceans, and combining this with the already existing "cleaning the ocean" projects ran by Boyan Slat and many others, this has the potential of actually helping out a lot.

Lots of people are worried about whether or not the nets will catch fishes and destroy animal life. But, the net that gathers the garbage is only 0,5 meters down into the rivers, meaning that most fish will swim at deeper levels, and thus, avoid the garbage net. Plastic, however, often floats on the surface, and will then be easily gathered by the interceptors.

Defended (100.00%)
Summoned by @siggiboy81
Sneaky Ninja supports @youarehope and @tarc with a percentage of all bids.
Everything You Need To Know About Sneaky Ninja