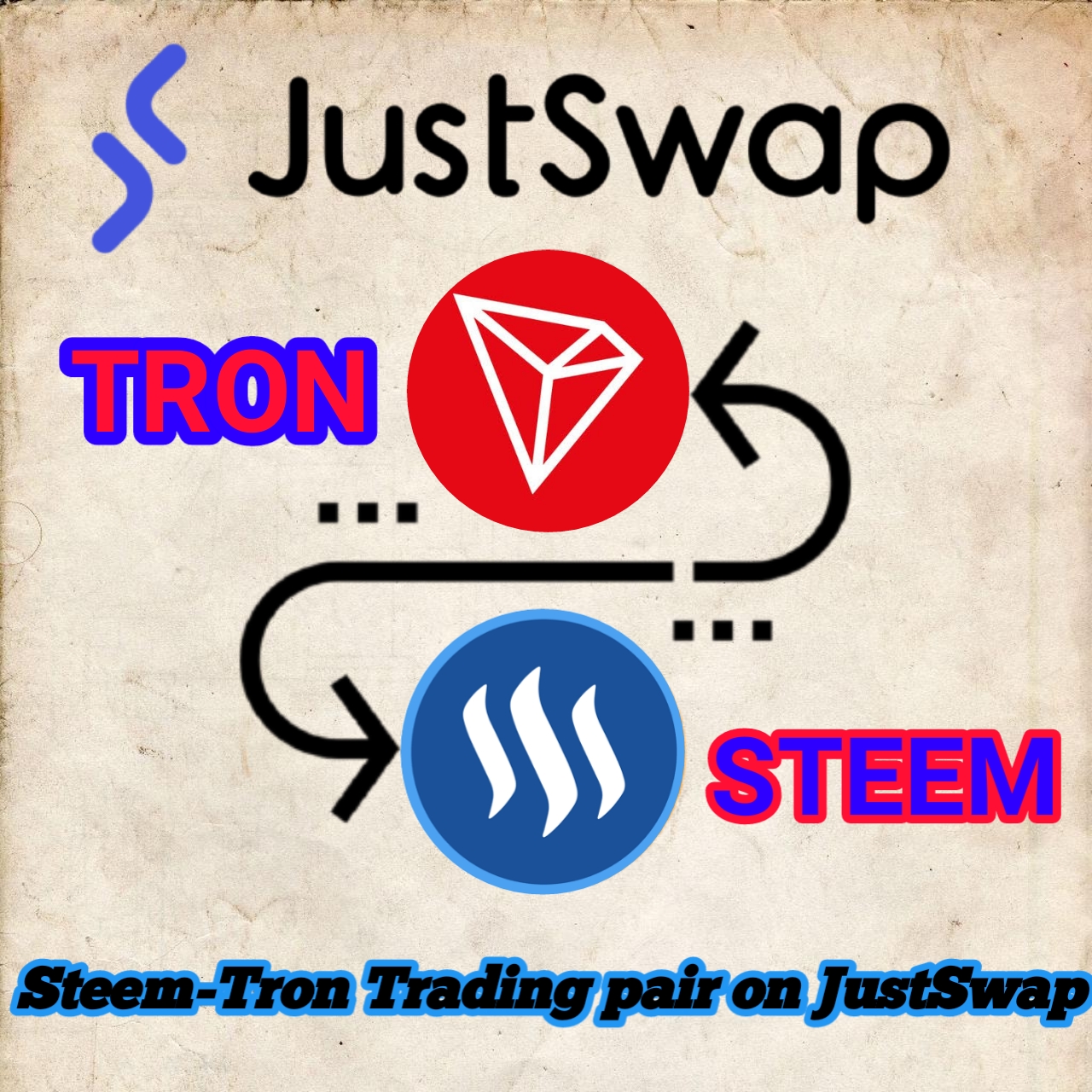 The dream is a Steem-Tron Trading Pair on Justswap

The reality is currently a different path.

One path to take to the Tron DeFi ecosystem is to send your Steem to an exchange, swap it for Tron, then send your Tron to your Tron wallet, for example the TronLink wallet. Then you can swap Tron for SUN, JST or USDJ and you can profit from Liquidity Pools on JustSwap or CDP’s on Just.

Steem can’t currently be traded on dApps based on Tron blockchain like Just or JustSwap.

And while a simple way of you utilizing the financial applications like JustSwap on the Tron blockchain is to trade Steem for Tron on an exchange, that process does little to nothing to improve the price of Steem.

However, you can get a Tron blockchain tradable version of Steem on Tron, just like people are trading versions of Bitcoin on the Ethereum blockchain.

But someone needs to write the smart contract creating wrapped Steem and create a safe place to store the Steem which gives value to the wrapped Steem.

The wrapped Steem, like the wrapped Bitcoin, only has value because it represents the value of a real Steem or a real Bitcoin token being held by a custodian.

So in the same way that the people who made wrapped Bitcoin ERC20 Tokens depend on someone to hold the real Bitcoin in a Bitcoin wallet or Repository we would need someone to do that for us.

But, if you have someone hold your Steem, while you trade the TRC20 version, you must be aware that they could take your Steem and disappear. So be #careful who you trust and trust only what you can afford to lose, if that happens. This is cryptocurrency, so keep your eyes wide open.

Why wrap Steem and change it to wrapped Steem, instead of trading Steem for Tron and using Tron?

I we support a wrapped Steem to Tronn trading pair on Justwap in a LLiquiity pool, Liquidiity Pool investors will com to profit from the pool. This exactly what happens on Uniswap and this has increased the price or value of Ethereum and the price of the Tokens in the Liqquiity pools.
So you could profit along]e by trading for Tron or you can help inccrease the value of the value of Steem you will earn in the future, and potentially help everyone. But this comes with some risk.

Win for both Tron and Steem

Uniswap and similar dApps / applications based on Ethereum have 1-2 billion USD locked in various Liquidity Pools on Uniswap, Avava, and several others. The Ethereum Token has gone from a low of 90 USD to a high of 400 USD this year and looks to go higher.

Tron coupled with Steem Liquidity Pools might be the event to signal a bull run for both coins.

Several options are on the horizon

The posts I have read ggest a #Project t W is in the works by some developers here on Steemit to create wrapp Steem.

There isis also information suggesting that some form of Steem wrapping process is being wd on by #Tron-Ste-Steem developers, so we may have two good options as well in future. It’s possible we could wrap it in our Steem wallets, just like we power up our Steem as SteemPower. Then we could be our own custodians. But I don’t know if someone could be incentivized to create that wallet.

I sug suggest you read all options and understand some are trust less and others may involve trusting others with your Steem, so be careful. All new things are new, so problems may arise, invest what you can lose.

The increase in the price of Bitcoin and Ethereum this year is one of the bright spots in 2020. If DeFi increases the value of Steem and Tron, it brings value to the Steem-Tron for everyone Content creators, Content curators and investors.

Lastly, we are no longer Steem or Tron. We are Steem-Tron, our futures are linked, let’s make both our futures bright.

This could be good if it could happen.

I agree it would be wonderful if this could happen.

Aloha to you @shortsegments
You have explained this complicated subject in easy to understand terms. I understand now, why there is no Steem-Tron trading pair on JustSwap!

I also feel very good about the way you explained we can trade on Justswap now and also explains how these may improve in the future.

This was very encouraging and I liked your last comment that we are not Steem or Tron, we are now Steem-Tron. We should support the DeFi efforts on Tron by using the dApps there Just and JustSwap for DeFi.

Thank you very much @shortsegment for this detailed explanation. At first I was confused about how to exchange from steem to Sun Tokens on the Tron DeFi. Actually, I'm thinking about how to get my Tron wallet. I believe this integration and of Sun stake, Tron DeFi, smart contract and steem exchanges for tron are to increase profitability. Thanks so much once again.

Your welcome, I am glad you found this valuable. May we pool our knowledge for our shared benefit.