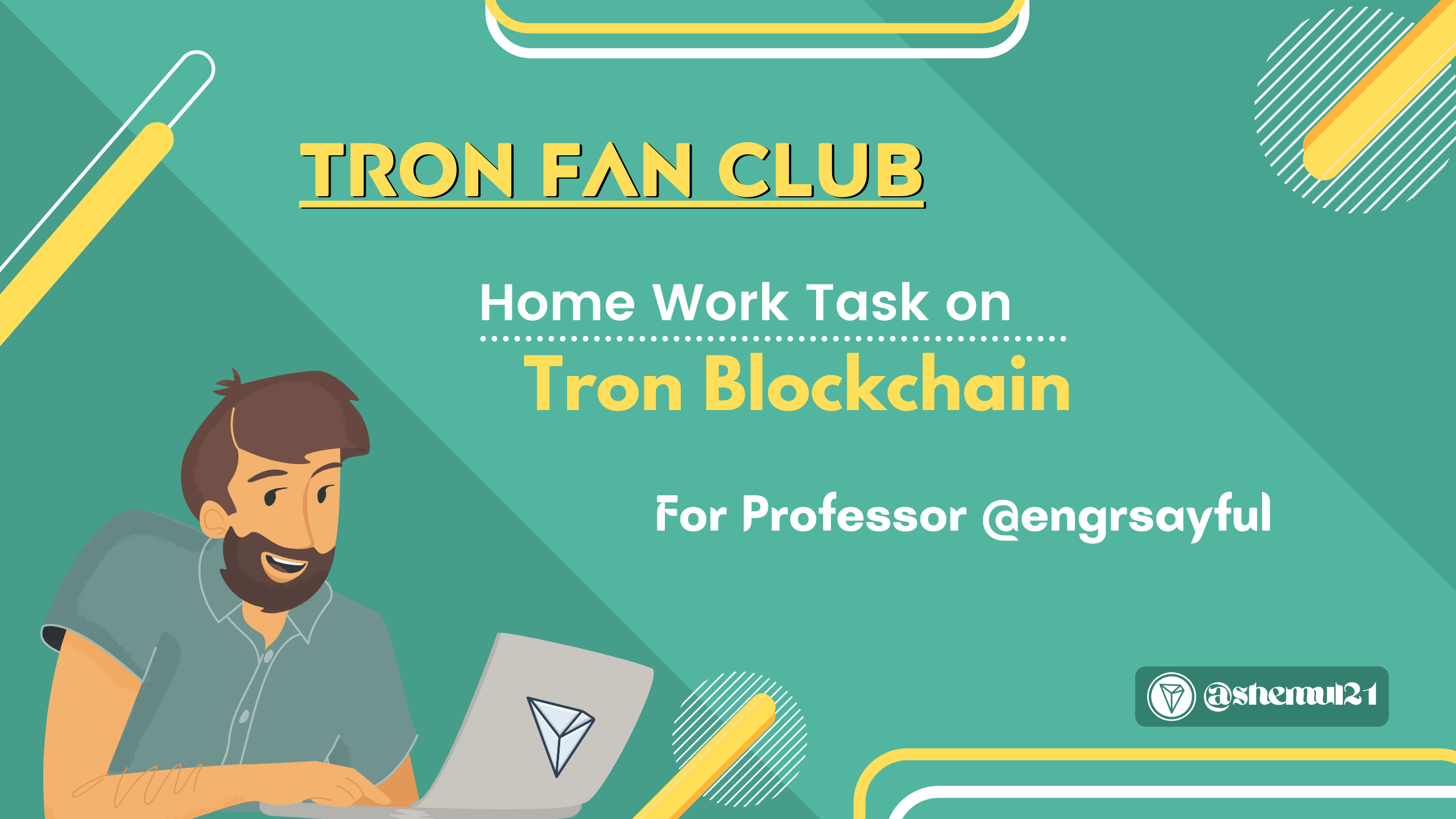 I'm very glad to participate in this homework task arranged by Professor @engrsayful. This is my first post on the Tron Fan Club. Before my participation, I read all the posts and learned a lot. So let's start.

Image designed in Canva | by @shemul21

Q1: Why and How Steemit Users are getting TRX?

STEEM Blockchain's native token is STEEM, and TRON Blockchain's native token is TRX. At the start of our steem blockchain, steemit users were given only steem and steam power. In the year 2020, they began to give users an extra bonus trx by integrating trx with Steem. So, as a steemian, we are getting bonus TRX tokens for performing all of the normal tasks like blogging here on steemit. 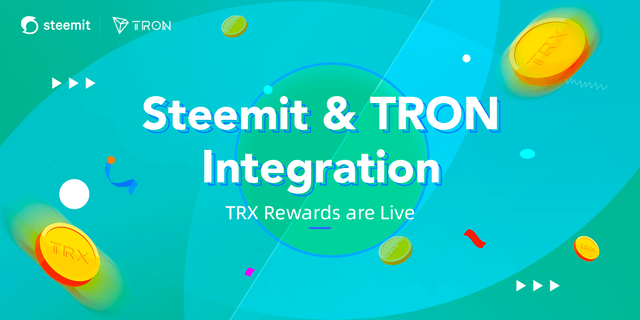 The author who writes a post on Steemit and the curator who votes on the posts are both getting rewards here. The author gets a 50% reward as SBD and a 50% reward as SP. But the curator gets the entire reward in SP. After the integration with TRON, we are also getting TRX in proportion to the amount of Steam Power.

When Tron is integrated with the Steemit platform, users who register their account will receive a TRON wallet address as a security tool for their steemit account. TRON accounts can be created in a variety of ways. We can easily create a TRON account on steemit by following the below steps.

Step1: First of all, I've signed in to my steemit wallet using my private active key. Here it's showing my TRX amount, TRX address, and two options that are:

To create a new Tron Account, I've to select the first one as seen in the above screenshot.

Step2: By clicking in Create new Tron Account we'll get a pop-up window like the below screenshot. 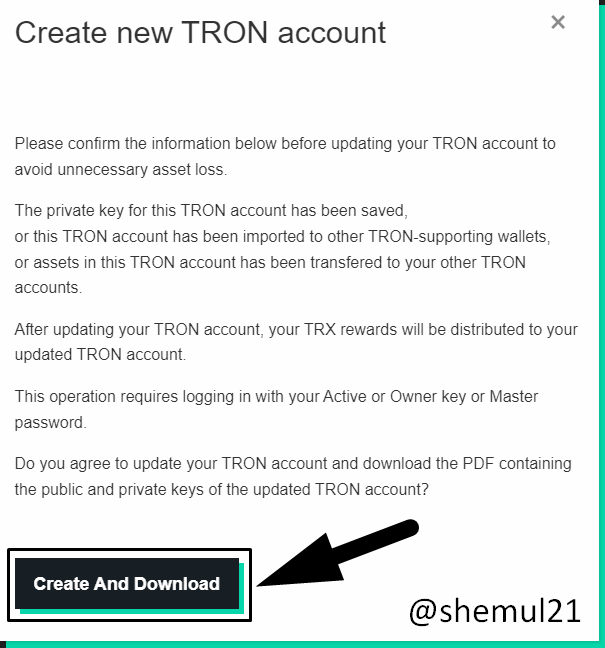 Step3: I skipped but this is how a new user can create a Tron Account. After clicking on the Create and Download, it'll generate a PDF file where we'll get the Public and Private Key. It's always recommended to store the Private Keys in a very secure place. 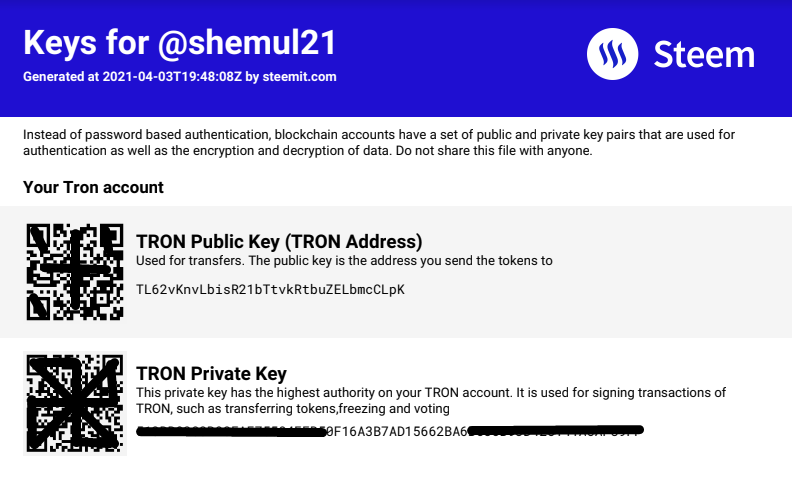 Q3: How can link your existing TRON account with STEEMIT?

The TRX tokens we receive as a bonus with SBD and SP for every post. It is mandatory to link a Tron account for further use of these tokens. Let's see how to link the TRON account with STEEMIT.

Step1: After signing in to my steemit wallet, I've copied the public key and clicked on LINK AN EXISTING TRON ACCOUNT like the below screenshot.

Step2: Here I got a pop-up window with a confirm button. And I clicked on the button. 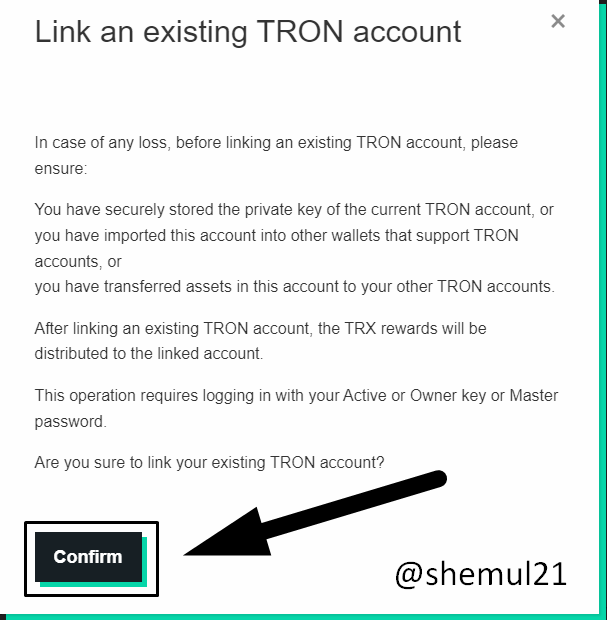 Step3: A new window opened and I'm asked to fill an empty box with the public key(TRON account address) that I copied in the first step. I entered and clicked on confirm. 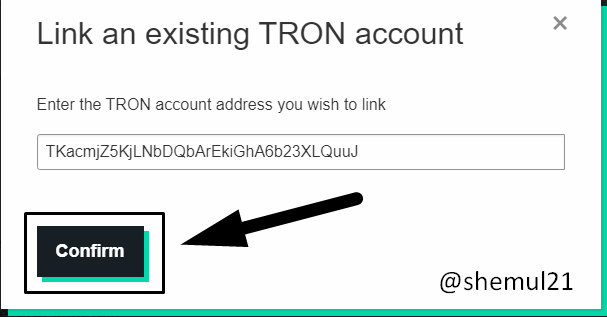 Step4: At last, I got another pop-up window with an empty box where I had to enter my private active key and clicked on the Confirm button. 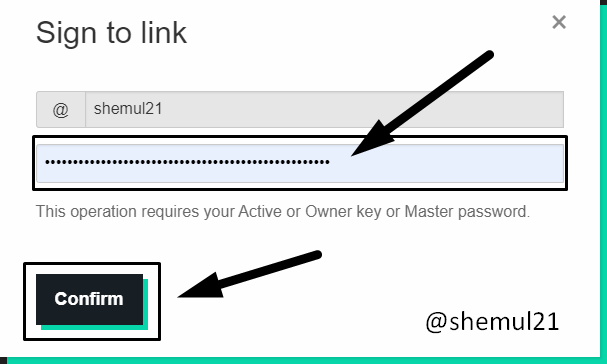 This is how we can link our existing TRON account with STEEMIT. It's really a very easy method.

Before posting any data to the blockchain ledger, a group of people must contribute to data verification in the blockchain system who are called miners. Generally, mining can be done in three ways that are:

Tron Blockchain uses a Proof of Stake (PoS) consensus mechanism to validate transactions. Ordinary users can not get the chance to mine tokens directly in the Tron blockchain. Only the 27 Super Representatives with the most tokens are eligible to participate in the mining process every 6 hours. But there is an alternative opportunity for ordinary users to participate in the mining process by voting for the Super Representatives. It is very similar to the SP delegation process on Steemit.

Q5: How many TRX will be given to a SR for 6 hours mining?

The Super Representatives will receive TRX tokens as rewards from Block Production Rewards and Voting Rewards within 6 hours of mining. In the Tron blockchain, one block is generated every three seconds.

This reward is given to those who have staked TRX and voted for Witnesses. The reward ratio is the same for both rewards, 20% and 80%. The reward for a single block is 160 TRX, which is generated every three seconds. 20% is given to the first 127 witnesses, which is split between 27 Super Representatives and 100 partners. The remaining 80% goes to the voters who chose SRs and Partners.

I've tried to answer all the questions with my own understanding. The lectures are very informative and educative. I want to thank Professor @engrsayful for sharing his knowledge with us. Keep steeming, thanks to all.