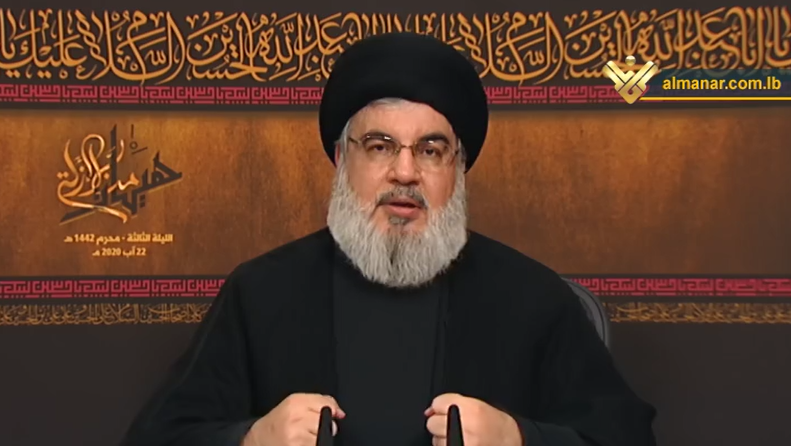 Hezbollah Secretary General Sayyed Hasan Nasrallah maintained Saturday that Imam Hussein could have escaped His religious responsibility and avoided the confrontation which led to His Martyrdom, adding that the Prophet’s Grandson selected the path which protected Islam from Yazid’s corruption.

Delivering a speech during Hezbollah televised ceremony which marks the third Ashura night, Sayyed Nasrallah stressed that assuming one’s responsibilities in helping all the human beings, regardless of their affiliations, is obligatory according to the Islamic values, adding that geographical and political borders must never be a barrier in this regard.

Sayyed Nasrallah stressed that Islam imposes on the believer to help the needy people in accordance with his capabilities, adding that one must use financial and military capabilities to assist others regardless of any ethnic, geographical or political limits.

Sayyed Nasrallah wondered why all US political and military interventions in most of the world countries are accepted, while Hezbollah help to allies in the neighboring countries is rejected.

Hezbollah leader also underscored that as the Lebanese ask all the world countries for aids in cases of disasters and wars, they must not reject that some Lebanese groups help certain Arab countries in the close region, including Syria, Iraq, Palestine and Yemen.

Sayyed Nasrallah confirmed that it was Hezbollah duty to fight ISIL in Syria and Iraq in order to prevent it from achieving any victory and expand caliphate into the other regional countries, adding may foreign armies interfered in battling the takfiri group despite the fact that it was established by the United States.

Sayyed Nasrallah emphasized that Hezbollah will never abandon assuming his responsibilities in Lebanon and the neighboring countries, adding that the party takes into consideration Lebanon’s national interests.

In this regard, Sayyed Narallah maintained that the Hezbollah support to the Palestinian resistance will prevent the naturalization of the Palestinian refugees in Lebanon, adding that the Islamic Resistance victory over the terrorist groups protected all the Lebanese from the danger posed by the takfiris.