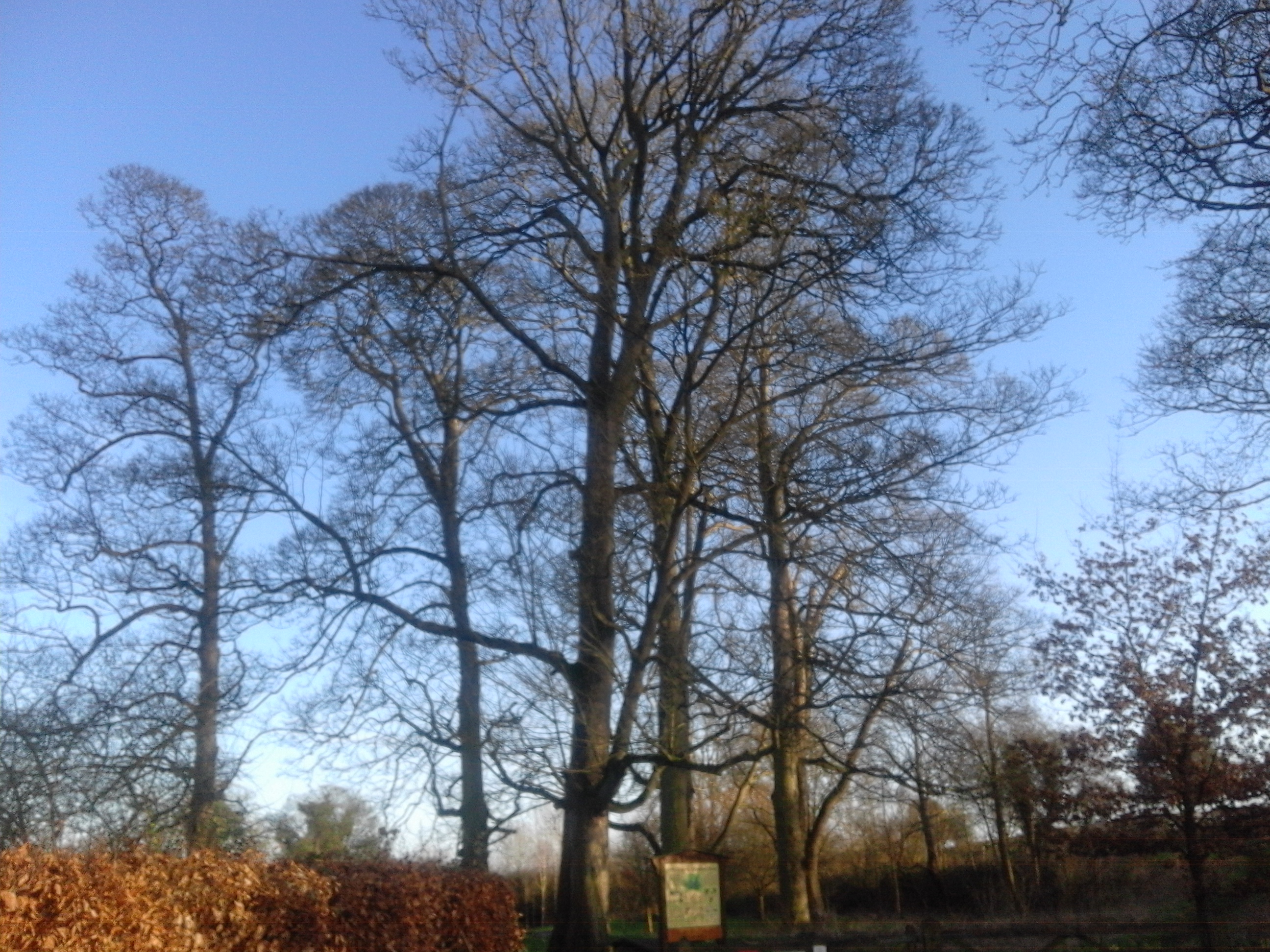 Today I drove about twelve or fifteen miles south to a village almost on the border between Leicestershire and Northamptonshire. It was a beautiful winter's day, very cold and sunny. Somehow, the sky always seems very big in the Midlands of England, at least the East Midlands.

The trees at the entrance to North Kilworth Millenium Green, a nature reserve at the back of Kilworth Belgrave Memorial Hall, next door to Kilworth Bogs, low-lying wetlands which feed into the River Avon.

I was going to a workshop run by the Textend group. It's a kind of sewing club with a workshop once a month. You can go when you like and just pay for each workshop as you go. I met lots of lovely women there: Sue and Ruth, the organisers, D'reen, Bunty, Mandy and Chris, and Debby who, it turns out, lives not far from me and told me about the knitting group at the Cradock Arms pub on Wednesday evenings, a short walk from me.

This month was the start of a nearly year long challenge, to create a piece with stitching, inspired by an artist. There is a special extra meeting in December to share our finished pieces (and, I guess, the story of how they came to be made). There may be an exhibition next year.

Today was a kind of inspiration day. There was a suitcase collection of A3 sized quilted pieces inspired by artists. Escher featured a lot, along with Antony Gormley (three pieces about his installation at Crosby Beach, Another Place), Rothko and Klimt. We had a discussion and shared books and looked at each other's sketchbooks.

It was still bright after the workshop finished and I had time before the light failed to go for a walk in the Millenium Green, which has some rare species in the nature reserve. The geology is interesting, heavy clay layers covered with gravel, with a line of natural springs.

North Kilworth is recorded in the Domesday Book. There was rich farmland around the village, used for rearing sheep and fattening beef for the Leicester market. There were lots of related agricultural industries - machine shops and milk processing plants to supply London.

I took a few photographs of the quilts. I'll be sharing these in future posts as I start to create my sketchbook. Although there were many lovely works, I took photographs only of pieces that triggered some sort of response in me. Just four in all (of about sixty items).

I wrote in my first Health Goals post about developing a gentle evening practice, preparing me for rest. That's been going pretty well. I struggle on the days I work in London because I arrive home about the time I would falling asleep on other nights. It takes me a while to get settled.

I wanted the early evenings to get my mornings back, and to enjoy the day, rather than desperately hacking through it. Although I had done some making last year, it had got lost among all the other things that were happening. I'm trying to get back in the groove. Today was a start.

It was very nice here in London today as well. Very cold, but beautifully sunny. I was going to get out and do something with it, but I ended up indoors for most of the day.

Sounds like a pretty artsy challenge. I don't know if I have the attention span, or sophistication to do something like that haha. I'm fully part of the quick quick quick instant gratification society now LOL.

That "Another Place" exhibition, it would be incredible to see that in real life.

Haha - one of the women told me it would be "nine months of thinking about it and two weeks of doing something"!
The installation is pretty amazing and interesting to see at different times/tides of the day and year. Did you see the remembrance installation at mersea island? I hear that was good, too.

Your project really sounds interesting. I like geometrical forms and quilts inspired by Escher or Klimt would be right up my alley.

I had a creative afternoon, too. A friend called me at noon, if I had plans for the afternoon. Well, not really and then she told me about a needlework afternoon in a nearby village. It was organised by the "Landfrauen", an association of women in rural areas (used to be mostly farmer's wives etc., but now it's dedicated to boosting the cultural life outside of the big cities). Anyway, the local chapter has a small café that's open on weekends and once a month they have a needlework afternoon.

The pictures on their homepage show that there is a big social aspect to it: having a cup of coffee and perhaps a piece of cake with friends is as much part of the German culture as tea is of the British life.

And you can clearly see that knitting is for grannies here - but we spent some interesting hours ;)

I agree, there is a big social aspect to cultural life here, too. I remember cake as a distinctive feature of my first trip to Germany when I was about ten 😍

The quilts were really interesting - there were big differences in creativity and skills. In about half the cases, you knew the inspiration (they were "big name" artists), others were more inventive about how they interpreted the artist's works. Some were new to me, which was good.

Your afternoon sounds delightful, it's always fun to do something on the spur of the moment.

My sister made a nice quilt for my daughter at Christmas. It features some dresses and other stuff from her childhood. My daughter is getting into sewing too. She has a machine and tried making a basic dress.

Being able to make your own clothes is a very useful skill to have. Apart from the sustainability aspects, you can get something that actually fits! I hope she enjoys using her machine.

Thank you @helpiecake, good to see you :)