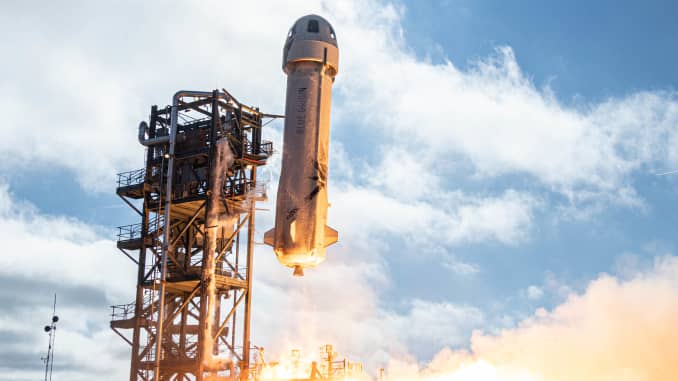 Jeff Bezos’ space venture Blue Origin announced on Wednesday that it will launch its first astronaut crew to space on July 20.
The company has yet to open ticket sales or release pricing information about New Shepard flights, but will host a public auction for a seat on the first crewed launch.
New Shepard is designed to carrying as many as six people at a time on a ride past the edge of space.

Blue Origin has yet to open ticket sales or release pricing information about New Shepard flights, but will host a public auction for a seat on the first crewed launch.

A sealed online auction will run until May 19 and bids can go up to $50,000 – with the company requiring additional identification information and a $10,000 deposit for higher bids. Then, from May 19 onward, Blue Origin will hold a public bidding process – before a final live online auction on June 12.

“We’re auctioning off the first seat to benefit our foundation Club for the Future,” a Blue Origin video said.

New Shepard is designed to carry as many as six people at a time on a ride past the edge of space, with the capsules on previous test flights reaching an altitude of more than 340,000 feet (or more than 100 kilometers). The capsule has massive windows to give passengers a view, spending a few minutes in zero gravity before returning to Earth.

The company has yet to fly New Shepard with passengers on board. Blue Origin has test flown the rocket and capsule more than a dozen times to date without crew, including a test flight last month at the company’s facility in the Texas desert.

Jeff Bezos takes a look at the New Shepard rocket booster on the landing pad after a successful NS-15 flight and landing in April 2021.

The rocket launches vertically, with the booster detaching and returning to land at a concrete pad nearby. The capsule’s return is slowed by a set of parachutes, before softly landing in the desert.

The New Shepard crew capsule lands in the West Texas desert after the NS-15 mission on April 14, 2021.

Blue Origin’s announcement comes on the 60th anniversary of the Mercury-Redstone 3 flight, which carried astronaut Alan Shepard – after whom Blue Origin named its rocket system – on the first U.S. human spaceflight in 1961.

Additionally, July 20 will mark the 52nd anniversary of the Apollo 11 moon landing.

If you have not already done so, you should head to the newcomers community. Not only will you earn money through upvotes, you will learn about content etiquette;

You are currently in Stage 1 of our 4 Stage Process:

👉 Stage 1 - 1st Warning - Pointing offenders towards Achievement 3 and highlighting this process. All plagiarised posts currently pending rewards will be flagged and downvoted to $0 rewards.

Stage 2 - A Final Warning - Another request to stop and that plagiarism will not be tolerated. Downvotes amounting to 20% of total pending rewards according to steemworld.

Stage 3 - A stronger message - Downvotes amounting to 50% of pending rewards.