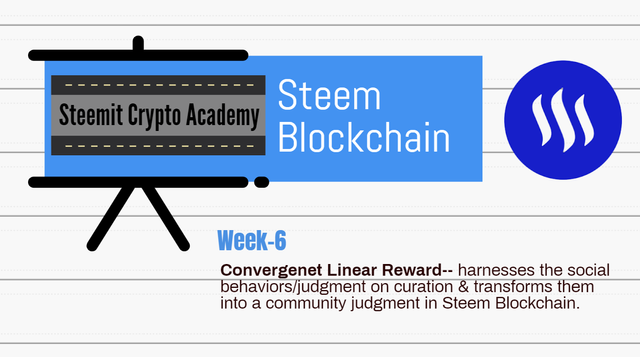 -I thank professor @sapwood for this incredible lecture that he has given us, as a last assignment here I share with you what I could understand from this class.

(1) What are the economic & social ramifications of self-upvote in Steem Blockchain? Do you gain better curation rewards by upvoting others as compared to self-upvote? (Include real examples)

-According to my understanding, I can say that the economic and social ramifications are the quadratic / superlinear equation, the linear equation and the linear convergent equation, it is about the different types of rewards according to the SP/VP of a user. Evidently at the beginning of Steemit, the value of the self-vote was higher in comparison to the vote given to another publication, which disappointed a lot of new users, because it was very difficult for them to grow within the platform, only those who were at the top grew.

-Thanks to the change they made in 2019, that behavior changed, so that now users earn more rewards when they decide to vote for other users' posts. And that is the purpose of Steemit, to publish valuable content and value with positive votes the good work of other users, is the way the blockchain platform is growing every day.

-The difference is that the isolated judgment, as its name indicates, is the determinant decision made by an individual user to vote for a random publication, and individually, it is something that generates a lower reward, whereas with the community judgment in the curatorship, better rewards are received when the curators agree, and decide to vote for the same publication, and when they reach an agreement with the community, they achieve a better reward for all voters, which is what is called the convergent linear reward curve.

-The way in which the community's judgment is adapted, is in a real search for quality content, which is what generates value to the Steemblockchain platform, curating quality content, where everyone wins through the convergent linear reward and this makes this content stay at the top of the top and in turn becomes well voted and valued content by the community. Therefore, it generates an economic incentive, because a publication voted by a whale is synonymous with a higher reward for the curators, if they vote it at the right time.

-In my case, I still do not have enough voting power and my SP is very low is 30, that is, I still do not have a positive value in my vote for the other publications, but I can benefit in a small way, by voting content with high valuation by the curators with higher SP. Here is my example of the vote, before and after.

Payment of less than $10 before voting

Payment greater than $100 before voting

Payment greater than $100 after voting

**The separators are of my authorship

Thank you for your great support!

Thank you for attending the lecture in Steemit-Crypto-Academy & doing the homework task-6.

How do you adapt to community judgment on quality content in Steem Blockchain?

There is no such negative value regardless of what your SP size is.

What are the economic & social ramifications of self-upvote in Steem Blockchain?

Let's recollect the principle of curation. The first thing that you do is reading a post. Being a tokenized social platform, here you are incentivized for your social behavior through PoB.

Further, it does not have any economic advantage due to convergent linear reward. If you self-upvote most of the time you remain in the isolated judgment (sub-linear zone in the reward curve). If you upvote others and align yourself in community judgment you earn a better reward(linear reward curve).

In principle, engagement and curation form an interconnected web. Self-upvote will only result in parallel posts, so it does not create a network effect either.

No in this post your upvote value is still zero as your SP is very less.

Refer to this screenshot:-

I have seen many publications that stay in 0.00$ and nobody votes them because they do not have a good reference score, but they are publications with good content.

If they produce good content, but not getting the attention of the community, then should engage as much as they can.

Thank you very much professor @sapwood, for your kind correction and explanation.