Investment VS Speculation: Results to Be Expected by The Intelligent Investor 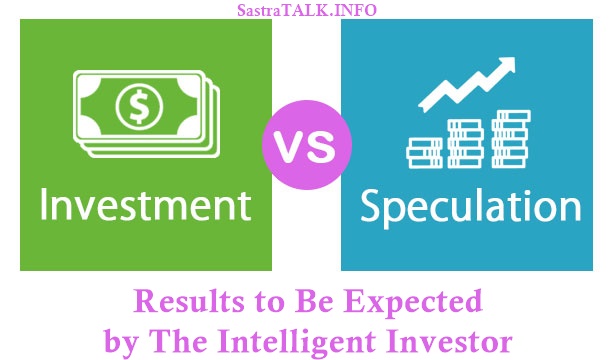 This chapter will outline the viewpoints that will be set forth in the remainder of the book. In particular we wish to develop at the outset our concept of appropriate portfolio policy for the individual, nonprofessional investor.

What do we mean by “investor”? Throughout this book the term will be used in contradistinction to “speculator.” As far back as 1934, in our textbook Security Analysis,1 we attempted a precise formulation of the difference between the two, as follows: “An investment operation is one which, upon thorough analysis promises safety of principal and an adequate return. Operations not meeting these requirements are speculative.”

While we have clung tenaciously to this definition over the ensuing 38 years, it is worthwhile noting the radical changes that have occurred in the use of the term “investor” during this period. After the great market decline of 1929–1932 all common stocks were widely regarded as speculative by nature. (Aleading authority stated flatly that only bonds could be bought for investment. 2) Thus we had then to defend our definition against the charge that it gave too wide scope to the concept of investment.

Now our concern is of the opposite sort. We must prevent our readers from accepting the common jargon which applies the term “investor” to anybody and everybody in the stock market. In our last edition we cited the following headline of a front-page article of our leading financial journal in June 1962:

In October 1970 the same journal had an editorial critical of what it called “reckless investors,” who this time were rushing in on the buying side.

These quotations well illustrate the confusion that has been dominant for many years in the use of the words investment and speculation. Think of our suggested definition of investment given above, and compare it with the sale of a few shares of stock by an inexperienced member of the public, who does not even own what he is selling, and has some largely emotional conviction that he will be able to buy them back at a much lower price. (It is not irrelevant to point out that when the 1962 article appeared the market had already experienced a decline of major size, and was now getting ready for an even greater upswing. It was about as poor a time as possible for selling short.) In a more general sense, the later-used phrase “reckless investors” could be regarded as a laughable contradiction in terms—something like “spendthrift misers” - were this misuse of language not so mischievous.

The newspaper employed the word “investor” in these instances because, in the easy language of Wall Street, everyone who buys or sells a security has become an investor, regardless of what he buys, or for what purpose, or at what price, or whether for cash or on margin. Compare this with the attitude of the public toward common stocks in 1948, when over 90% of those queried expressed themselves as opposed to the purchase of common stocks.3 About half gave as their reason “not safe, a gamble,” and about half, the reason “not familiar with.”* It is indeed ironical (though not surprising) that common-stock purchases of all kinds were quite generally regarded as highly speculative or risky at a time when they were selling on a most attractive basis, and due soon to begin their greatest advance in history; conversely the very fact they had advanced to what were undoubtedly dangerous levels as judged by past experiencelater transformed them into “investments,” and the entire stock-buying public into “investors.”

The distinction between investment and speculation in common stocks has always been a useful one and its disappearance is a cause for concern. We have often said that Wall Street as an institution would be well advised to reinstate this distinction and to emphasize it in all its dealings with the public. Otherwise the stock exchanges may some day be blamed for heavy speculative losses, which those who suffered them had not been properly warned against. Ironically, once more, much of the recent financial embarrassment of some stock-exchange firms seems to have come from the inclusion of speculative common stocks in their own capital funds. We trust that the reader of this book will gain a reasonably clear idea of the risks that are inherent in common-stock commitments—risks which are inseparable from the opportunities of profit that they offer, and both of which must be allowed for in the investor’s calculations.

What we have just said indicates that there may no longer be such a thing as a simon-pure investment policy comprising representative common stocks—in the sense that one can always wait to buy them at a price that involves no risk of a market or “quotational” loss large enough to be disquieting. In most periods the investor must recognize the existence of a speculative factor in his common-stock holdings. It is his task to keep this component within minor limits, and to be prepared financially and psychologically for adverse results that may be of short or long duration.

Two paragraphs should be added about stock speculation per se, as distinguished from the speculative component now inherent in most representative common stocks. Outright speculation is neither illegal, immoral, nor (for most people) fattening to the pocketbook. More than that, some speculation is necessary and unavoidable, for in many common-stock situations there are substantial possibilities of both profit and loss, and the risks therein must be assumed by someone.* There is intelligent speculation as there is intelligent investing. But there are many ways in which speculation may be unintelligent. Of these the foremost are: (1) speculating when you think you are investing; (2) speculating seriously instead of as a pastime, when you lack proper knowledge and skill for it; and (3) risking more money in speculation than you can afford to lose.

In our conservative view every nonprofessional who operates on margin† should recognize that he is ipso facto speculating, and it is his broker’s duty so to advise him. And everyone who buys a so-called “hot” common-stock issue, or makes a purchase in any way similar thereto, is either speculating or gambling. Speculation is always fascinating, and it can be a lot of fun while you are ahead of the game. If you want to try your luck at it, put aside a portion— the smaller the better—of your capital in a separate fund for this purpose. Never add more money to this account just because the market has gone up and profits are rolling in. (That’s the time to think of taking money out of your speculative fund.) Never mingle your speculative and investment operations in the same account, nor in any part of your thinking.