Merging into The Golden Cosmic Egg 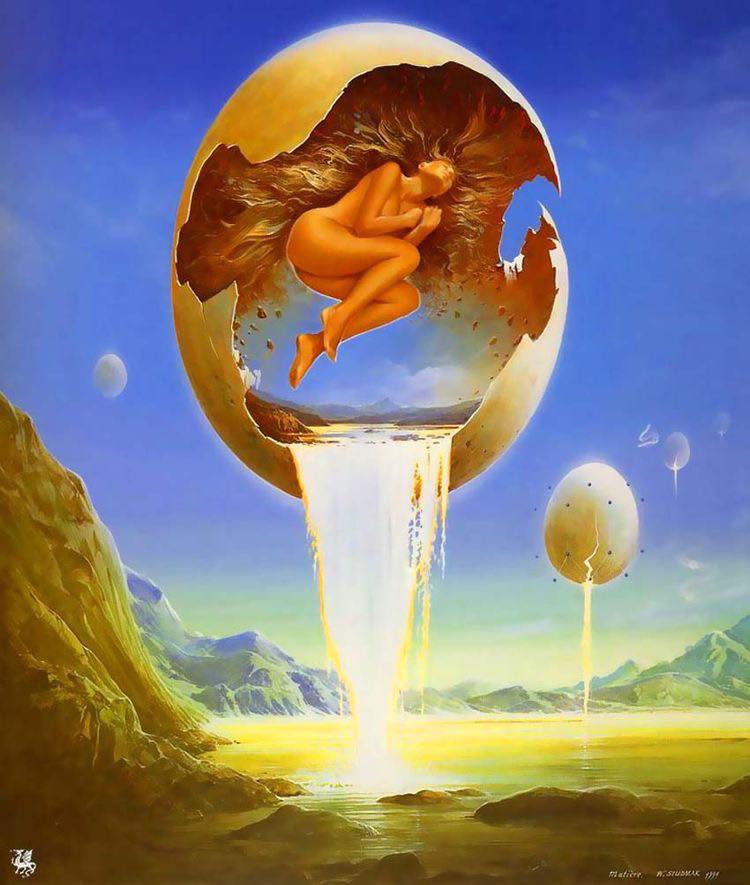 This morning I had a divine experience.

And I am blessed that I have many such experiences.

However this experience ranks up there and is one of the most powerful I have had.

I awoke in the morning and was told to go directly into meditation again.

I can see realms and energies.

I was laying on my bed meditating and a large cosmic golden egg descended upon me and enveloped me within it.

I am deeply thankful for this gift from the universe.

I have spent hours in meditation this last year as I wanted to reach new heights so that I could help this planet out more and I feel beyond thrilled that the divine is granting me my request.

I am still within this golden egg and the feelings are pleasant and supernatural in a lovely flowing way.

As it fills me with more light and cosmic energies.

Later after having this experience I was pulled out of my body and saw the demiurge.

I am very aware of this force and have encountered it before and I’m aware that it is a huge problem on this planet.

I was instructed that I should use the unconditional light waves from the cosmic egg eventually to channel that into this force and help create balance.

For darkness has no power in the face of love.

Says this about the cosmic egg

When we allow our ego/personality to be shattered and fully withdraw its control over us, we are released into our true spiritual nature. The human body is designed as a replica of the Universe, and we are asleep in the microcosmic egg until we wake up and begin to unite with the macrocosmic egg of the Universe. The human body is embedded in multiple dimensions of invisible worlds that make up our microcosmic egg or auric body shell. Our microcosmic egg enters conjunction with the macrocosmic egg when we spiritually awaken into the later parts of Monadic activation. It is during the Monadic spiritual initiation that the invisible worlds, incredibly, start to be made visible to that person. As the ego body is rejected and slayed, we begin to break through the layers of our auric shell into the Cosmic Egg. When this connection is made with our True Holy God Parents, we are blessed with their hierogamic union or sacred marriage, which births the Solar Egg and Golden Embryo within our aura.

When the Golden Embryo is seeded in the Solar Egg, the Lunar reflected light and its many shadow forms will start to gather into what’s called the Buddhic Egg. This is a spherical body repository for the accumulated Moon Chain Lineages and a variety of Lunar forms that have been a part of our Monadic family. Because in the lower creation realms, the Mother of God was experienced as a lunar force, this heralds the transfiguration of the Mother principle into the Solar feminine within. The Solar feminine aspect of the Mother of God in her Christos body is her daughter, Sophia.

Indigenous cultures have known the sophianic consciousness represented as the Solar Feminine by other names as well, such as Saint Brigid, who is the Fire Goddess of Ireland. In Celtic polytheism and Irish mythology, , Brigid (exalted one) is the daughter of the Dagda and one of the Tuatha Dé Danann. As is often the case with Celtic deities who are described as threefold, she is seen as three sisters, all named Brigid, who perform various functions in society, such as healing, poetry and metal working. Brigid Day marks the beginning of spring, most commonly it is held on 1st of February, or about halfway between the winter solstice and the spring equinox.

When we are birthing the Golden Child in our lower energy centers, the Solar Fire consumes our shadow parts existing in the Buddhic Egg. These shadow parts contain negative forms, false ego identities and their memories, which exist within the root, sacral and solar plexus. The entire core structure of our body and our previous ego identity may feel like it is being decimated by a wrecking ball. During the current stage of the Galactic Law of Alchemy transmission (Capricorn, principles of fermentation to multiplication), the destruction of the old internal structure is especially potent. The etheric cords, magnetic structures, imprints and mind control machinery from the lunar forces are being severed from manipulating the lower chakras.

The Mother’s female principle and instinctual-emotional body within us must be reconfigured and filled with the radiant light of the Solar Fire. The main energy centers impacted by these levels of mind control transmission are the ego/personality centers, the 1st, 2nd and 3rd chakras. So as these levels of lunar cords are cleared, or consumed in the transfiguration flame, this shifts the entire platform of our core identity. The purpose is to discern what it is, to call it out and know it as the Imposter Spirit, and to know the difference between the Eternal Light of God and the Forces of Darkness and Shadow. During this phase of transfiguration, many of us will face the inner demons of despair, the demons of addiction, fear and agony. Some of us will face these same demons on the earth plane, and provide deliverance for these creations to be released from their bindings and returned to the heart of Holy Mother.

Through the transmogrification of the Dark Mother’s lunar forces being amalgamated into the Solar Fire, (through the unification with the Cosmic Egg), the previous consciousness intelligence of the Universe activates consciousness memory from before the separation. The Cosmic Egg holds the record of the original times of creation before the “fall of humankind” into material incarnation. When we break through the Cosmic Egg, we experience the unification of all creation before the separation that occurred from the wall in time. The fall is the forgetfulness of humanities divine spiritual nature, forgetting our direct relationship to the Universe, the planet and our interconnection with all of life.

Visualize your aura as a cosmic egg, and see a blue line around its entire outer edge. There are no holes or indentations in your aura. Feel the aura pump up with powerful, etheric light. This energy is a force field that is trans dimensional, or above this dimension. Now open your crown chakra. Visualize a long etheric tube attached to your crown chakra. The tube goes up to the fifth dimension and to our star ship Athena. I, Juliano, am pumping this special harmonic light down into your aura. Perhaps you can even visualize a hand pump on a basketball. You can see the pump. It is pumping in air, and the basketball is filling up. In the same way, I am pumping into your aura a special healing energy light that transcends and heals any blockages, any pathogens, any attachments, and any irregular, abnormal cellular structures in your third-dimensional body. The energy is now being pumped into your aura.