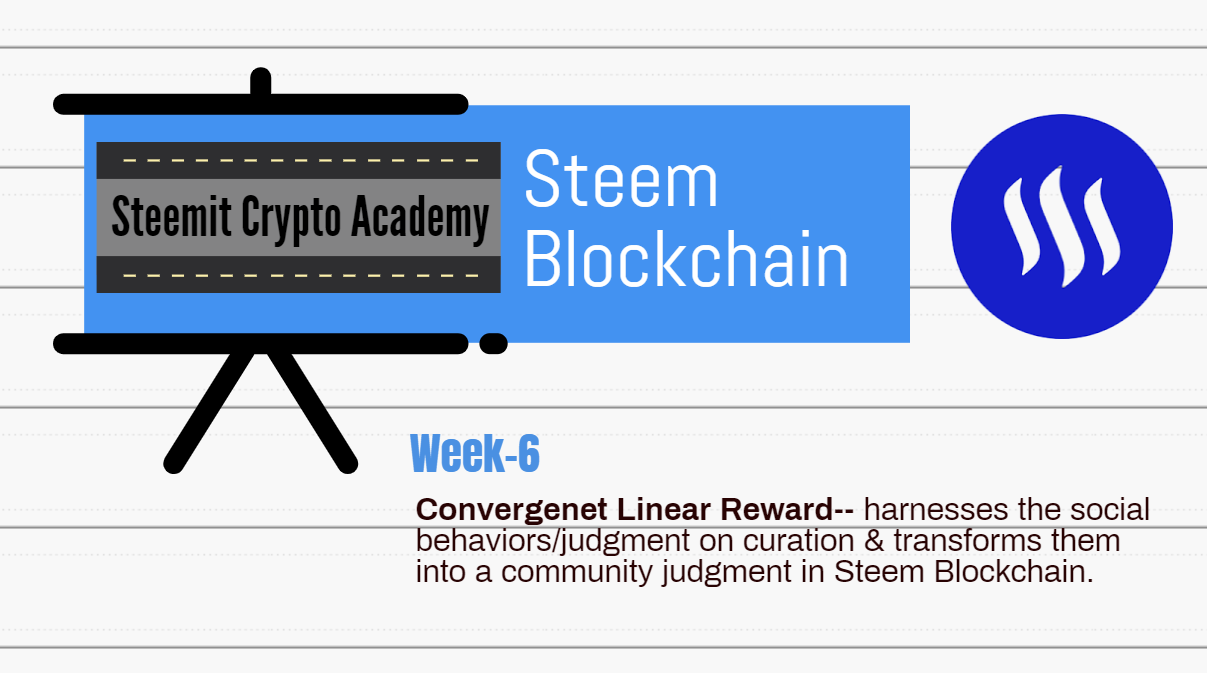 possible to train them on case to case basis with code/algorithm. But the social characteristics of the community are a lot easier to train, particularly in creating a social network, added with economic advantage.

That's what today's topic is-- Convergenet Linear Reward-- harnesses the social behaviors/judgment on curation & transforms them into a community judgment in Steem Blockchain.

It was the year 2016 when we witnessed the first-ever decentralized social platform Steemit on the top of Steem Blockchain, at that time the reward curve on Steem Blockchain was quadratic/superlinear, with its function f(x)= x2. It really encouraged people to invest more in STEEM and then power it up as Steem Power(SP), as more SP you have, the more reward you can generate. But later it was found that it discouraged the common middle class and the Newcomers. Also, it led to-- "The rich get richer".

In the year 2017(June' 2017), the reward curve(quadratic equation) was replaced by a linear equation, f(x)=x. This really looked fair for all, in line with the spirit of decentralization & equal opportunities for all. But even if it looked fair to all, it led to a number of parallel posts, with no social intersection, people started self upvoting, so it was found that the social behavior tends to be selfish with a linear equation. Further, it also led to sheer abuse of reward pool by using bot upvote for poor content and pushing it to the top, which led to poor content discovery.

In the year 2019(Aug' 2019/ Hard Fork 21), to address the selfish behaviors, bot use, abuse of reward pool & to improve the content discovery, the reward curve(linear equation) was replaced by a convergent linear equation, f(x)= x2/(x+1). With this equation, self-upvote is discouraging in the context of monetary rewards, and you can gain more by upvoting other's posts. Further, the number of parallel posts got reduced with the introduction of convergent linear reward and it led to a better social intersection, hence better content discovery.

Those who find these math equations as tricky and complex, don't worry I will make it as simple as possible so that it becomes an easy cup of tea for all.

In the 0 Layer,(at the Blockchain level), it does not recognize SP, rather it is Vests. They are like shares and the reward that is generated is known as Reward Shares. So when you upvote a post, it generates "rShares". The reward(STEEM) is then distributed based on the rShares generated in a post.

So we have two parameters--

The beauty of convergent linear reward is that every time a new user visits and curates the post, the STEEM reward per rShares increases. So more the people approve content, the more is the reward it generates and becomes a trending post, visible to all.

Further, as more and more rShares added to a post, it converges to linearity, which we will check by taking the real example(using SP and its upvote value)

Please don't get confused by rShares, Vests. I will simplify it by plotting a curve using "SP and upvote value". (At the Blockchain level, they are known as Vests(SP) and rShares(Upvote Value)). 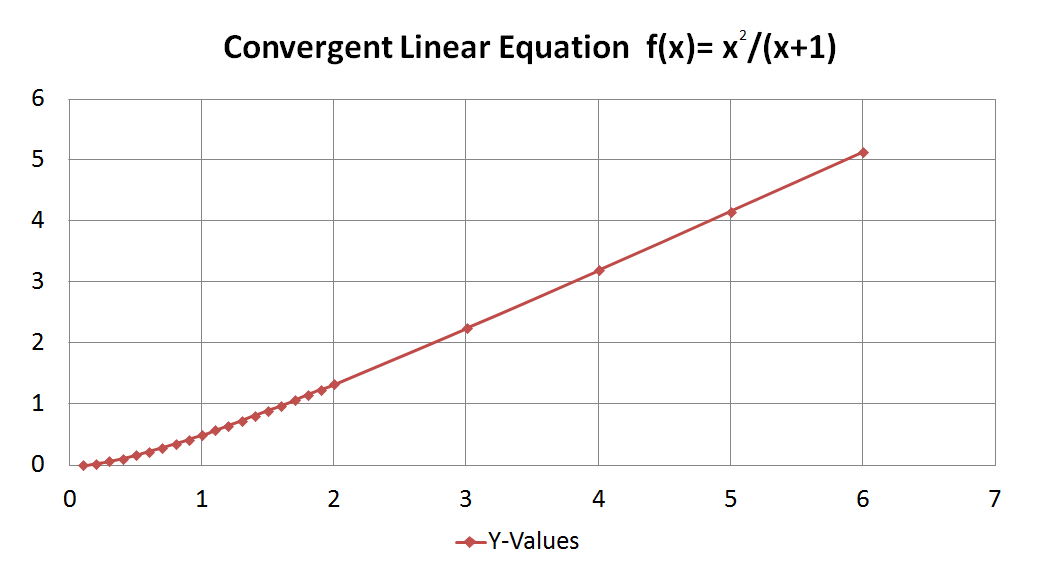 Now let's get back to the real use of this equation in Steem Blockchain.

We have the input as (SP, VP) using which we upvote a post when we do so it generates rShares, and based on that rShares the reward pool is distributed.

We will take a range of different input values (in increasing order) to check the output and then we will establish how and when it converges to linearity, what is the significance of this curve on the social behaviors & judgment(curation).

Let's plot the chart of these values. 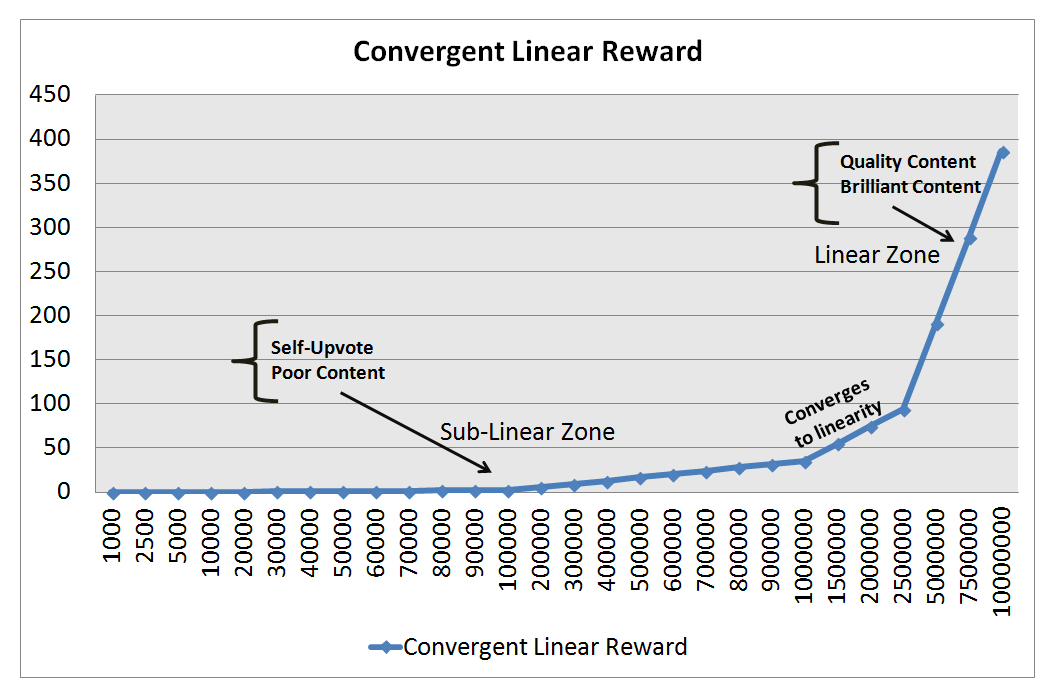 Hence all three curators will earn better curation rewards if they reach an agreement as a community in their judgment on curation. 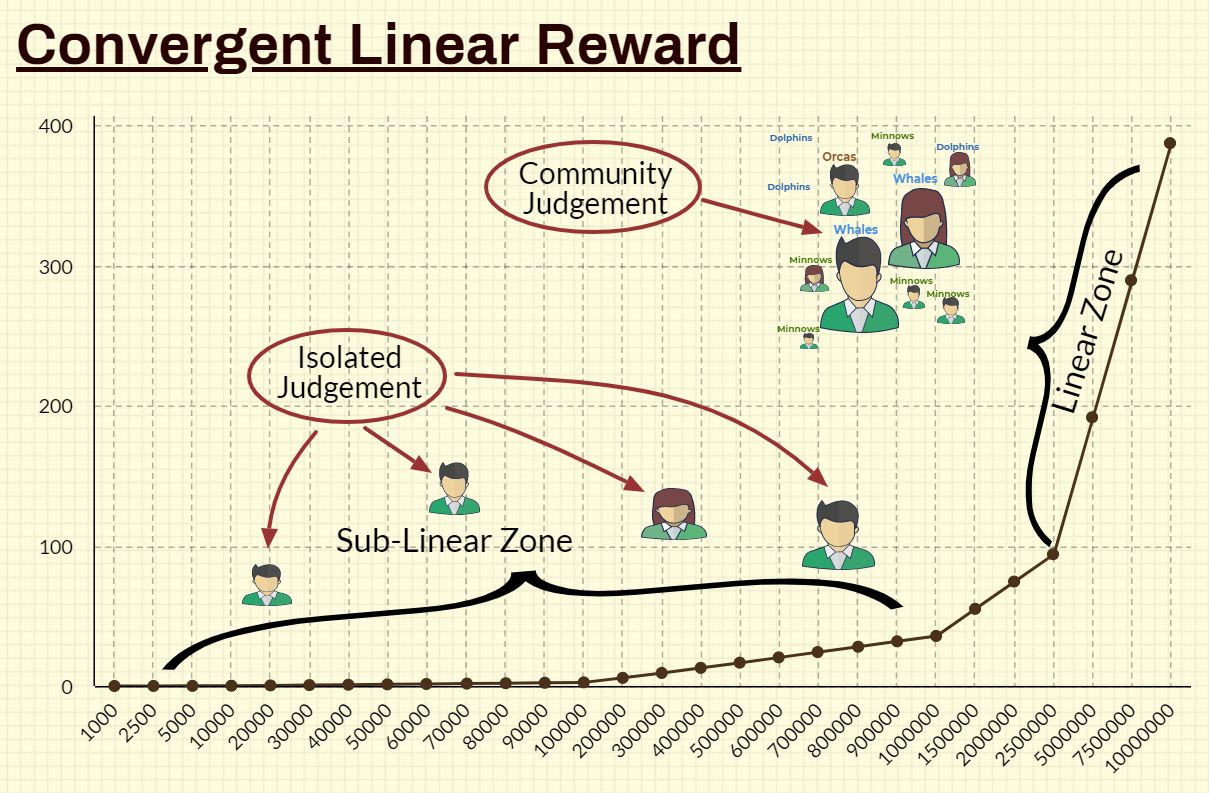 Put simply, convergent linear reward curve encourages a curator to reach an agreement with the community in Proof-of-Brain. Further, isolated judgment rewards less, hence the individual curators are motivated to visit other's post and find quality content, in the quest of quality content lso help to better conte content discovery, because the individual curators can reach an agreement with the community only on quality content/popular content which adds value to Steem Blockchain and its ecosystem.

Dear professor @sapwood, my week 5 task post has not been review sir. I hope you review it sooner. Thanks.

This is the link to the task;
https://goldvoice.club/steem/@temitopef/homework-task-5-steem-blockchain-pob-voting-window-curation-or-lesson-by-sapwood

I will check it soon. Don't worry.

Respected Professor @sapwood, here is week 5 homework post. Please review it. I hope you will review it asap. Thanks

All are being checked serially. Don't worry. It will be curated soon.

All are being checked in serially.

Dear sir @sapwood my homework for week 5 has is also waiting for your review ....
Hopefully you will check it ASAP. . Thanks .

Will visit you soon.

Please use the tag #sapwood-week5 and it has to be the one among the first 5 tags.

If you have done that then I will surely visit your post. I am curating now in the chronological sequence.

my home for last week is not chacked sir

It is being checked now serially. Don't worry. I will find your content soon.

thanks sir you are the best and the coolest teacher ever

You can if you want to.

Hello sir can i also start doing these homework ? I am new on this platform and my achievement 1 is not verified till now?

Hello sir can i also start doing these homework ?

Thankyou so much for responding 🙂

THANK YOU SO MUCH FOR THIS! I can't tell you how many people/accounts I have asked for the formulas used to calculate the upvote values. It was as if no one knew. I haven't really delved into this yet, but I know I will tomorrow. This is amazing!!!!

This is my submission

Your article is informative @sapwood sir. You are legendary in your teachings. I am enjoying every bit of it. I hope to become a graduate of crypto currency in the varsity of steemit blog and under your tutelage and other professors and able coachings of the founders, Admin and host of other steem heads.

maykit55
My homework this week for Professor @sapwood

maykit55
Here is my previous assignment that has not been corrected

Ho professor@sapwood, this is my entry for week-6 homework task. Kindly help review.
Thanks

Thank you Professor @sapwood for the class

This is the link to my homework Task
https://steempeak.com/hive-108451/@dprogress/steemit-crypto-academy-task-6-by-professor-sapwood-or-convergent-linear-reward-homework

Dear professor @sapwood, your lecture was a great one as always. Thanks for opening our sights to knowing more about the Steem blockchain.

This is the link to my Task 6 solution;

Hello professor, thank you very much for this great lecture, here I share with you my homework. Greetings!

Hi @sapwood Here is my submission

Hello dear sir @sapwood , Here is my submission of home work task for week 6. Please check it out as soon as possible so that I could get reward of my efforts.

maykit55
Dear professor @sapwood a pleasure to greet you, I have a question is that my last two assignments have not been corrected by you and they are about to be due

And the tags must be among the first five tags.

I would request you to edit your tags and include the relevant tags in the first five tags. I will definitely find you.

Thank you teacher @sapwood, the correction has already been made, waiting for you to review my homework thank you.

Please professor @sapwood can you take a screenshot to show me from where I can calculate the upvote value in steemworld.org

here is my homework fr week 6 thanks for teaching

Hello, dear teacher, here is my assignment 6 for review, thank you for your class.

It's really a nice lecture by professor @sapwood. Here is my homework post for #week-6

Hi! Professor, thanks for the class.
Here is the submission of my homework task below

Greetings Prof. @sapwood this is the submission of my post
https://goldvoice.club/steem/@davchi/steemit-crypto-academy-steem-blockchain-convergent-linear-reward-week-6-or-homework-done-by-davchi

Respected Professor, here is my submission for week 6. I have tried my best but errors are expected. Please let me know to rectify these errors. Please review it as soon as you possibly can. Thanks

https://goldvoice.club/steem/@akmalshakir/cryptoacademy-homework-task-6-for-sir-sapwood. Sir @sapwood check my post if you are free.

Hi @sapwood This is my homework task for week 6
https://goldvoice.club/steem/@amjadsharif/crypto-academy-week-6-homework-post-for-sapwood

Fantastic information and i'm a lot clearer about how the rewards works. Will get cracking on the subsequent projects and assignments.