Busted by my landlord smudging his house with white sage! 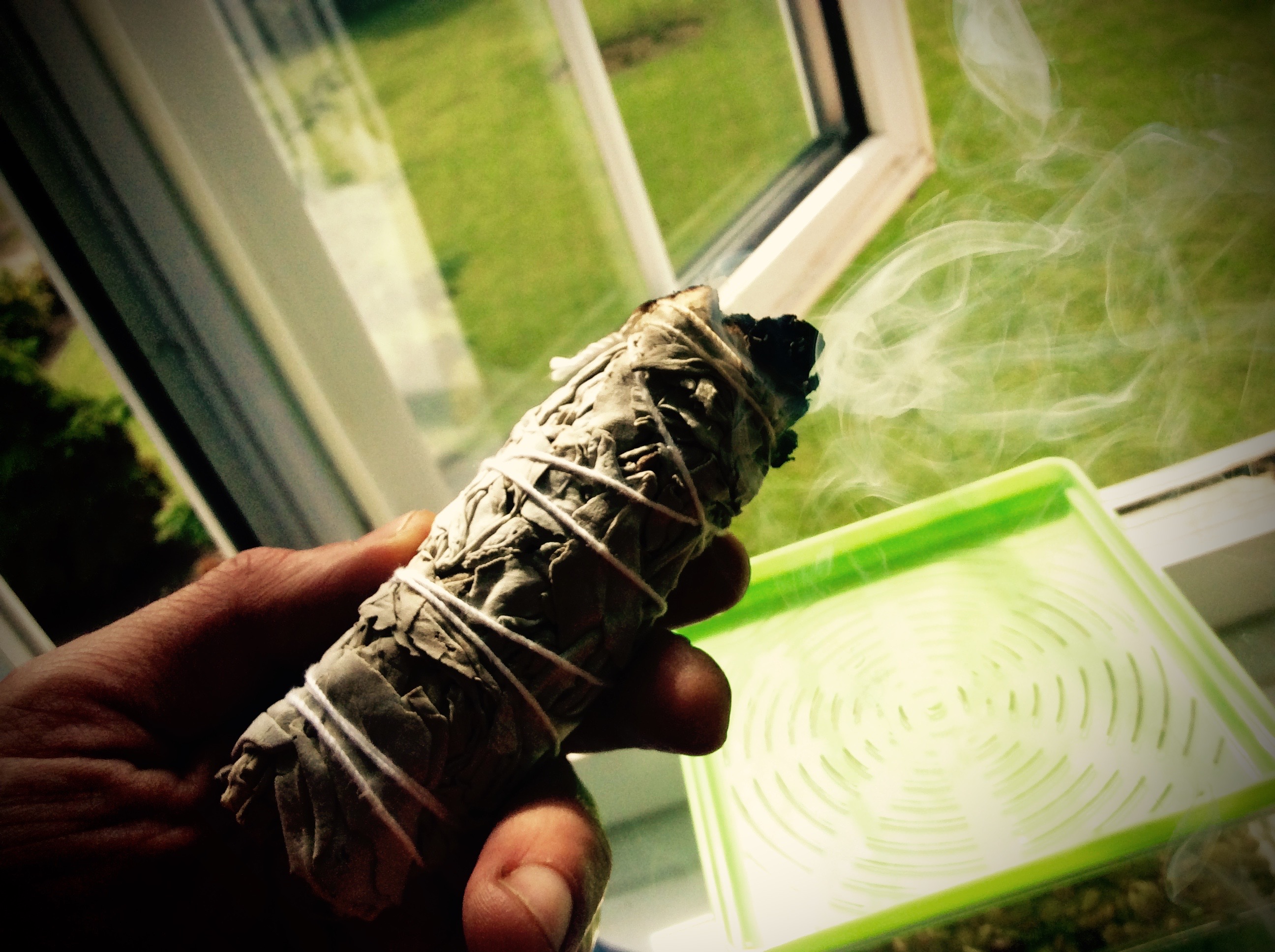 I had been waiting for the perfect moment since arriving here a month ago. There are four guys living in this horse farm and it is rare that I am alone all day. On Sunday the landlord (who already thinks I am a bit strange coz I don't wear shoes) said he was going to the beach (50 miles away) with the other lads. This offered me the perfect moment for smudging with my organic white sage to cleanse the energy in and around his home.

I had been feeling a cold kind of energy particularly in my bedroom and have been sleeping badly since arriving so was looking forward to this very much.

The smoke was thick and the intention was clear. The two quartz crystals I have with me were working alongside me, enhancing the intention.

I did his garden, the greenhouse and even the stables before going into the house. The horses seemed fine about it.

No more than an hour after leaving, he pulls back into the drive. I had finished smudging by then and all the windows were wide open to clean out the smell, but it was still quite intense.

He seemed angry like there had been an argument in the car which had led to turning around and coming home. And he was not at all impressed with me.

I tried to explain and showed him the sage, just so he didn't think I'd been smoking weed in his house! But he clearly didn't understand.

He said nothing more, closed all the windows, grabbed the 'alpine fresh' toilet spray and proceeded to fill up his house with what can only be described as chemicals.

No matter. I didn't take it personally. Just happy the job is done.

And you know what?

I slept like a baby last night, dreaming of smokey waves of energy... releasing the dark to the light.

This house is clean 🙏🏻

Where did I buy my smudging kit?

Living in the middle of nowhere Amazon has been very helpful.

Even the three plants on my windowsill are compliments of Amazon.

So, this is what I bought

I liked the fact it had a natural holder in the form of a luminescent shell. It's basically a funky ash tray!

I hadn't heard of palo santo before so had to look it up.

I've not used any yet. Just the white sage.

Lemons are a great way to detect negative energy.

He was a London based filmmaker until he sold everything and set out on a barefoot journey around the world, currently based in the south of France.
He is travelling with his partner & two children and with no bank account he has been living on STEEM & crypto for over two years.

Sam supports @naturalmedicine because they are seeking to help us in ways which go far beyond money. Please come and join us on Discord

Haha! That sure is a fun story, thanks for sharing! Glad you’re sleeping better. By the way, if you’re curious how I woke up this morning check the text underneath today’s vlog post I did :>)

Well you know I'm gonna have to now...

Seems weird talking to you on Steem!

Hahaha! Yeah, I got notified of that. No hard feelings ;>)

I am way more active on Steemit than on Whaleshares, so you better get used of it haha!

Hey you deserve an upvote, doing the right thing there, walking barefoot, smudging and living off steem, great to meet you here Sam.

Great to meet you too & thanks for the vote brother! This is just a small part of my life as I am in the UK for the summer shooting a film.

I have re-claimed the greenhouse in my rented accommodation for tomatoes but the real work is going on back home in the Pyrenees, educating the kids and learning the land. Once crypto goes to the moon we will be building an eco community somewhere in the mountains. Have learned a lot since I hit the road five years ago.

Happy to be more active with the @naturalmedicine group now. That is where I spotted you ;)

Hey amazing to hear you want to build an eco community, I will come spend time with you there when the profits come in as you say. The political situation in my country is uncertain and I might have to relocate if it gets worse, and an eco community is the way to go. Let me know where you are thinking of locating yourself.

Lovely post, Sam. Getting the energy clear can be done in soooo many ways. Loads of alternatives to sage - things like artemesia (mugwort) are wonderful too. I prefer to make my own smudge sticks these days mixing sage from the Thai Royal Project with my own organic artemesia. In the end it is mostly about INTENTION though. It's enough often to open all the windows and VIBE the space clean with your own Positve Mental Vibes and some great music. Whatever works. :)

I feel ya. The intention was super clear and strong.

We picked a bunch of sage growing near our home in France and did our house shortly after moving in, and would have liked to have used that same sage. Felt more effective picking it ourselves. Still, amazon seems to do the trick these days (now that I have money!) and it unexpectedly introduced me to palo santo sticks which have a beautiful aroma. Not to be enjoyed while landlord is in ;)

Shame you're not on Whaleshares. My sister joined today. I think you would get on... and you may even perhaps have some answers for her, relating to chronic insomnia?