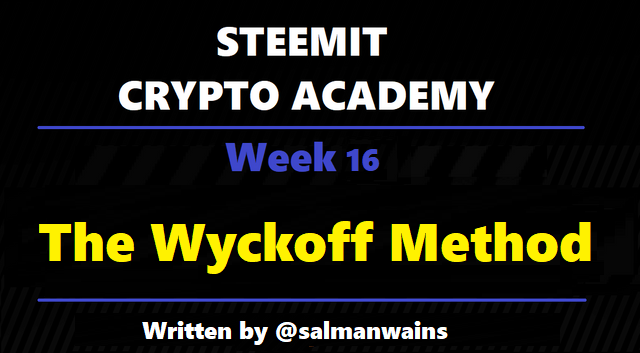 Wyckoff used a term known as Composite man. It is his figment of imagination that he used to refer to the market. According to him to thrive in the market it should be taken as if, the market is being controlled by some single entity.

According to him, the Composite man referred to some big short of the trading market. Who manipulated the market in a way that always suited them in one way or another. If you are a composite man you will earn money while other small-time investors are losing money. Using the concept you can identify the trend cycles in the market. there are 4 phases to the cycle a composite man performs

In this phase, the composite man performs a  holding on or gathering of the asset. This gathering or accumulation of assets is done over time in such a manner that price is not affected greatly.

After the accumulation process, When a composite man has enough assets in his holding that he is able to disturb the balance of supply and demand, they start to push the market up. Of course, emerging trends are attracting more and more investors, leading to increased demand. and with the increase in the demand, the prices of the asset also increase and the composite man makes a profit.

Now comes the distribution phase. The Composite Man starts to sell his holding to the market to the people, who are interested in buying at that point. Selling his holdings allows the composite man to achieve two goals. First, he can sell his holdings at a profit, and second, he is able to balance the ratio of supply and demand in the market.

After distribution, the Composite man is selling his holding in large amounts because he is making a profit. This selling in huge volumes is the cause and effect is that the trend starts to reverse as the supply is overflowing and demand is low the price starts to go down.

There are 3 fundamental laws, that are observed in a trading market or a market of any kind they are known as

The Law of Supply and Demand

This is the most fundamental law of any market. According to this law the price of any commodity or asset increases when the demand is high and the supply of that asset or commodity is low and the price goes in the other direction i.e. decreases if the supply is high and demand is low.

The law of Cause and Effect

According to Wyckoff, nothing in the market happens at random; everything happens on a cause and effect basis. Wyckoff explained it as such accumulation is a cause and markup is the effect just like distribution is the cause and the markdown is its effect.

The law of Effort Vs Result

The following chart is a price chart of LTC/USD which clearly shows the 4 phases of the market cycle. The first highlighted area is the accumulation phase in which the composite man is either holding or gathering more assets to hold. You can see subtle changes in price but nothing drastic.

Then the first black line shows the change in trend and the next phase, the phase of uptrend has started. This is due to the fact that the supply is short and demand is high due to which price is going up.

After an uptrend,  the volume has increased again but the price has reached resistance so it doesn’t go up any more. This phase is known as distribution. The Composite man starts selling.

In the last phase, you can see it labeled by the second black line on the graph is known as the down trend. It is due to the fact that the composite man sold his holdings in large amounts changing the balance of supply and demand. Demand is low at this point while supply is high so the price goes down

Wyckoff's deep analysis of composite man and the 4 phases of the market cycle. Can go a long way in helping to understand how the market works and how some people with power manipulate the market for their benefit. The 3 fundamental rules of the market also give valuable insight into the working of the market.

Thank you for being part of my lecture and completing the task!

My comments:
Your work is ok, but there are some concepts that were not developed correctly (as composite man) and your answers could have been a bit more detailed.
The chart is missing the volume bars and that's one of the most important things of this method.