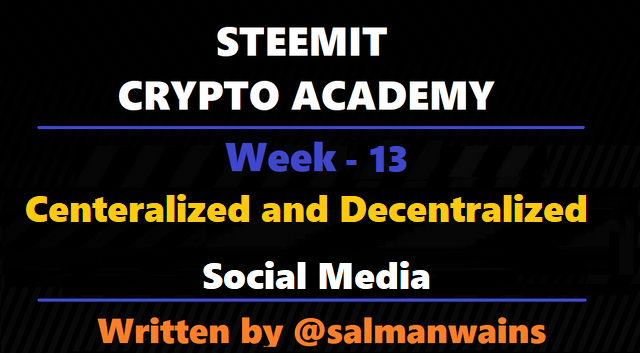 Write the definition of Decentralized and Centralized Social Media Platforms in your own words.

In simple words, This type of platform is open for all users and has no obligations regarding any aspect. The developers don’t interfere with the accounts on the platform and are given unrestricted access to do anything.

Decentralized networks are becoming popular because individuals can run them on their own terms without any oversight. They give users freedom and autonomy to decide how their network behaves.

In simple words, This type of platform is under authority with the hold and is in charge of every action on the platform and its account.

The centralized platforms do not give complete freedom to their customers to run their business or even their ideas. Their views may get banned if they do not follow the rules and regulations of the website and the platforms. In contrast, on the other hand, compared to the decentralized system, it provides complete freedom and privilege for their customers to enjoy the forum without any obligations and restrictions and even without the fear of their account being blocked by the developers.

To add to that Centralized system restricts its customers to work freely, bounding them under the rules and regulation when they are working as a professional or their account is titled under the heading of trade or any profession; hence following the rules and commands of the authority is compulsory whereas in contrast to the decentralized system there are no such restrictions as people have absolute right to work or run a business in whatever way they want. Furthermore, you have complete authority to start any business and get your voice heard over the world with no restrictions.

In contrast, measures of the decentralized system include Hive.blog, steemit, Dtube, and many more people have the right to work with complete authority and freedom.

In my opinion, a Decentralized system is the best way for the future as it does not restrict the people from any rules and regulations and provides a larger area and scope for them to work out their business and plans, which help them to implement a wide range of ideas and techniques.

When it comes to centralized social media, the biggest issue that we face is the privacy breach. Privacy is one of the basic rights of any human being's life but with these centralized social media, they are keeping and accumulating our data on their servers and nobody knows how secure those servers are. The targeted ads we see while browsing Facebook is one example of the privacy breach. Another example, is also from Facebook , we all know about the recent scandal of personal information of voters being used to set up the US general election where Donald Trump came out victorious. The data was allegedly provided by the Facebook and due to this fact, the campaign of hashtag deleteFacebook came into existence.

How steemit decentralization social media is best than Twitter and Facebook.(answer must be written in own words)

There are lot of reasons to show that how Steemit is better than other centralized Social media platforms like Facebook and Twitter. First of all, People can earn massive income from Steemit just by posting quality content and If the content liked or upvoted by other steemians then we get handsome reward on our post. On the other hand, Facebook and Twitter doesn't provide us this facility to earn money on likes we get on our posts.

So these are the basic reasons that Steemit Decentralized Social Media Platform is better than Twitter and Facebook.

What do you say? How do Steemit social media change the lives of millions of its users?(answer must be written in own words)

Steemit social media has change the million people's life in many ways.

Like if I talk about my country Pakistan then many people in this COVID-19 Pendamic lost their jobs and they were in their home. Some of our senior member of Steemit Pakistan did some online steemit promotion and those users joined Steemit and now making a handsome money.

Moreover, I have seen that There are some charities over here on Steemit and One example of this charity is @pak-charity managed by @steemit-pak. I am also regularly donating my earning from steemit to this charity account. This charity goes out every month to help the poors. There are many other charity programs I have seen on Steemit.

Furthermore, Many people are now able to earn passive income. They introduced Steemit in their family and almost every of their family member is on Steemit. I know many of them and our Pakistan's newly appointed first female Country representative @vvarishayy is an example. I have seen that her Mother, brother, Khala, cousin many more joined Steemit and earning handsome income which changed their lives.

So this is the way, Steemit has changed the lives of millions of people all over the world.

How can we make money with Steemit's decentralized social media.(write your own experience)

Still Writing.....Posted due to short time in deadlineWe can make money from Steemit through different ways, I have mentioned some of them below.

We can make money by posting quality content on our blog or in any community. You get support from fellow steemians if they liked your content. Moreover, Steemit team also visit active communities regularly. So, if you are active and posting regularly then you can make huge money from Steemit Decentralized Social Media Platform.

There are some users or community accounts over here those ask you to delegate your SP to them. They upvote the quality content to earn maximum curation rewards and then sends a portion or some percentage of that curation to every delegator in the form of Steem.

4) By Taking Part in Contests

5) By Posting in Steemit Crypto Academy

Steemit Team has introduced an Academy on Steemit for Crypto Courses. The team is supporting each and every member who do well in the Homework tasks. The Steemit Crypto Academy is now in season 2 Week 5 and they have total of 11 Professors from different countries to give lecture to Steemit Crypto Academy Students as well as to mark their Homework tasks. If a users get's marks more than 5 then Steemit team do upvote those users posts with steemcurator02 which is of a huge value.

So, These are some of the methods by which we can make good money on Steemit.

How to create comm

Still Writing and taking screenshots.....Posted due to short time in deadline.We can create our own communities on Steemit with simple steps. ty.

So, here is teem in our account which is the fee to create Steemit

1) Open Steemit and after logging in, Click on "Explore Communities"

3) Enter Title of the Community and write some description as well and then Click "Next" as seen in the below screenshot.

4) After clicking Next, a key will be shown. Remember to save that key and then click "Create Community" as mentioned below.

5) When we click on Create Community, then a pop up message will appear to ask for confirmation and 3 Steem as a fee.

So, After clicking on "OK" to confirm, you will be asked to enter your active key to pay 3 steem and the community will be created after paying.

I was not willing to create a new community. That's why I clicked on Cancel and didn't pay 3 Steem because this was only a Homework task and now I know that How to create a Community on Steemit.