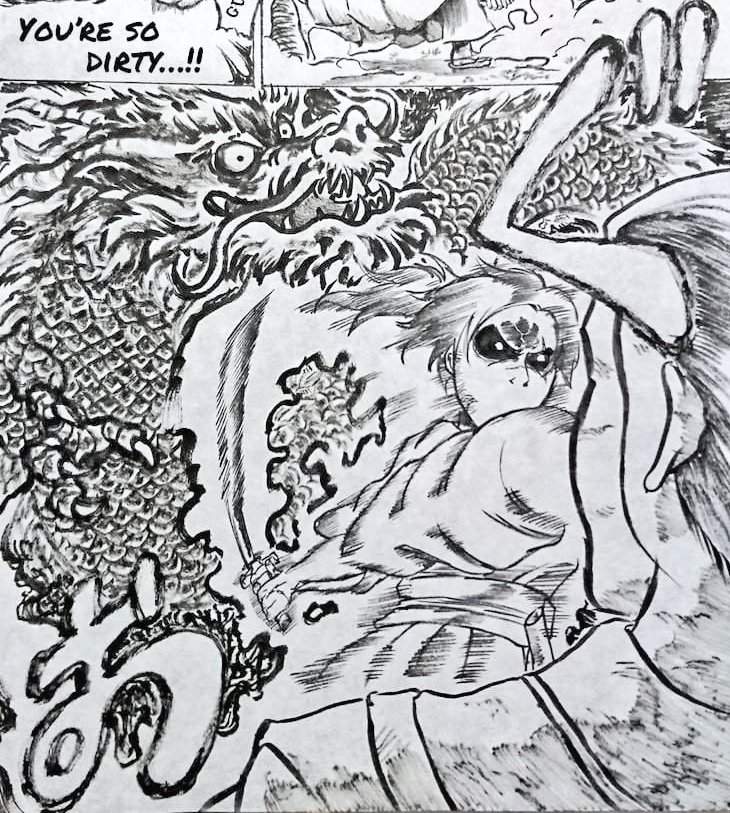 Hello steemians!
I am RYO!

And I found some problems with past work so edited them.
And the name of some character has also changed, but the main character has not changed.

About hints to read manga before

Mr. Kaneyama
It is an example Katana
Oh…
Finally…!

You have a message from Kaneyama

"Sā-Sā(さぁさぁ)=※Words to welcome and invite people" step and right up!
It's an insect～! bell cricket!
Sā-Sā Come one! Come all!
It's a beautiful sounds! insect only for the current season!

Beautiful ladies there! Do you want buy it?

So…Do you buy one case?

Wow…It seems that a famous Katana has been found…

It's more than it being unusual,
this is the Shirasu toyokazu's "Meitou(名刀)=※Excellent Katana"

Shirasu toyokazu…Oh, he is master of Katana making, right?

…Sure, It seems that the first Katana made by Shirasu was found…
It has been lost for a long time…

Really? So…it was good
…Maybe it's not so good…
Because it’s probably Kane yama who found the Katana

Kaneyama! That guy of the new government? That guy's story is all bad story…

Moreover, it seems that guy sell it to foreigners a lot

New government's guys sell Japanese treasure one after another to foreigners...

Not only that! Nature and fields are messed up by their urban development!

Yeah! They say they are Restoration, but only destruction work and dirty money making! I can not forgive them!

Hey! we should raise more voices!
If we stay like this our life will be painful…Complain to politicians!

Hou…It's a audacious
Trying to strike the new government...
But I do not think that it is wise judgment…

"Yabai(ヤバい)=※Dangerous"…They are the new government's guys…!
Aa…well…I got on a little bit cocky...
Of course I do not feel like doing that…

What's wrong? You do not have the momentum of the moment ago, Mr. Rebel…
Recently I heard that the number of rebellious people is increasing, I came to this place and it was right decision

No No! I'm not Rebel! I am…look! "Mushiya!(虫屋)=※A parson who sells insects"
Just selling this bell cricket!

bell cricket… I see, Is your job a Mushiya?

Well, I have to introduce my job as well…

Remember you
Every noisy bugs will never… escape!!!

…who the hell are you?

Who the hell are you?
You…What is that eyes…!
This guy…Don't move…!
Kukkukku…rebellious people and a samurai…We came to this town and were a correct answer…
"Oi!(おい)=※Hey"
You guys, Play with this Mr.samurai

Dammit! I have to help him!

wait! They are not opponents we can resist!
The other day, I heard that a samurai of a certain village was torn down…And it seems that the whole village was baked…
Probably they are doing…Perhaps they are masters hired during the rise up of a new government…
I am sorry but...We are helpless…

Well…
Apparently, your countryman?
it seems you did not know we were new government…
I will admit that justice but ignorance is empty…
what will you do? You can escape if you want to run away…
But Instead…
Villagers are sacrificed

The word of the soul's rotten person is poison…I do not feel like listening to your Idiotic speech any more
Apologize to the villagers, And Go away!

finally you talked…Apologize!?
You seem to be like a "Hanshu(藩主)=※Village leader" of the past!
Do you still play a samurai of justice?
Apparently I have to let you understand…The days of old samurai like you are over
From now on, our new government will change this country
So Age changes…
in the name of New Meiji government!!

Ah…! Sorry
This samurai seems to be much more skilled than I thought…
Can you win the 2 of us?

Do you still do it?

Next is my turn!!

I am sorry…Now we also…

Try not to move anymore,
I will fight alone

Do not let me say over and over!
You guys out of hand.
And…I have a personal fate to this guy.
Your "Waza(技)=※technique" showed me…
They are also receiving gifted education in foreign countries from early childhood…So to be honest I am surprised by your skills…However…

I am different level from them…!!

"Oi(おい)=※Hey" Is he okay?
Ah…Unfortunately, We are three mans fighting, but this situation…

Good…! To Avoiding my "Hitofuri(一振り)=※1 swing. in this case the meaning of attack"
But…My Attacks are still going on!!!

What's wrong!?
Only running away will not win!!

That technique you are using from a while ago…
Is that Ueshiba "Ryu(流)?=※style"

Ffuffuffu…I know.
It's a nostalgic style…But for me it's not a good memory

…Do you know him?

Yeah, I told you a while ago…This is the "fate"
My father lost to Ueshiba…And lost both "Chii(地位)=※status" and "Meiyo(名誉)=※honor"

Old days, there was a meeting in the military…on which "Bujutsu(武術)=※Japanese martial arts" to use when it comes to war with other countries.
It became a "Kumite(組手)=※Practice game" formula to judge a better Bujutsu…
Those in the military focused on the skills and style of the master…
My father's opponent was Ueshiba.
And my father lost to him…
A Bujutsu that uses opponent's power to defeat opponents as it flows…
The Bujutsu to show the difference in power without robbing a person's life is beautiful, his technique was blessed like a kind of art…
And on the contrary My father who lost the Kumite lost everything…with the position, honor, and…Samurai's pride…
Do you understand?
I fulfill the honor my father could not fulfill

I will become a part of the new Meiji government…and change this country from scratch!
Economic power and military force not to be defeated to any country, and gain overwhelming power!
Do you also want to see as a person aiming for "strength"?
That moment when Japan dominates the world...The new Meiji Government will accomplish that...!
Ueshiba beat down my father and crushed
But I will not forsake you ....
"Douda?=※How about?" I will recommend you…
That power should be used to build a new "Teikoku(帝国)=※empire" ...

…What did you do to villagers for ambition?

Revolution requires purification and law reform…
In order to line up in a powerful country, Unification of citizens is necessary…
We can not let the rebels be forgiven

I see…In order to strengthen this country you guys will repress people with violence And vanishing the village…Is that your justice? If so…

I am not at all interested in such "justice"

Ah…That samurai's This is the end

Then you are no more use…
a while ago, It is good as a samurai mind that you do not use Katanas easily…but…
I will slash you more and more without reserve!

If you defeated me, will you continue villager's purging again after that?

Of course.
Especially not only those cheeky villagers,
If there are other villagers against us, all the villagers will take "responsibility"

"Yaharina=※As I thought"…
I do not like useless battles...especially the battle against guys like "Those who like useless conflict"…
However, that my something action made the situation worse…it is also fact.
I can not let the villagers any further inconvenience…
Then…this "Sekinin(責任)=※responsibility" must be fulfilled…!!

Fu…Anyway, I will not let you escape
Ueshiba style's samurai…!

Let me see it again ... Ueshiba style's technique…
And I…crush it!!!

"Miro!(見ろ)=※Look!" villagers!!
What happens to those who opposed us!
Such a samurai are powerlessness in his...

If you feel a difference in ability, go away right now, And promised not to add harm the villagers anymore ...
If you do not like it I will keep on "this"

what happened…!?
His attack should have been predictable…
When I noticed I was being thrown…?
Did I not see any of his attacks?
No! Be calm…!His Ueshiba style is mainly counter type ...
Decrease my attacking motion and the moment he attacks me…slash his arm!
First, let a this guy avoid my attack! after that…

What's!? cut off my move before attacking yet…
This guy…Too fast…!!

Look properly…The speed of his technique is totally different a while ago…
He was…hiding the true power…!!

Shit…! Why…It’s not supposed to happen…!!

You can not win me any more…"Akiramero=※give it up"

Your heart is in a state of chaos…You can not make an accurate attack under such conditions…
Even if you continue more, you will only show a foolish figure…
"Isagiyoku(潔く)※=not obsessed" go away.
And do not hand out to the villagers anymore

Does it mean like this?
"You should leave with the same humiliation as your father"…?

You heard it…
If you have pride as a samurai, take a match with a Katana, And give me defeat…Until then I will not decide my defeat…
If you do not accept this game I will erase the villagers…!

This guy…still saying that sort of thing

"Doushita?=※How is it?"
Do you have no guts to use a Katana?
Or is it just iron scrap?

You…Do you insult my Katana…?
Well…I am receiving your offer…
But if you would like me to use a Katana...
"Kakugo seyo…!!(覚悟せよ)=※Be Prepared…!"

Now you are talking…!

I don't know…But one thing I know ...
If he loses we just have to give up…

Ask your name before slashing you…
I am "Yoshida Shinsaku" …You are?

Takeuchi ... your name, your Katana ... and the pride of the samurai ...
Everything all break it!!

This you can not see my move!
Where is…

What's! So far away…

Your "foot" movement…I could predict your next action with that.
You’re so dirty…!!

You have chosen a shameful action as a samurai…
at the time you selected it, that your heart was already broken…
Such broken Katana suits you well for you…!

The game was decided…

Its Naive turns into a tragedy!

You guys…What are you doing…?
Are you showing off your own power again?

You…Why are you here?

"Why?"
I will return that word to you as it is

Were not you supposed to be punished for burning down the village the other day?
But, Unfortunately…the punishment seems to have not been enforced…

"Fun ~tsu!=※Angry reaction"
With just one "Youjinbou(用心棒)"※Samurai version bodyguard" like you, our system does not change ...

It seems like that,
In this way you seem to repeat the same thing again…

I just saw him once…

Do you know him?

What's? Certainly I heard that there is a man who was employed in the upper government section "Jikketsu"...It's him!?

Ah, He is not so long since he was hired…Many of us have not seen him so like you

Really…? I thought that it was a more experienced older person because I heard that it is a Jikketsu Youjinbou...But if he is an Youjinbou of the Jikketsu, is he our boss?

You should leave, Recently you are too violent against people…
I was hired by the Meiji Government but…I am not agreeing with your government's way of doing ...So I am occasionally coming to watch your actions in this way

"Samurai dono(侍殿)=※The word meaning "Mr" of the old" and Villagers…
Apologize for the Meiji Government's violence, I am sorry for unnecessary conflict.
Here I am...

You! You watch me? Do not say bossy things! I will not allow anyone who will oppose us…

Thank you for reading!
Arigatou gozaimashita!

Have not you seen the -Jingi-仁義 series yet?
My Original Samurai manga -Jingi-仁義 can be seen here!

All my mangas drawn in "Washi(和紙)"
It is a traditional Japanese paper made from 1300 years ago.
This is my Washi of post↓
https://goldvoice.club/steem/@ryo-6414/washi-is-process-work-dlm5nqgq

Oh Thank you!!
I will keep my manga work!
Thank you!😉

Thank you so much!🤗

this is such awesome work, I really need to take the time to take it all in.
Curated for CreativeCoin

Thank you so much! Yeah, It's very long😆
I want you read the -Jingi- when your time allows😃
Thank you for your vote and mention!👏