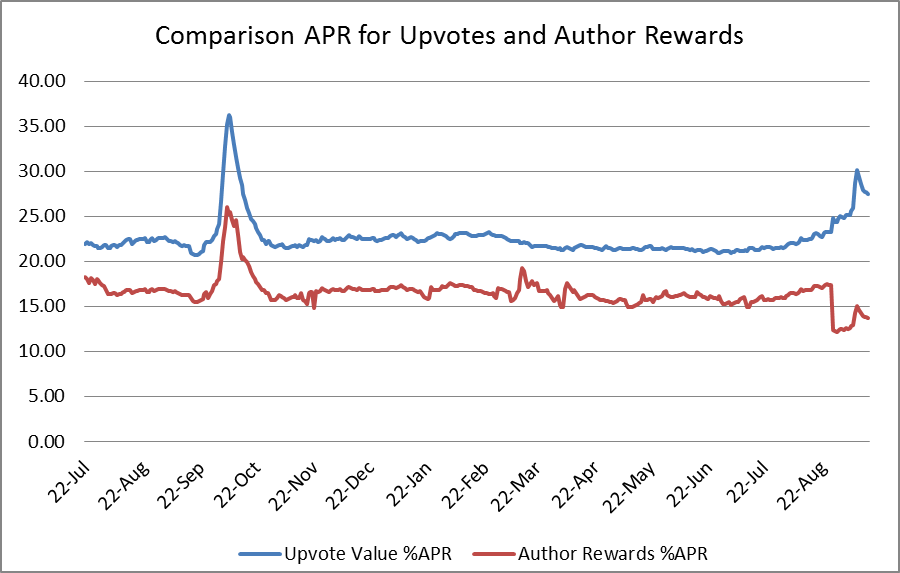 How much can you earn on Steem? What are the returns possible from the blockchain?

I answer such questions every week in the profit distribution posts for the MAPR fund and token.

I have also, periodically, published graphs of this data to see how the blockchain reacts to changing events and parameters. The last such update was The Stability of the STEEM Economy in One Graph (June 2019); that post also has links going back to the first such article.

Today, I present the latest graph and with it the effects of the recent hardfork and the economic changes it brought.

The stability of the upvote economy

One thing that has always struck me is the stability of the Steem blockchain regarding its earning potential in STEEM. The obsession with STEEM's value in Dollars remains an unhealthy diversion from how the blockchain really works. The FOMO and FUD as the market price rises and falls is predictable; yes, we all wish to see our STEEM holdings rise in value, but that does not always mean an increase in earnings.

The capital value of our holdings and the potential earnings are two different things; the first informs us about when to potentially exchange some coins, the second tells us how to earn such coins. Let me firstly put to one side the issue of posting. For many Steemians, the rewards from posts are much higher than they can generate from their SP alone. This is as it should be, else nobody would post anything. But such data is very individual and the earning potential from posting has many factors extrinsic to the blockchain, such as the time and effort spent on one's content.

So the graph below is not about the posting-economy but rather the upvote-economy. It answers the simple question: how much is an upvote worth relative to my active Steem Power?

One feature that I stressed in the past is the relative stability of the value of an upvote. You can see that the graph is generally flat with only a few ripples. The large spike on the left was HF20; many people were unable to interact due to a lack of RC, hence few rshares were created, hence few new rewards were paid out and hence the value of an upvote increased sharply. That took a good 3 or 4 weeks to fully unravel itself and return to its pre-HF20 value.

How the graph is constructed

So let us now focus on the far right-hand-side of the graph and the rather complex behaviour seen in the past 3 weeks or so. Before that, let me quickly explain how those lines are constructed.

The top blue line is the total value of an upvote in STEEM per voting SP. Because such numbers are small, I have scaled it up as an APR with the assumptions of using one's full daily upvotes at full power every day. Notice that for much of the year, an upvote has been yielding about 21-24% APR. This is much higher than the coin-creation rate of about 8.5%.

Now, with HF21, not all upvotes are equal and the reward curve is non-linear. This means I have had to make a further assumption so that data can remain comparable across the hardfork. Looking at the numbers, I have decided to calculate a full upvote value on the assumption of 1 million SP. Very, very few of us have this, but it sets a top value that is comparable with the pre-HF21 values.

The red line shows how such upvotes manifest as author rewards, with the added assumption of a 50-50 split between SP and SBD and adjusted with the new 50% curation rewards. If SBD has a Print Rate of zero, such as now, the author rewards are just simply half of the upvote value. If the value of SBD should rise above US$1, then author rewards start to increase.

One important thing to stress here is that your rewards will look different to these in absolute numerical terms but, if you took the same data every day for your own upvotes, it should have the same shape over time. Your own upvote value and rewards will be somewhere between 50% to 100% of the values in the graph. So if the graph shows 24% for an upvote and 12% for author rewards, a low-value post could be as low as half of this, that is, 12% for an upvote and just 6% for author rewards - most will be somewhere between these two extremes.

The effects of HF21

The graph above has been updated to the present, so let's focus on the recent past.

On the day HF21 was implemented, you will see the red line, the author rewards, move sharply down and the blue line, the full upvote value move slightly upwards. This is the obvious reflection of the new distribution where authors get 50% of the rewards.

The upward movement in the upvote value happened because of the 13% of the reward pool being allocated to SPS. The SPS did not immediately take 13% of the existing reward pool - that's not how it works - but rather took their share from the new distribution. Without this SPS allocation, I think the upvote value would have itself been either stable or dropped slightly. As the SPS-distribution reaches a steady-state then so will the reward pool and the upvote value. It hasn't as yet had time to do so as the Steem blockchain was offline for 24-48 hours, depending on which RPC node you used.

This created the second effect, the sharp spike upwards you see in the graph. This is for a similar reason to what happened during HF20; if people are unable to post and vote then the reward pool starts to increase, this then increases the value of upvotes. This all happens in slow-motion as it takes 7 days for the lack of posts to manifest as zero rewards. We are seeing this spike correct itself and we may, finally, see the emergence of a new steady-state for the earning potential of the Steem blockchain and the STEEM economy.

One small point here, the difference between the HF20 spike and the HF21/22 spike is that in the former case the blockchain was operating whereas in the recent case it was offline. If the blockchain is offline, then time essentially stops and then starts again at the next block. From the point of view of the blockchain, as time was frozen, so the reward pool faucet was also frozen, and so the spike is much milder than for HF20.

So what will happen next?

One very important parameter that is not explicitly shown but that plays a huge role in setting the value of an upvote is the size of the reward pool. This has been jumping around like crazy the past 3 weeks and this is reflected in the complex behaviour of the graph.

It is imperative for the Steem blockchain that users are active, and activity has a very precise meaning here: rshares activity. That means upvotes. It doesn't matter if you're online or not, set some automated upvotes to those people you follow, then you can read their posts when you're back online.

The lack of activity, and especially the relatively low value of vested and voting STEEM, is the reason why this blockchain with a nominal coin-creation rate of 8.5% is able to deliver returns of up to 25% per year. It isn't magic, nor "abuse", it is simple mathematics that 8.5% of new STEEM is distributed to about a third of the STEEM in existence. It is no accident that 3 times 8.5% equals 25.5%.

Activity that is off-chain does nothing to affect the economy on-chain. All those Custom JSON transactions are valid as social or financial interactions, but do nothing to create rshares or to distribute rewards. The relationship between on-chain and off-chain Dapps is an interesting case of tokenomics. There will be some effect on the STEEM exchange price, but from what I've seen in recent months such activity has had little effect on the earning potential of the Steem blockchain itself.

The new mantra is surprisingly the same as the old mantra: activity, rshares, rewards.

[The Stability of the STEEM Economy in One Graph (June 2019)](https://goldvoice.club/steem/@rycharde/the-stability-of-the-steem-economy-in-one-graph-june-2019)

The IMF Talks the Future of Cryptocurrencies - Video and Thoughts

Recent Diar Report Focus on PoS Cryptos: Interesting Data But Where is Steem?

We Are All Bankers Here On Steem

The Case for Showing Pending Rewards in STEEM

Very interesting to learn more about the new upvote economy and topic you teach about. I am here for so long and still don’t understand everything fully 😜

Hi, thanks for the comment. Yeah, been 2 years on steem and from very early on wanted to understand how the system really works - the mathematics largely hidden from view.

I'll update the graph in about a month; hopefully will remember to do so!

So most of this has been Peanuts teachers language, you know "wohwohwoh". But what I gather is that since HF21, rewards have gone down while upvote value has gone up. That and, blue and red. 😁 I'm doing my best lol

The obsession with STEEM's value in Dollars remains an unhealthy diversion from how the blockchain really works. The FOMO and FUD as the market price rises and falls is predictable; yes, we all wish to see our STEEM holdings rise in value, but that does not always mean an increase in earnings.

This is a good point; the value of STEEM shifts the earnings curve over, it doesn't actually change the curve's arc or direction.

Thanks for sharing this on PYPT! It is a complex issue and the more I read about it, I understand a little more each time. I am definitely not seeing a gain in 'curation' rewards yet, though, but perhaps over time that will improve?

Thanks for sharing and engaging with Pimp Your Post Thursday.
You’ve earned SHADE tokens

Thanks for sharing and engaging with Pimp Your Post Thursday.
You’ve earned SHADE tokens