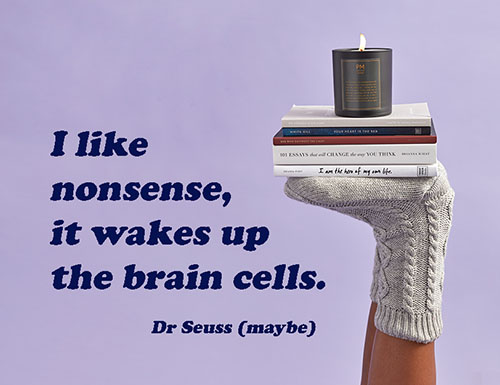 As I mentioned in the launch post, I'll try to post every couple of days till the end of this first Nonsense Contest.

Worth giving some updates so that new people may join and those busy scribbling can see that there has been some progress.

What's this all about?

This Nonsense Writing Contest will run for 10 days.
Starting date is Thursday 2 January, hence the end date is Sunday 12 January.
The nonsense writing may be verse or prose.
A user may submit up to two pieces.
Submissions may be inserted directly into a comment below or published as a post with a comment link.
Prizes shall total at least 28 MAPR tokens, valued at over 30 STEEM, to be distributed during the second week.
I shall post updates and include any notable entries received thus far.

If I've missed any, I'll add them to the next post.

Please go and show your appreciation.

And don't forget, the early bird gets shot down first.

I didn't say this was gonna be easy!

It's not so trivial to pack together a deck of words to create a tight, light, right nugget of nonsense.

Here's something Noam Chomsky came up with in his Syntactic Structures in 1957:

Although not in any shape or form humourous, Chomsky thought this was suitably meaningless.

I typed this into Unsplash to see what it would come up with. Within a jungle of green close-ups of green plants, was the image above.

I have no intention of spoiling the random fun with "syntactic structures", except insofar as to practise our own dereliction of diction with this simple exercise.

The above sentence is in the form adjective-adjective-noun-verb-adverb. Although rather sparse on articles, it can make perfectly good sense. So what can we do to mangle it?

I'll sprinkle some tokens of appreciation to anyone who can come up with similar examples that are marginally less boring. The point in this case is to see how far you can stretch the English language until you hear it snap, and then try to glue it back together into something cracked but no longer broken.

Images:
[1] Photo by Thought Catalog on Unsplash, Quote from Notable Quotes, ascribed to Dr Seuss but within a book I was unable to obtain and hence verify.
[2] Photo by Jason D on Unsplash