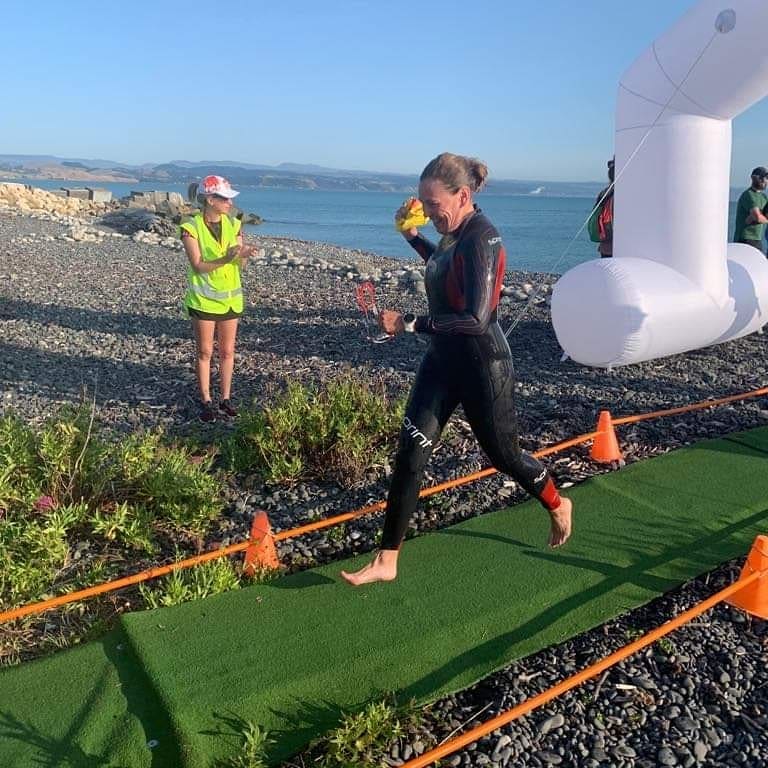 Coming out of the water

Last week was the New Zealand Aquathon Championships in the beautiful city of Napier on New Zealand’s East Coast.
I have raced in Napier before, I have done the marathon and half marathon there and last year we did the a half ironman as a team (but my swim was turned into a 1.4k run).
The aquathon was part of a weekend of racing. As well as the aquathon on the Saturday there were two ocean swim races (1k and 2k) and on the Sunday there was a half ironman and the National Championships for the Aquabike.

Finishing the half ironman run

Initially @run.vince.run and I were going to Napier to support a good friend of ours in his first half ironman. All the races had been scheduled for the same day so we thought we would do the half ironman as a team (it has only been two weeks since we completed the Mount Festival half ironman). Closer to the event they announced that they were spreading the races over two days so Vince and I signed up for the Aquathon which is a 1k swim followed by a 5k run. Even though I am used to doing greater distances than this I knew that the Aquathon was not going to be easy and I was going to have to try and swim and run a lot faster than I normally did.

Our friend ended up not doing the half ironman but did enter his first 2k ocean swim. He was worried he would get pulled out of the water for taking too long, but he smashed it in just under 50 minutes. We got to see him finish his swim before our race started.

For our race there were each three competitors in our age group (40- 44 years) and our gear was racked together so we could see where we were placed as we came out of the swim. I was hoping for another great swim like I did two weeks before and wanted to do the 1k in about 17 minutes. I pushed really hard in the swim and was disappointed when I came out of the water in 21 minutes. However, later on I discovered that everyone had a slow swim and although the water was flat there were currents that made it difficult.

Heading out on the run

When I got into the transition area, which was more difficult than it sounds running over a rock covered beach, I thought I had been first in my age group out of the water. I am glad I didn’t use that knowledge and slow my run down. I saw the other two competitors on the 3 lap run and on my last lap I realised that both of them were not far in front of me, so I dug in and tried to pass them. I managed to pass them (so I thought I had lapped them both).

I was wrong! One of the competitors had come out of the water 2 minutes in front of me (I hadn’t seen her wetsuit in transition). So when I thought I was lapping her in the run I was actually moving into first place. I ended up finishing just 20 seconds in front of her. My run time was not my fastest either but I did manage under 5 minutes per kilometre pace and had given it everything, and can now call myself National Aquathon Champion for my age group! Vince also won his age group!

The next day we did the half ironman as a team. I did the swim, Vince the bike, and then I finished our race off with the run. I managed a better swim than the day before and finished in 40 minutes, so I was pleased with that. Vince smashed the 95k (a bit longer than a traditional half ironman bike leg) in 2:50 and then I did the run in 1:55. It was a tough run in hot temperatures (they were expecting 33 degrees celsius) but I did my best to keep cool with lots of water.

It wasn’t easy to race after the race the previous day but were there to have a good time which we did.

Monday was Auckland Anniversary day so we had a long weekend away and took the opportunity to go to a lovely vineyard that a friend of ours works at for a wine tasting and delicious lunch. A perfect end to a great weekend away.

Nice work Kirsty. Your hard work is paying off.

Nothing can stop a consistent Runner.
@runningproject

Hey @run.kirsty.run, here is a little bit of BEER from @runningproject for you. Enjoy it!