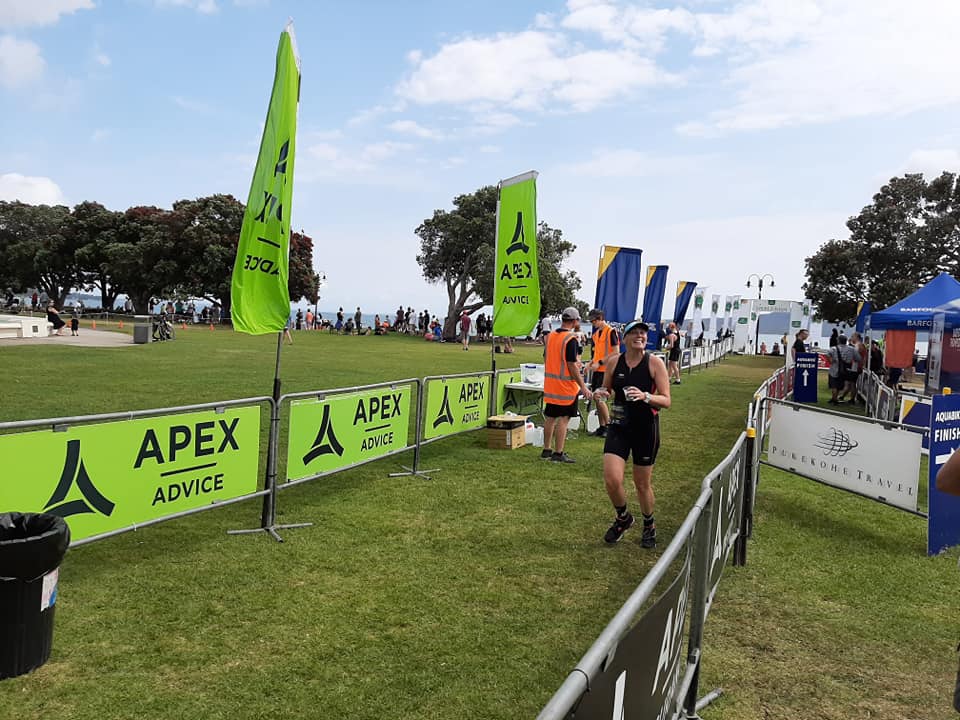 Completing the first lap of the 10k run. Vince thinks I was enjoying myself!

Earlier in the year my boyfriend signed up to a series of triathlons in Auckland (the Panasonic Triathlon Series). This is a series of 4 triathlons (or duathlons or aquabike) that take part in two locations in Auckland. I decided that I would do some of them with him if I felt like it. A few weeks ago the series was due to start at Maraetai Beach. The day dawned and the weather was awful. It was really windy and the rain was coming down heavily. Both of us woke up (I had signed up to do the sprint and Vince was doing the Olympic) and decided that neither of us would enjoy competing in the conditions. To help seal our decision they cancelled the swim (probably the leg that I perform best in comparatively, even though I am normally a runner).

This time I decided not to sign up until I knew what the weather was doing. I also decided to do the Olympic distance with a 70.3 coming up in 4 weeks I thought it would be good to gauge how my training was going. Admittedly I have only been focusing on training for the 70.3 for a month (I was focused on the Queenstown marathon up until then).

It was my first Olympic distance triathlon (1500m swim, 40k bike, 10k run). I will be the first to tell you that my cycle leg is by far my weakest. I am not overly confident on a bike. I have aero bars on my road bike but have not managed to get on to them for longer than 30 seconds in training so far. Whenever the surface is rough, or the wind picks up, or there is a bump in the road I go back to the handle bars and greater stability. Most of my rides I max out at around 26 to 27kph. I really wanted to do the Olympic triathlon bike leg faster than that. I had a goal time in mind (between 3:00 and 3:10) which I thought was reasonable. Vince thought I could go faster than that and predicted a time between 2:50 and 3:00.

Sunday morning was pretty good conditions for a triathlon. There was light winds and cloud cover which meant it wasn’t going to get too hot. The ocean at Mission Bay was probably the flattest I have seen it so I was confident that I was going to have a good swim. I completed the 3 lap swim in just under 30 minutes (and that was with swimming a little wide to avoid as many swimmers as I could- with a large group start it wasn’t possible to avoid them altogether).

I do have some work to do on my transition. I got my watch caught on my wetsuit and struggled to get not only my left arm out but also both of my feet. I had set my bike up beside Vince (@run.vince.run) and noticed (not surprisingly) that he was already out on the bike leg. I did the first three quarters of the first lap (of four laps) of the bike on my handle bars. At the second turn around I thought I would give my aero bars a go with the wind behind me. Up until that stage I had been cycling as hard as I could but was getting overtaken by everyone. I could not believe the difference once I got into aero position. I lost count of the people that I was passing! I was so excited and couldn’t wait to cross paths with Vince so he could see me in aero position (I was just hoping I could stay in it long enough to see him). On my third lap (and Vince was on his fourth) he passed me. I excitedly called out “Look I’m on my aeros”. In the end I did the last three laps down on aero the entire time. It is the longest I have used my aero bars. Even if everything else had ‘gone to custard’ (turned bad) I was so pleased that I had experience racing on aeros it wouldn’t have mattered. I ended up doing the 40k in 1:20 (by far my fastest ever bike)!

My legs were very wobbly off the bike for the first few kilometres of the run leg. I thought I would be running really slowly, and didn’t feel like I had full range of motion in my run until my legs loosened off a bit. I was also worried I had gone too hard on the bike but my run ended up going well, and I ran a faster pace than I had hoped. I was hoping for 5:30 minutes per kilometre for the 10k run but ended up doing 5:18 per kilometre.

I finished my first Olympic distance triathlon with a huge smile on my face in 2 hours and 49 minutes. I was so pleased with how my race went. I even got fourth place in my age group (just 30 seconds from a third place- but that didn’t bother me since I far surpassed any expectations I had). It is now four weeks until my next half ironman and I am going to continue to work on my cycling. I can’t wait to see how it goes and what I can do on the longer distance.

Crossing the finish line of my first Olympic distance triathlon.

The first time doing an event is always exciting. I'm not too keen on aero bars, my brother loaned me his TT Bike and I nearly killed myself going straight through a round-about island into a tree. Great post!

I know you were worried there Kirst, but you smashed it...nice work!

Congrats, sounds like you did great! Beating your own expectations and goals is terrific

Well done. Sounds like you really accomplished something there.

Nothing can stop a consistent Runner.
@runningproject