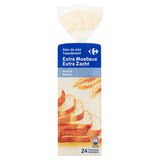 img from carrefour.eu (thats pre-toasted bread, 24 slices ... you can buy that with the numbers below at this day in time : €1)

Not sure what goes where anymore - i get the feeling most news outlets just promote "their own stake" since the fud and hype has always ruled to land since 10 years ago. Institutions getting into it has skewed things further ; alts dont follow up on BTC like they used to, its a fight between the original decentralized BTC and the absolute central cryptogarchy ETH ... so in case anyone still believed in high morale , as i have always been saying : forget the bla of salesforce and people with pretty avatars in suits who spend their days working seven startups and a family with seven kids and still have time to be on social networks 7 days a week ... (...right...) its ALL about the money. Worst fear remains the call to regulate : just like the big suits cant have little people making a buck (i mean IMAGINE a student paying of his complete loan from putting 500 in it ... cant have that, right ? That guy needs protection from himself) so in this case the big boys will probably (at the very least) try to get government to "protect retail investors from themselves" and ..plainly stated

shit might get fucked like hell ... but if you're in the millions it shouldnt be a problem - people could have been lucky this year still for instance : if you bought one hundred thousand worth of dot in january then today if you sold it you could buy an actual house in belgium (i read in the mericans prices for a house start at 50k ... that must be nice ...)

if they get their way and wrest control (like India who will outlaw "all cryptocurrencies not issued by the central bank" or europe who wants the digital euro to be immutable only up until government level where they're already talking about stuff like " an upper limit to the amount you can hold " (to stimulate the precious economy ..

preaching to the choir ? deaf mans ears - its been a stripmining business from the start, between the rich-kid filosophers and the wallstreet hype i have seen humans at their "best" since Crypton like i never have before

people make their own choices, im not a judge of anything but whats useful to me or not