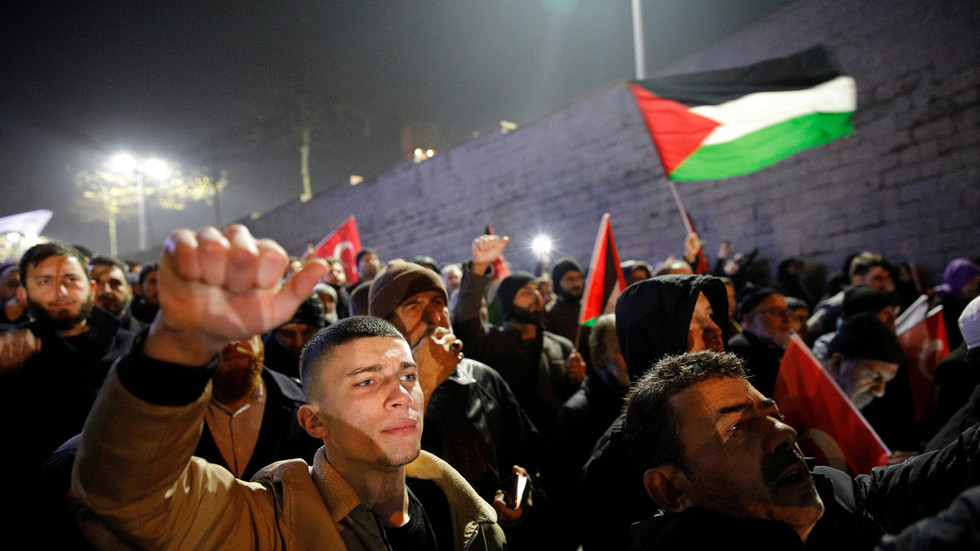 Demonstrators have flooded the streets outside the US Embassy in Ankara and the consulate in Istanbul, venting their rage over the newly-unveiled ‘deal of the century’, which Turkey has slammed as an “annexation plan.”

Hours after the much-hyped Middle East peace plan was announced by US President Donald Trump, demonstrators in Turkey’s two biggest cities came out in force to protest the roadmap to peace that many argue is skewed in favor of Tel Aviv.

Videos posted on social media show demonstrators chanting slogans and waving Palestinian and Turkish flags as they march towards the US Embassy in the Turkish capital. The rally, organized almost on the spot shortly after Trump’s announcement, drew in a huge crowd. Many could be seen holding their smartphones up to the night sky, turning the streets into a sea of light.

Hundreds turned out in Istanbul as well, voicing support for Palestinians who have already rejected the plan. Palestinian President Mahmoud Abbas called it a “conspiracy deal,” adding that it would be impossible for Palestinians to accept a solution in which Jerusalem remains the US-recognized capital of Israel.

While the majority of US allies in the region have either expressed cautious optimism about the arrangement or endorsed it, Turkey has lambasted the “stillborn” plan, calling it an “attempt to kill the two-state solution” and annex Palestinian territory.

"We will always stand by the brotherly people of Palestine. We will continue to work for an independent Palestine within Palestinian lands,” the Turkish Foreign Ministry said.

Jordan is another regional power to staunchly oppose the plan as inherently flawed, noting that the only viable two-state solution is one that envisions a Palestinian state with pre-1967 borders and a capital in East Jerusalem. Trump’s deal predictably drew wrath from Iran, which called it the “treason of the century” and said it is doomed to fail.

It's funny how people in Trump's administration and right wing media presented the deal as one that have "the support of Arab countries", as if they're all the same or as if one voice represents the region and the normal people. Clearly it didn't.

That's how the US government always tries to "sell" their narrative...
Most of the time, the opposite is the case.

The only one person who could resolve the Israeli-Palestinian conflict, was Yasser Arafat,and whit his murder that process was stopped, nevertheless, i believe that this conflict just could resolve it someone whit the ideas of Arafat... Nobody like a supremacist like #Trump can help to resolve any conflict.