Marshmallow and its benefits 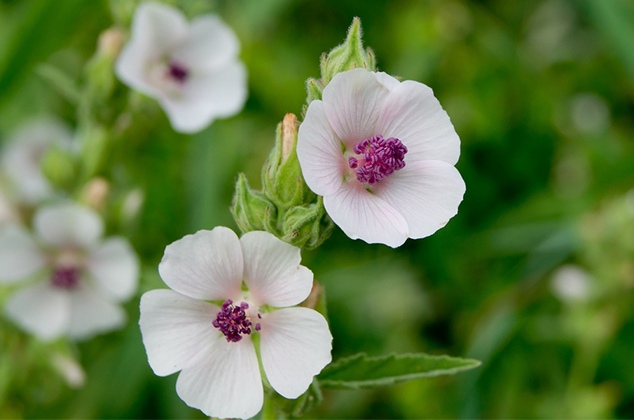 The marshmallow is a plant, whose height can be 2 meters. Young plants have individual stems, while old plants have about 10 stems. There is a thick stem, which is the main one, from which thin branches go, its direction is upwards. The leaves of the plant are regular, soft, if you feel them, they look like a bicycle. Leaves located under the stem, rounded, these leaves die in the initial stage of flowering. The middle leaves are also rounded, they have a heart-shaped base, they can have 3 or 5 lobes, and the upper leaves are whole.

All leaves have irregular denticles. The flowers collected in clusters are found in common peduncles, which are very short. The corolla of the plant consists of 5 petals, usually white, but sometimes pink. The marshmallow has a double cup, the outer sepals are a sub-container that has 8-12 sheets, and the cup consists of 5 sheets.

The fruits of the marshmallow are flat, disk-shaped and contain many seeds. The flowering of Althea begins in June and ends in July, and the maturation of the seeds occurs in early autumn.

The medicinal marshmallow grows in southern Russia and in its central lane, as well as in Ukraine, Central Asia and in southern and central Europe, in the northern Caucasus. And in all these areas, marshmallows are used as a medicinal and food plant. You can eat marshmallow, its leaves are eaten stewed, boiled and even raw in a young and immature form (peeled from the cups). The roots, boiled beforehand, also eat.

In the alluvial plains of the rivers, in meadows, in lakes, in bushes of bushes, wild marshmallows can be seen.

Since ancient times, marshmallows have been used in folk medicine, it is used in the treatment of various diseases. Root: a medicine related to mucus. It contains active compounds in the same amount as in flax seeds. Once in the body, plant mucus appears in the mucous membranes, this thin layer of plant mucus remains in the membranes for a long time, and all this time they do not allow the membranes to become irritated. As a result, damaged tissues regenerate faster and more easily and inflammation stops. Vegetable mucus is a protector that has a softening effect on inflammation of the plaque (for example, plaque in the larynx). Mucus also facilitates expectoration.

If you take an aqueous extract of the marshmallow root inside and in a large dose, then wrap the mucous membrane of the stomach. The higher the acidity of gastric juice, the longer the effect of taking this medication will be maintained.

Due to its high healing properties and mucus content, marshmallows are used for respiratory diseases and diseases of the gastrointestinal tract. Marshmallow water extracts are used for chronic bronchitis, tracheitis, laryngitis, bronchial asthma. Marshmallow-based preparations are antitussive, therefore they are used for painful cough (laryngitis).

Marshmallow root is often used for gastritis and gastric ulcer.

Thanks for sharing, marshmallows have been used in folk medicine, it is used in the treatment of various diseases. Root: a medicine related to mucus.