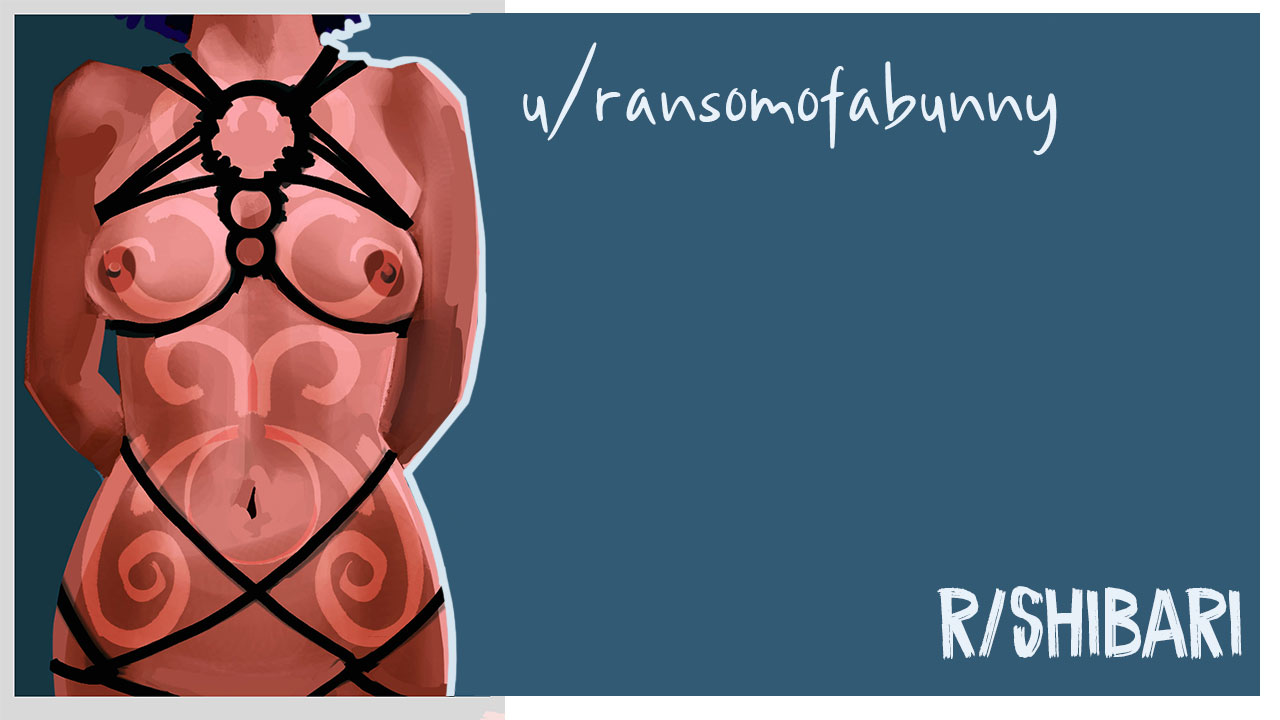 Some Shibari Art that I did last night.

A patron of mine wants to do a collaborative project with me that involves lasers and woodcuts, and I was to provide the base painting for them to work with.

As you can see the model is u/ransomofabunny on reddit/r/shibari.

So, here's a twitter link, and a video that's cut down to under 2:20 minutes.

Maybe @dtube can help me figure out how to upload videos on their site.

You got her consent for it?

She put the photo up on the subreddit, I just painted her portrait and provided her attribution link, so concerned citizens such as yourself could go ask her those questions.

Her response was something along the lines of "that's so fucking cool" and she followed me on twitter.

Do people regularly ask you about the ethics of your activities online?

I don't do much online relating to other people, so the ethics of my actions are rarely ever even a question.

I'm also not concerned about your ethics. I was just making a quick note because if you do make and sell a piece of art with her image on it, and she sees it later, and she hasn't heard about it, she could either be glad or dislike it, and I wouldn't like to make a product with an image on it, where the person depicted is unhappy due to my use of their image.

In terms of attribution, not like I am concerned or care about it, but you may have a misconception of how copyright works. Images posted in public are not public domain, meaning that the fact that you published something in public doesn't mean that someone else can copy that creative work and use it for commercial purposes.

All in all I like your art, and while I'm not concerned about whatever ethics or rule-following are involved, I did want to ask what your level of involvement was with the person depicted and how aware she was of what you were planning to do with her image.

Thanks for your concern -- I see where you're coming from now, and as a short answer -- that is something that I pay attention to in my projects.

As far as publicaly posting artwork that I have created by gathered reference online -- I'm solid.

When I use models as reference for my own work, there is sufficient differentiation, as I typically use the model's form or expression or shape of hands, and then modify the painting further. You can see this process in my current video series that I've been sharing here on Steemit and Youtube.

As far as the project mentioned above that my patron was interested in exploring -- you are 100% correct.

It is likely that since my friend would be using a derivation of a derivation, in a low scale financial experiment [laser cutting an image on wood based on a painting that I provided] == there would not be a problem in execution.

However, in advertising the project, there is a small community of shibari people, and likely an even smaller community of amateur models / exhibitionists who are interested in sharing their photos online.

I made sure when I created this work to share the painting immediately with the model, and post the link to both the subreddit and the model's profile as a courtesy, and because I was not fictionalizing the portrait -- it was a direct copy of a photo, and If I wanted to commodify the project later, I would need to do so with her blessing.

I've done a couple of years worth of small kickstarter projects now, and the patron who wanted to explore this sort of laser woodcutting X digital painting collaboration and I also spoke immediately after the painting above was taken care of.

I also informed her at this time that if she was interested in using this particular portrait, we would likely have to profit share or otherwise compensate with this person in order to make the project successful, and not pollute r/shibari as a potential marketing source.

I am willing to bet that the monetization I've received via steemit is negligible, and that the practice of using even non-public domain likenesses for educational painting / process videos / free sharing -- as I have thus far, would not be a violation of copyright.

I also think that my patron exploring using my painting as a lasercutting foundation would likely not be a problem either.

I encouraged my patron to model her own shibari poses, if she wanted to have more control over the poses, and make more money on the project. -- For the reasons I mentioned above.

My patron agreed, and I assume that if anything further happens with the portrait I painted, it will simply be an art experiment using a laser cutter in a public space -- likely simplified into line art, and beyond any sense of likeness recognition -- if that's what she chooses to do.

At the moment, I think my patron is more interested in the possibilities of shooting her own reference, and borrowing a tablet to trace the outlines of her own body, and then transfer that work into the laser cutter. -- In this way, she won't have to share the income from the kickstarter [likely 200 to 1000 if she's lucky or hits a nerve] with only herself -- rather than with a model and an artist.

To answer your question -- I did navigate those concerns because they are important.

Thank you for taking the time to respond, and my apologies for being flippant in my previous response.

I'm very tired of dealing with feminists who have problems with the fact that I paint naked women, and sex comics. My apologies for miscategorizing your concern.

As far as copyright is concerned, I think I have a decent enough sense of it not to end up on the wrong side of a lawsuit -- Though admittedly, my earlier pin-up work was just straight stylized photo copying. Fortunately, I posted that work online for free, and only made a living by commissions -- which required modification, or by donation on patreon.

Since then, everything I do for my own projects has sufficient differentiation, as I am adopting it into a character that is useful for that project or commission.

Some of my work is just straight up flirting with disaster though -- and I think I'm only saved by my process and lack of competence.
[NSFW] - Liber Vulva
https://drive.google.com/file/d/1_RGXzWL4H0rWMKilcqZISX_M6BXJ2woJ/view

My Liber Vulva comic used a Sasha Gray as a model for some of the major sex scenes and a handful of style / tone setting panels. Fortunately, it's my practice MOSTLY to set up the photo reference side by side -- so there is some lost in translation. I also allowed other influences to come along -- for instance, a former girlfriend of mine is convinced that I used my memories of her face and behavior as primary inspiration for the project -- which is likely true. I also ripped off television screenshots from a netflix series at the time for the fight scene, and then did my best to translate the poses into the character.

Thanks for actually looking out for the model's economic exploitation, and for my own legal protection. I have been keeping these things in mind.

Maybe you're a concerned citizen, and thought I tied her up against her will, and then painted her portrait and posted it on steemit.

Nope, obviously didn't think you tied her up. I saw her profile and all. Just wondering if she knew.

Also, you might have misunderstood how copyright works. Read up on it, because attribution is not all that's necessary for legally using someone's image for commercial purposes.