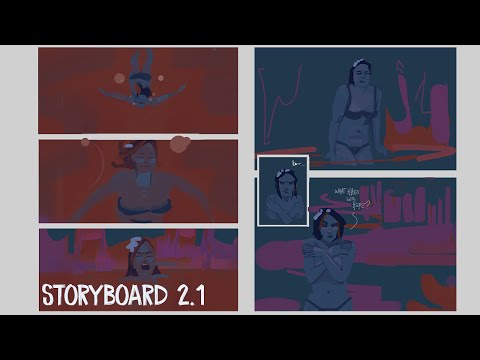 I decided to consolidate my videos for this project into a 100 Days of Comics series.

Here is the video recording from today, where I work on rough drafting out some pages that I consider to be a "storyboard".

For those of you who are interested in how I am monetizing this project -- it is broken down as follows:

Patreon brings in money each month.

[these will be the most advanced pages in the storyboard, as I completed these pages to the level of completion that I want to have for the entire project. This way, I know what is considered a rough draft, and what is considered a final -- in terms of image development.]

The Kickstarters are structured in such a way that each one has some level of difficult, but attainable goal, which then brings in a bit of money, which helps in addition to the Patreon Money on a per campaign basis.

I anticipate that I will be fulfilling this storyboard project, and then expanding the storyboard to include environment design and character design. [Which I may or may not experiment with another small kickstarter -- a la Environments of Wonderland - X Phantasmagorical Landscape Paintings. -- something like that.]

Once the storyboard is way too classy for anyone to actually consider a storyboard any longer -- I am going to start an episodic release of the final project.

Episode 1 will be about 30 pages, and will contain the 9 pages from chapter 1 and 2, as well as an extension of those pages, into adjacent // 'tweener' pages, designed to increase the flow and depth of the story.

These Episodes will also be released on Kickstarter in digital format.

I expect to do between 3 and 4 episodes, in which I develop the pages created in the fancy storyboard into a fancy finished project one episode at a time.

These 3-4 episodes and the Landscapes of Wonderland, will only take something like 15- 20 days to complete each, and I do not expect to actually get that much money from each of these campaigns. I consider them "Quickstarter" projects, or possibly even simply an avenue for accepting commissions during the actual project, which helps sustain my work. during the course of this graphic novel project.

Since I am not employed by FilthyFigments, or Slipshine, I am not able to earn money serializing comics on their platforms, and then transfer them over into a graphic novel format on Kickstarter.

This method I am describing here is my solution to that lack of consistent funding needed in order to execute a large scale project.

The 100 Days of Comics challenge is one that I found a while ago on Youtube, and just discovered today -- to be a popular-ish trend challenge within the comics community -- as in, there are others who have done it, and will do it in the future, and people are actively / recently involved.

I only have ~50 subscribers on Youtube, as I basically just restarted my channel approximately a few days before joining Steemit.

Fortunately, I discovered that people here on Steemit enjoy my videos and posts, and that it is possible to earn a bit of money here, while crossposting from my youtube account.

I won't earn a ton of money, but it will be another helpful bit of cash, and the regularity on Youtube as well as participation within a community challenge might just be enough to get my youtube subscribers up to 1,000 -- which means -- MONETIZIATION USING ADSENSE! wooo.

Of course, at 1k subs on youtube, you're only getting about as much as a low end post here on steemit -- but the monetization window is in perpetuity, whereas the window here is only 7 days.

So, this is a long term daily strategy -- that I might as well do, since I am planning for the long term with these projects anyways.

I think this approach is sophisticated enough to where I will not be homeless or hungry while completing this graphic novel project.

There are also a couple of other -- tricks up my tricky sleeve, that I will explore when the time is right. But for now, this is way fancier of a plan than I had last year, and I'm looking forward to seeing how it goes.

Fortunately, you will too!

Right now, I'm still on Level One -- which is to get to 1300 SP here on Steemit -- and to share that with whomever I can bring in from other sites to help onboard them into Steemit and @onchainart Woo. Go team.

But when that is done, I'll be going over some of the components that I mentioned above here in a way that helps people manage larger projects themselves.

Want to help out?
Upvote, and subscribe on my youtube. Then I can drink from that sweet sweet ad revenue while every other crypto enthusiast is getting demonitized.

Good stuff @rootdraws! Wish you the best on your project :)