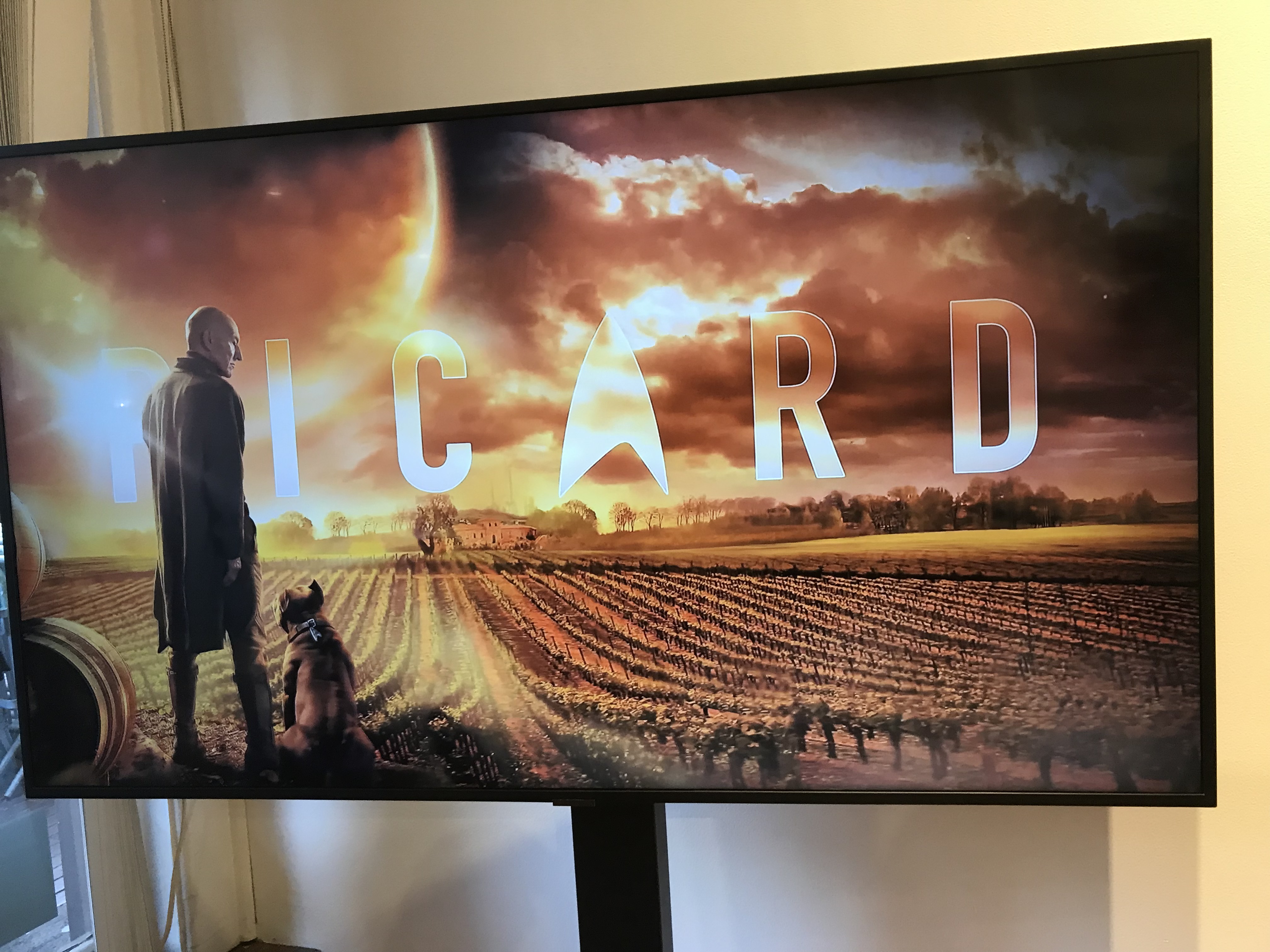 Hello fellow steemians I will now attempt to take you where no man or no one has gone before. To the Picard Star trek Museum at San Diego Comic-con 2019. I was going to sit on this story till the Picard premiere but with news of a Picard movie, I think its time. Now, not only will you get a tour but you will also hear the story of how I almost got Patrick Stewart's autograph. The Picard Museum was two blocks from the convention center. The same location a year before they had a Discovery Star Trek Museum. The museum was not that long a wait about 20 minutes. When you walk in theres a person who greets you and gives you a free Picard Lapel pin.

The museum was packed with goodies. Props, costumes, ships, photos and of course wine. I went two days in a row to get the wine glasses but they were sold out both days. They also had a gift shop where I spent sixty dollars the first day and thirty the second day. I got a coffee mug and a couple of shirts. EXPENSIVE! My favorite item was the Borg Queen skull. It was so detailed and real looking, lets all admit it, First Contact is the best TNG movie. Good now that were all in agreement. I also laughed my ass off at the wedding photo of Riker and Troy. Ive seen Enterprise prop ships before but never this close up.

Inside the con they had a Star Trek Picard experience. I'd been chicken-hawking the booth for two days trying to find out how you get Patrick Stewart's autograph. When the con opened on Saturday morning I ran my ass off to the Picard Booth. I was twenty seventh in line and it took another two hours to get to the front. When I was in Line a lady came over and said. When you get to the front you will go into a teleporter room. The door will close behind you. You will be teleported to three different planets. If you end up on a planet that is under attack you've won the opportunity to get Patrick Stewart's Autograph. I did not end up on the right planet. SHIT! I talked to the lady afterward and she said there will be an overflow line. So I waited till Stewart Showed up and started signing and got myself in the overflow line. I was fifth in line so I guess they didnt tell a lot of people. All of a sudden a security guard comes up and says NO overflow line forget it, break up the line. I ran over to the Picard booth and like Natalie Olson ratted out the security guard to the lady from earlier. She Said Come with me. We went and got the four other people still waiting and marched in a line towards the Picard Booth. When we got there we went right to the front. That's when we see Stewart get up and walk away surrounded by bodyguards. I missed it by a minute. They thought there was no overflow line so they stopped on the last autograph. I was crushed.

I grew up watching Star Trek with my brother. I remember loving the different planets they visit. I loved the costumes and stories and aliens, I bought the Star Trek Mego dolls in the 70's and had a stupid shirt that said BEAM ME UP SCOTTIE. I saw all the Star Trek movies in the theaters. I watched Next Generation with glee. Ive watched all the TV shows ad least three or four times over. Except for Deep Space Nine, sorry. Star Trek is kind of a philosophy and kind of a way of life for some people. It holds a special place in my heart. Its entertaining as much as it is knowledgeable. These characters these heroes stay with you and kind of mold you in a way. The Prime Directive itself is a road map of decency. A reminder that we all have value despite the odds. The needs of the many outweigh the needs of the few. Simple, poetic, perfect. Thanks for hanging out with me today at The Picard Museum. Untill next time my Fellow Steeemians!

... teleporter room... wow dude you got teleported?!? Seems like that is worth pretty cool even if you didn't get the autograph :) Looks like a lot of cool Star Trek stuff on display!