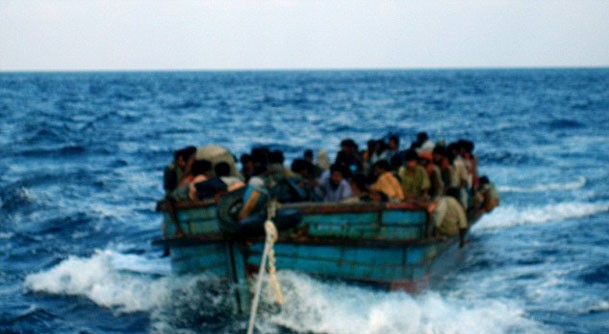 Pathein — 48 Rohingya genocide survivors are arrested by Myanmar navy off Pathein coast of Irrawaddy Region today, AFP reported citing a local official, and it is yet to be confirmed where they departed from.

This is one of the groups arrested among many other groups, according RVision’s investigation, believed to be on the way to their destination in Malaysia and Indonesia currently or have already reached their goal in the last couple of months.

About these victims it is feared that either they will be sent to the open-air prisons called IDP camps, or imprisoned in the locked prisons. But in the case of Rohingya, those who are imprisoned seldom come home.

This is the second tragic incident of Rohingya genocide survivors enticed by human-traffickers this week as a boat carrying nearly 140 victims capsized killing at least 16 off St. Martin island Tuesday.

Among those arrested by the authorities in Myanmar previously while being trafficked, 22 were imprisoned for two years, nearly 200 were sent back to IDP camps while 95 more are yet to hear the result of a genocidal trial.

The Rohingyas in their homeland not only face extremely tough restrictions but also are caught in crossfire in the fighting between the local rebels and government army with little access to healthcare, education and livelihoods.

In the camps of Bangladesh, about one million refugees live dire situations forcing them to risk their lives in search of a better life.