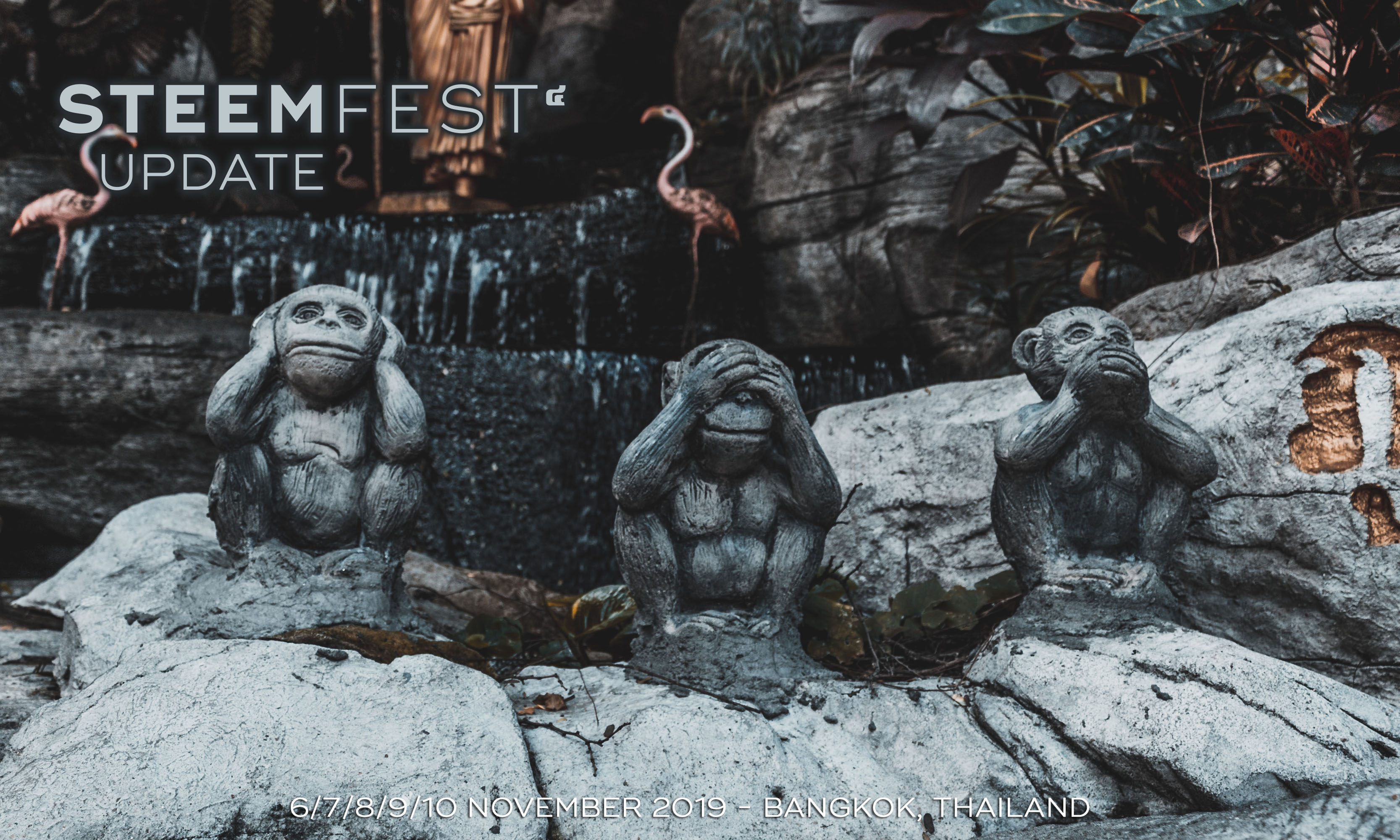 This was a week of finalising deals for the event. With an unforeseen cutback in one sponsorship I needed to emphasise on the costs with my final negotiations with some suppliers. Luckily help came in with a new sponsor, but the event is still looking for a couple of "K" to close the current budget.

For that matter I decided to open up some adspace in the program / map of Bangkok booklet which is handed out to every attendee of SteemFest and distributed online as well. If you have a product or service you would like to advertise and meanwhile also help out SteemFest closing the budget, please connect with me through steemfest@gmail.com.

Introduction to Thai etiquette and do's and don'ts.

As many of you will be coming from "the west", and some of you for the first time head "east", you will be introduced to a new culture. Although November is the start of the "cold" season, the dampy heat welcomes you at the airport as well as the seemingly random chaos along with it.

The trick to deal with the temperature and Thailand in general lies within this weather actually: Stay cool. Physically cool, by moving slower. You notice immediately on the street: the pace of pedestrians is significantly slower compared to for example here in Amsterdam or New York for that matter :) "No sweat" is the idea. But also mentally: stay cool. People losing their temper in Thailand are viewed upon as if they have mental health issues or are of poor breeding.

From this site I picked up: Maintaining your cool under tough circumstances is called “Jai yen” or “Cool heart”. Thais place a high value on individuals who are able to respond to upsetting and frustrating events with moderate and reserved behaviour, and those that are unable to control their emotions are conversely regarded as being childish, ill-mannered, or possibly mentally unhinged.

Personally, I try to apply this at all times during my negotiations, although sometimes it can be difficult. I am a "farang" (foreigner) and aiming for the best price. But so far it worked out, I think :)

So, just remember: Never loose your temper in public, don't get upset, or at least: don't display that you are upset. It won't get you very far.

Another one: Thai are very much about hygiene. People live close together, move close together in public transport. People have to live and move within a closer "personal space" and add in the hotness it is nice to look after your hygiene. It is common for Thai, if possible, to rather shower quickly a couple of times a day instead of one long shower.

Public nudity is also frowned upon. Although there are differences when going to the islands of Thailand obviously, which have an adjusted look on things, due to the sheer volume of tourists. But if you would walk around shirtless in Bangkok it could mean serious trouble if you run into a police officer.

Hygiene, manners and dress-code also come into play when visiting a temple or so-called "Wat" in Thailand. As tourist it is common to walk around in your "tanktop" and "shorts" or "skirt" but wearing this means you cannot visit a temple. You should dress appropriately, which means covering pants / skirt over your ankles and minimum a t-shirt, but preferably a long sleeve shirt. Or bring along some sarongs to impromptu cover up yourself and respect this part of Thai culture.

There are many more tips & tricks, which I assembled past week and put on the SteemFest Helpdesk FAQ section: "Tips & Tricks - Thailand". It is worth reading them if you come to Bangkok!

- SteemFest tickets will see a price hike next week on friday 27 september (!)
- Book your hotelroom before they run out: in November the tourist season starts in Bangkok and Prince Palace is, thanks to it's affordability, pretty popular. Booking Link 1 - Hotel Tower 1, Booking Link 2 - Hotel Tower 2
- @gtg called around the world to setup some Check out his post!

Have a nice weekend!

_Rewards from this post will go to organising @steemfest_
(simply by setting the beneficiary)
SteemFest's ticket reductions are made possible by generous donations from:
steemfestroadtosteemfestthailandfomo

All nice tips Roeland! I have to take notes, remember bringing long trousers or skirts for the temple! Thanks for the updates.

you are correct, i was wrong. adjusting!

I was wearing such thing, below the knees, but with some part of legs exposed, seemed fine, but for grand palace should be more strict.

It's great to see more updates as the date of the event comes closer and closer. Good to see the new speaker names, congrats!

Love you man, Your a great event organizer, an amazing supporter of Steem and an over all good guy.

I hope to be able to make it this year, am just so oh so crazy busy with so many cool projects.

The great majority of Thai people are very welcoming people always ready to help ;) Welcome to the land of smiles !

Going around by TukTuk in Bangkok is so much fun

Bargain with the driver is even better

Yes, it's a nice and fun tourist attraction that is worth doing at least once.

I, for one, probably will not be saying “no spicy” - but we shall see I suppose 🙂

If spicy food is not a problem for you, I suggest you try papaya salad (street food), It's fresh and very tasty.

Will do, thanks for the tip!

@roelandp, These shared Tips and your experiences are appreciable aspect brother. Hope that this will be helpful for the Steemians. Stay blessed.

Your post was upvoted by @steem-ua, new Steem dApp, using UserAuthority for algorithmic post curation!
Your UA account score is currently 8.645 which ranks you at #1 across all Steem accounts.
Your rank has not changed in the last three days.

In our last Algorithmic Curation Round, consisting of 90 contributions, your post is ranked at #1. Congratulations!

@roelandp, These shared tips and experiences are a notable. Hope it will help other Steemians too, stay healthy stay blessed :)

Thank you @steemfest & @roelandp for reminding me that. I just tried to encourage @roelandp for the help you are doing by providing all the details & I wish you to stay healthy and keep it up.

thanks for sharing , you are the best :)

How about adding some of @travelfeed's travel guide posts on Bangkok? There's a lot of Steem community contributed information about their travel in Bangkok so every attendees should have a read or two to get an idea of Bangkok.

Wow, thai's culture seems to be a lot similar that of India.

Wow, thai's culture seems
To be a lot similar
That of India.

Good jhob friends. This is culture, photography like for you.

Thank you for the update, @roelandp! I'm even more excited now! Got my SteemFest4 ticket, my hotel room booked, my flight tickets from Helsinki bought. Looking forward to the event and promise to keep my cool! ;)

Nice! see you in Bangkok!

I am so excited for everyone who will be attending. Alas it does not appear to be possible for me this year, but I will set my sights on next year! I can't to hear all about it and hopefully will be able to watch some live feed. Thanks for all you do to pull all this together, @roelandp! I'm sure it will be a smash hit like last year.

Thanks for the mention. See u on the festival

Thanks for the tips! We have similar eitiquette here in the Philippines, except we don't have temples so that would apply to churches 😊

And great to see @jpphotography on the list. All the best!