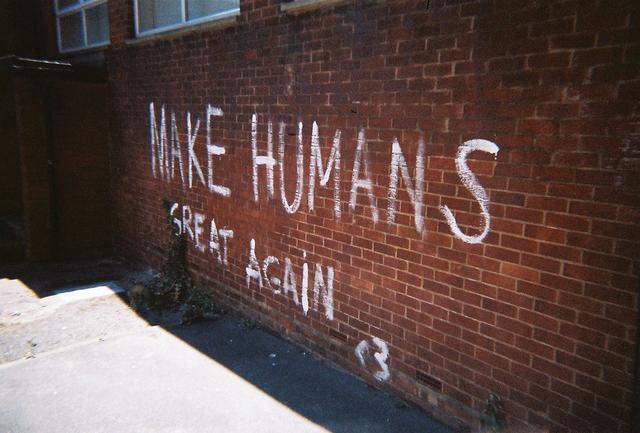 I've written several times about how Socialists, should they prevail in the 2020 election, will dispose of the useful idiots once they are no longer useful. We live in a culture of death, one where each and every life is disposable- and it's time to look at the how's and why's. No society predicated upon evil can, or has ever, survived, so if America is to survive as a society this has to change. Although the legalization of abortion wasn't the starting point of the evil that pervades America, it has come to symbolize the wanton disregard for human life and the culture of death.

Evil takes on a plethora of forms in our everyday lives. It can be the ultimate evil as in the devil incarnate (i.e.: murderers and rapists), or the banality of evil such as simple courtesies falling by the wayside (i.e.: not holding the door for the person behind you). I have discussed how any person can be turned into an authoritarian tyrant given the proper situational circumstances. The true nature of humans is one of self-interest, a “how will this action benefit me in the long run?” attitude. How has the progressive movement made evil a common occurrence? Lack of morality, ethics, and the inability to determine what is a valued life; and what is viewed a mere inconvenience, to be removed, much like a dermatological imperfection.

Things like this happen slowly, incrementally... generationally- what David Icke calls the "totalitarian tiptoe." People from my grandparents' generation would be horrified by things we hardly notice nowadays. For example, in those days not holding a door for someone would be viewed as unthinkable, now it's become commonplace. Each generation seems to think it's incumbent upon them to push the envelope of incivility to newer and often more bizarre limits. Abortion at the time of Roe v. Wade was an almost unthinkable necessity- a last resort... now it's celebrated. As Mother Teresa said: "There are two victims in every abortion- a dead baby and a dead conscience." With Roe v. Wade, America lost its conscience and with it the sanctity of human life. A lesson lost in all of this is that making something legal doesn't make it moral or right.

Over the years I have watched the erosion of society, and the uprising of “wokeness.” Nothing has prepared me for the utter lack of regard for life as we currently see in today’s world. Serial abortion as a form of birth control, and in some cases an appalling sexual fetish is being seen more as society degrades and crumbles, before our very eyes, each passing day.  Evil is now taking the form of utter lack of once commonplace morality and disregard for other’s lives (this isn’t just referring to the fetus. The father rarely has a say in the fate of his unborn child).

Abortion doesn't empower women as the radical feminists would have us believe, it only degrades society at large.  "'The “radical' feminist Susan B. Anthony referred to abortion as "child murder" and viewed it as a means of exploiting both women and children. Alice Paul, who drafted the original version of the Equal Rights Amendment, referred to abortion as 'the ultimate exploitation of women.'" However, the current wave of feminists aren't interested in equality, they want more- they want power and what is more powerful than the power of life and death over another human being? It doesn't matter that they're destroying the lives of young women in the process, these are odious, unattractive women that will never get pregnant- the purple-haired harpies who despise men.

The inconvenience of an unplanned pregnancy has led to the normalization of disposal of human beings reduced to nothing more than medical waste. Disregard for life, and the lack of fortitude to take responsibility for one’s actions has now forged a path for not only death in the biological sense of a person not given the choice the mother has chosen for them; but also, a symbolic death. A death of social culture, of ethics and values we once held as a collective society. An impersonal and spectral death that accompanies the physical death of discarding that “mistake.” Something that was once seen as a last resort, an act of pure desperation, and something to be ashamed of; is now celebrated as some curious rite of passage for modern women.

The death of responsibility fits perfectly into the victim culture. The 1960's marked the all-out assault on Christian values viz. morality, ethics, etc.. The removal of prayer from schools was a necessary precursor to abortion and the introduction of the death culture. Morality is not a personal matter and it can't be made up as one goes along (situational ethics). No society has survived without a concrete set of values and it is Christianity that allowed America to not only survive but prosper for over two centuries. Once prayer was removed from schools it was removed from the next generation of adults- the atheists behind the movement knew this all too well.

In a world where the counterculture is made up of conservative values, the progressives have gone front and center with their “woke” culture. What used to be rebellion for young adults is now the norm. Drinking, having sex, and experimenting with illicit substances is an everyday occurrence. The people who are engaging in voluntary celibacy and/or committed monogamy, church, and family, are the new rebellion. Women are no longer responsible for their actions, and it is seen as noble in a sense to take many sexual partners with no regards for safety. This new outlook which was a concerted effort by the feminist movement; is an undertaking to see women as “free and empowered”; as if they were enslaved or held captive prior to this movement.

One of the fundamental tenets of democracy, or self-rule, is personal responsibility. When that is removed from the equation, chaos results.  In a society where everything is deemed acceptable behavior, the moral fiber of civilization crumbles. The loss of traditional values helped to cause the fall of Rome. What makes you think loss of values are not collapsing the world we live in currently? We live in a world where everything is acceptable, except the yearning for traditional values -- this is the new punk. When responsibility is divorced from reality civilization disintegrates. Abortion is only partially to blame. People's actions are driven by the information they absorb- and in today's world of the instant dissemination of information the individual is constantly bombarded with images. Tyrants and totalitarian governments throughout history have understood that to control the flow of information is to control the culture.

Hollywood, the mainstream media (television) and virtually every other purveyor of information supports "a woman's right to choose." In other words, they support a culture of death. Abortion is not synonymous with woman's health care, in fact it's the opposite. Healthcare protects lives, abortion destroys it. Similarly, government supports the culture of death. If you think about it, what is government actually good at? War... it's the only thing other than stealing money through taxation (to support wars) that government does well. When government controls the flow of information, the culture of death prevails... just look at Nazi Germany, Maoist China and the USSR under Stalin. These were also Socialist/Communist regimes where human life has no value. America is becoming incrementally more and more like them... abortion is merely a symptom of the culture of death. Like I keep saying, America is at a crossroads... Socialism = Death... Freedom = Life.

Long time I did not see your articles 🥰

He's baaacck! I've been having a few health problems (and financial) plus I've been doing some writing on WeKu.

Time to get busy here again. They kicked me off Twitter, so you haven't seen me there either... I missed ya!

I missed you too! I also had health issues and a surgery in my breast but I might write about it very soon! I conquered the beast! I wish you well my dear friend

I'm happy you're all right again my dear friend! I'm not allowed on Twitter so I can't keep up with anyone there.

Merry Christmas and I hope to hear from you again before New Year. My dog had a stroke so I'm spending the day with him. He seems scared everytime I go out.

I've been kicked off Facebook for over 2 years now- they don't like the truth either. I'm on MeWe.

Thanks I'm out of town I will check it tomorrow

When responsibility is divorced from reality civilization disintegrates.

Yup, we're witnessing it every day!

READ THE ANTI-COMMUNIST MANIFESTO! FOLLOW MY ACCOUNT, I AM FIGHTING A CIVIL WAR AGAINST COMMUNISTS/SOCIALISTS IN CHILE COMING FROM VENEZUELA! AMERICANS DON'T GIVE UP YOUR FREEDOMS FOR WITHOUT A BRAWL. MARXIST-LENINISTS HAVE KILLED OVER 150,000,000 INNOCENT HUMAN BEINGS! AUGUSTO PINOCHET UGARTE DID NOTHING WRONG FROM 1973 TO 1990! A SOLDIER SHALL NEVER SAY SORRY FOR SAVING HIS NATION... :D