Man of the Hour... How Does a Famous French Photographer Relate to Epstein 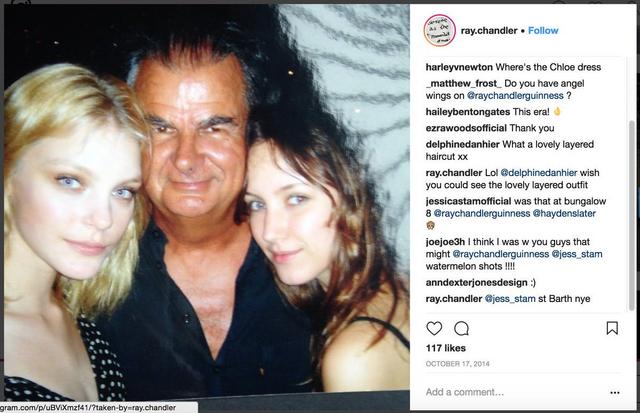 Anyone who's been following the Epstein saga and the relationship between Epstein, the Clintons and the allegations of sex trafficking using the fashion/modeling industry should recognize Eminem's former girlfriend Rachel Chandler who Qanon indicated plays a big role in recruiting young girls for sex with older men. The other girl in the Instagram photo is model Jessica Stam. However, it's the man in the photo that's led me on an odyssey that's taken me about 6 months. Being that this is a work in progress, I'll give you what I have so far. The death of Epstein notwithstanding, there are still a lot of questions unanswered and the idea that his death is somehow the end of the sex trafficking ring of which he was an integral part is ludicrous.

After I first saw the photo I asked for help in identifying the man from people with far more computer expertise than me... to no avail. So, like any good investigator- I guessed. He looks like someone connected with modeling and/or the fashion industry (he was also with a model and "photographer" in the photo. Rachel Chandler claims to be a photographer, but her photos are disturbing at best, often featuring young children in compromising positions better suited for adults. I then proceeded to watch hours upon hours of modeling videos including Victoria's Secret shows (Epstein was connected to Les Wexner, owner of Victoria's Secret). You can't imagine the sacrifice of watching about 100 or so hours of beautiful women parading around in their skivvies, but  I was equal to the task and finally found our boy in a documentary about Laetitia Casta, a former Victoria's Secret model. His name is Patrick Demarchelier, a well-known French fashion photographer- also famous for being Princess Diane's personal photographer.

So why is a hot shot French fashion photographer on the Lolita Express with the likes of Ray Chandler? The modeling industry is famous for recruiting young women, often as young as 13 or 14 to be models. The power that photographers have over a model's career is also as profound as it is well known- it's almost always in the best interest of the model to cater to the whims of the photographer if she wants to get ahead in the business. I also found this documentary about Demarchelier on YouTube where most of the models spoke of him in glowing terms... indicating either some manifestation of Stockholm syndrome, or these girls being afraid to bite the hand that feeds them:

I haven't watched the entire thing yet, but it seems to paint the photographer in glowing terms- an homage of sorts. However some other fairly well known models are telling a different story about DeMarchelier- alleging sexual improprieties including making them grab their own crotches, fondling their breasts and making improper suggestions- basically sexual harassment. These models include Cameron Russell, Anna Wintour and six others who have filed complaints which Demarchelier naturally categorically denies. It's starting to look like Demarchelier is France's answer to Terry Richardson who has been banned from almost every fashion magazine in the business. It appears that the fashion industry has its own seedy underbelly. The appalling behavior of Terry Richardson is well documented. Epstein's relationship to Les Wexner who owns L Brands in addition to Victoria's Secret casts an unfavorable light on the whole company. It appears that Epstein, his friend model "recruiter" Jean Luc Brunel, his assistant Ghislaine Maxwell and others may have been using VS and modeling agencies as a front for trafficking young women for sex.

Demarchelier and his proximity to beautiful models would be a perfect target for an Epstein honey trap. There are already allegations of Epstein using promises of VS contracts to lure young women (see link below). And then there's this photo...

Meme by me @richq11: courtesy imgflip.com

I can't say for certain that he's one of the men in the picture, but it warrants further investigation- all a part of the work in progress. If so, why would he be frolicing with Bill Clinton at an exclusive Dominican Republic resort? Unless they're all part of the same "club." Also, who took the picture? Many people are already aware of the seedy underbelly of Hollywood, the casting couches and worse. People like Harvey Weinstein (another friend of Bill & Hill) have been exploiting young and upcoming actresses for decades with the complicity of the industry. Given its close ties to Hollywood and the cult of celebrity should the modeling industry be any different.

We tend to look at the Epstein saga almost from within a box- the "Devil of Little St. James" he's been called. But Epstein's career didn't start or end with his "Pedo Island." Epstein was active during the Bosnian Conflict smuggling young women out of the area along with DynCorp and the UN "Humanitarian Effort." I believe that once more information begins to trickle out many in the modeling industry will be exposed for what they really are... sex traffickers for the rich and powerful. This is only the beginning of a very deep dive. I'll keep you posted as more comes out.

It is extraordinarily important to drive home to people who are in danger of neglecting that Epstein's murder reveals his position has been filled that the horrific crimes he was committing are still being committed - just by others. I note that is your intention in this investigation, and I could not more strongly commend you for it. Your diligence and endurance is revealed by your willingness to view the scantily clad beautiful women strutting across runways for hundreds of hours. Such a sacrifice is rarely required of men today, and you must be acknowledged for rising to the occasion.

By The Way Jeffrey Epstein did not Kill Himself, Paper Sheets Really ?