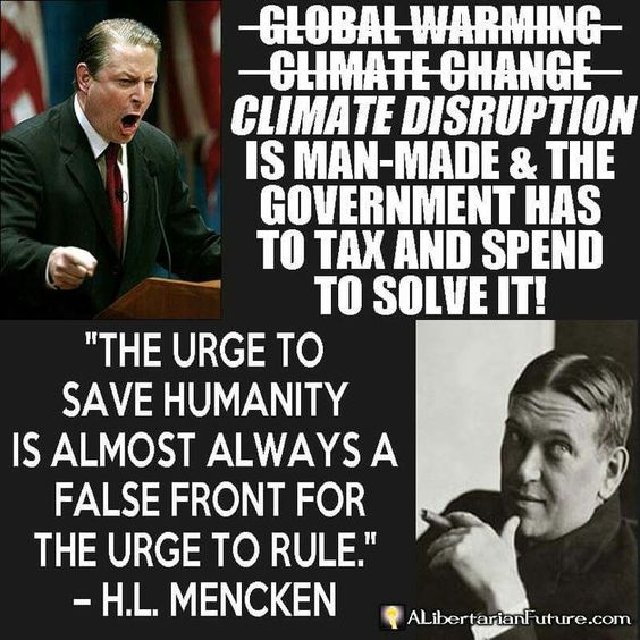 There are some problems that money can't solve, but that will never stop hucksters from bilking the public... Climate Change is one of those "problems," devised to create a climate of hysteria through which the globalist elites can amass more power and money. The biggest problem inherent in climate change "science" is that it's predicated on computer models- and computer models are only as good as the data fed into them. When the data has an agenda behind it the results are questionable at best. This is called "political science" where grant money depends on having the "science" prove a predetermined outcome. When meteorologists can't predict the weather a week ahead of time, how are we to believe that climate "scientists" can predict it years or even decades in advance... and name the sources?

Whenever anybody tells you that "the science is settled" it should raise a red flag. Science is never settled, that's why it's science. The climate models are wrong because the data has been manipulated. " The Daily Mail reports that climate scientists at the National Oceanic and Atmospheric Administration to make it look like the rate of global warming is speeding up after 2000."

Climate fanatics love to throw around all sorts of numbers and “data” suggesting that the Earth really is undergoing an all-encompassing state of warming because heat records around the world are supposedly being broken all the time. But none of the math these lunatics present ever actually adds up, it turns out. You see, the mathematical equations that these “authorities” are presenting as “evidence” that the Earth is warming are a mismatch compared to the past 140 years of available data on the weather and climate.

"Experts" have been guessing about future climate irregularities for years... here are a few predictions:

Things really heated up (no pun intended) when David Rockefeller, Aurelio Peccei and Alexander King  established the Club of Rome in 1968. The purpose of the Club was to create a state of panic about the environment over the threat of "global warming" that would allow the globalist elites to garner more money and influence (power)... and to get rid of some of those pesky, unwanted "brown people" (their words) in the bargain. Here are some headlines subsequent to the founding of the Club of Rome (their influence on the media is profound):

When legitimate science proved the global warming model to be incorrect, they just changed tack and renamed it "climate change," an ambiguous term that can mean almost anything... and now it's grown into a religion that calls for "heretics" (deniers) to be punished. The patron saint of this movement is St. Greta of Thunberg, an emotionally disturbed (not to mention cynical) teenager rather than an established scientist. In other words, Al Gore 2.0. Don't let the innocent face fool you, there's a lot more behind Greta Inc. than meets the eye.

But none of this has anything to do with climate change in any real sense- not from a scientific perspective at least. This (the climate change movement) is just a bunch of politicos doing what they do best...  using fear to bilk the public out of money and taking power in doing so. Greta is just a front, one of the useful idiots you hear about.

Climate change has been going on for as long as the planet Earth has existed... and humans have very little if anything to do with it. The real danger lies in climate change fanatics meddling with what's been going on since the beginning of time. God designed things so they they would take care of themselves... as a very wise man once told me: "There's a God, and you ain't him." By God I'm not speaking in any religious context, only as the intelligence that designed the universe. One look at the intricacy of a strand of DNA will tell even the biggest skeptic that this didn't happen by accident.

The Earth has gone through warming and cooling periods throughout history (and before).

The biggest contributing factor in climate change is sun spots regardless of back peddling by some prominent scientific journals such as Scientific American who posits:

“[V]ariations in solar energy output have far more effect on Earth’s climate than soccer moms driving SUVs,” Southwestern Law School professor Joerg Knipprath, writes in his ‘Token Conservative’ blog. “A rational thinker would understand that, especially if he or she has some understanding of the limits of human influence. But the global warming boosters have this unbounded hubris that it is humans who control nature, and that human activity can terminally despoil the planet as well as cause its salvation.”  Many climate scientists agree that sunspots and solar wind could be playing a role in climate change, but the vast majority view it as very minimal and attribute Earth’s warming primarily to emissions from industrial activity—and they have thousands of peer-reviewed studies available to back up that claim.

This would explain the "Medieval warm period"... of wait, there was no industrialization until the late 18th century. More "rational minds" in fact agree that variations in the Earth's temperature can be tied to sun spot activity.

According to current theory, sunspots occur in pairs as magnetic disturbances in the convective plasma near the Sun's surface. Magnetic field lines emerge from one sunspot and re-enter at the other spot. Also, there are more sunspots during periods of increased magnetic activity. At that time more highly charged particles are emitted from the solar surface, and the Sun emits more UV and visible radiation. Direct measurements are uncertain, but estimates are that the Sun's radiant energy varies by up to 0.2% between the extremes of a sunspot cycle. Polar auroras are magnificent in years with numerous sunspots, and the �aurora activity� (AA) index varies in phase with the number of sunspots. Auroras are faint and rare when the Sun is magnetically quiescent, as during the Maunder minimum.The periodicity of the sunspot number, and hence that of the circulation in the solar plasma, relates to the rotation of the Sun about the centre of gravity of whole solar system, taking 11.1 years on average. Sometimes the Sun is up to a million kilometres from that centre, and sometimes it more or less coincides, leading to different conditions of turbulence within the photosphere. The transition from one condition to the other affects the number of sunspots.

According to the same article:

Incidentally, the Sporer, Maunder, and Dalton minima coincide with the colder periods of the Little Ice Age, which lasted from about 1450 to 1820. More recently it was discovered that the sunspot number during 1861-1989 shows a remarkable parallelism with the simultaneous variation in northern hemisphere mean temperatures (2). There is an even better correlation with the length of the solar cycle, between years of the highest numbers of sunspots. For example, the temperature anomaly was - 0.4 K in 1890 when the cycle was 11.7 years, but + 0.25 K in 1989 when the cycle was 9.8 years. Some critics of the theory of man-induced global warming have seized on this discovery to criticize the greenhouse gas theory.

Now the geniuses in Washington DC want to spray aerosols into the atmosphere to combat climate change... this is what happens when you let the lunatics run the asylum.

An international panel of climate scientists is reportedly calling on the nations of the world to take “unprecedented” new steps to address man-made global warming, including by blanketing the skies in chemical aerosols. Better known among truth-seekers as “chemtrails,” aerosol spraying purportedly has the potential to create a massive “heat shield” to protect the globe from the sun’s ultraviolet rays, which in turn will help to keep it “cool,” according to the Intergovernmental Panel on Climate Change (IPCC).

Two wrongs don’t make a right, but that seems to be the approach of climate fanatics who insist upon exploiting our planet for political purposes. A more rational solution to man-made climate change, assuming it even exists, would seem to be to just leave things alone – but that is not the approach being taken within the climate community. Their plan is to send jets 70,000 feet in the air to blast out sulfur clouds that NBC News explains will “bleach blue skies a lighter color and making sunsets more vivid, while shielding Earth from some of the sun’s rays.”

This is to act as an aerosol "umbrella" that would "protect us from the Sun's damaging rays (that only seem to have become an issue in the past 10 or so years).

Which brings us to CO2 emissions. Carbon Dioxide, described by Wikipedia, is: " Carbon dioxide (CO
2) is an important trace gas in Earth's atmosphere. It is an integral part of the carbon cycle, a biogeochemical cycle in which carbon is exchanged between the Earth's oceans, soil, rocks and the biosphere." Then why, one may reasonably ask, are the climate fanatics trying to get rid of it? CO2 is good- plants depend on it for their survival. The climate change advocates argue that CO2 causes the Earth's temperature to rise, however, this is incorrect- it's warmer temps that cause Co2 levels to rise because of the abundance of plant life during warm periods. This in turn causes more animal life, so everything is good, right? Well not if you have a political agenda at stake and you can't keep changing your narrative without the rubes catching on.

Nobody is arguing that climate doesn't change, only how it occurs. Fanatics such as Alexandria Ocasio-Cortez would have us living in a stone age environment... and the only thing I can positively say is that fanaticism has never produced positive results. It's critical that we conserve the planet... after all, we all live here. What we don't need are draconian measures such as seeding the atmosphere with sulphur and dangerous metals like aluminum, cobalt and others. This is a recipe for disaster- it's also what happens when you listen to fanatics. What I'm arguing here is against corruption and fanaticism, not against taking care of the planet. The Bible says that God created everything and appointed us stewards and whether you believe in God or not, you have to admit we've done a piss-poor job. Weather happens and the more we try to about it, the worse we make things. There are real problems with the environment that need to be addressed- pollution for one. While China and India are polluting the atmosphere we hear crickets from St. Greta and her handlers. Why? Because it's easier to guilt western civilization out of their money. Japan is about to release over a million gallons of radioactive water from Fukushima into the Pacific... where are the activists? Climate change is real... the climate change movement is a fraud.

And you notice the only ones getting taxed are Americans and Europeans and not China and INdia the biggest polluters!

Great stuff @richq11! I especially like the old headlines; really helps to frame how long this con has been running.

Don't forget to drop a link for this over in the upmewhale post. I'll upvote the comment with a few accounts to help it towards the top :-)

Great article Rich! The more we can confront their ceaseless propaganda about climate change, the better! I like those images you pulled; they're a fantastic example of how easily they think we forget.

Thanks... I was also trying to show how the "experts" have been wrong pretty much the whole time they've been guessing.

Recruiting a noxious teen to promote a scam depicts the merciless nature of the cabal..

Yuo... taking advantage of an emotionally disturbed kid is unconscionable- but on the other hand, she's making millions. Like the old saying goes: anything for a buck!