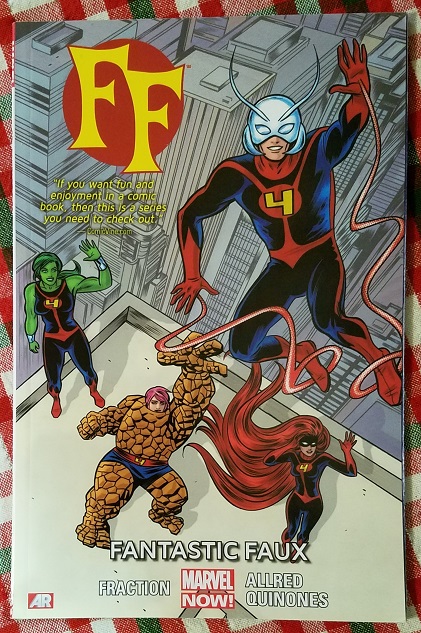 Thank Bob for books. When things are tough---when I’m freaked out by the weird, crazy, stressful events happening all around me in the “REAL WORLD,” humans have figured out a way to share their ideas with others through writing, and I can take comfort in the words and ideas of others. We human-folk have discovered the ability to ABSTRACT ideas into little visual signs---letters and words---and most of the time these little markers reference SOUNDS as well as ideas (called “phonemes”), which we “hear” in our heads when we scan them with our eyes (or fingers, if we’re blind…) At some point, thousands of years ago, people realized that you could MIX these idea/slash/sound codes with actual visual representations of things…aka PICTURES…to get a composite structure that we, today, call COMICS! (See Scott McCloud’s Understanding Comics for more on this development.) And when I’m freaked out, I like to read comics, in particular, to help me get through my troubles. While my wife was having surgery a little over a week ago, along with doing some drawing to help the time pass, I also started reading Matt Fraction and Mike Allred’s FF – Fantastic Faux collection. I have since finished reading the book, TWICE, and I’m ready to tell you folks all about it! (How was THAT for a walk around the park!!!)

[This is a photograph that I took of the actual book that I read. The image is included for review purposes only!]

This collection is a continuation of the story started in the collection Fantastic Four – New Departure, New Arrivals, which I reviewed a few weeks ago. That previous collection had a few issues of Fantastic Four (the 2012 reboot) intertwined with the first three issues of FF, a spin-off series that follows the adventures of a group of “replacement” heroes hired to take the place of the actual Fantastic Four, who leave the planet in search of a medical treatment for whatever degenerative disorder is eating away at Mr. Fantastic. The outer space adventures of the “true” Fantastic Four continued to be chronicled in Matt Fraction and Mark Bagley’s Fantastic Four series, while the Earthly adventures of the “FF” are covered in Matt Fraction and Michael Allred’s FF comics. The heroes whose stories are featured in FF include Ant-Man, She-Hulk, Medusa, and Ms. Thing, along with more than a dozen young beings, some human and some not, all with strange powers, called the “Future Foundation,” who live together at the Fantastic Four’s gigantic Baxter Building…for some reason…as if it were a school for gifted youngsters or something...

SO…what actually happens in this book? Without blowing too many of the exciting twists and turns, let’s cover the basics. Towards the end of New Departure, New Arrivals, a battered and half-crazed individual comes through a time/space portal and lands on the top of the Baxter Building, claiming to be Johnny Storm, the Human Torch. He says that the Fantastic Four are dead---killed sometime in the near future by Dr. Doom, Annihilus, and Kang the Conqueror. He barely survived the encounter and returned to Earth in order to warn the FF of what is coming.

There is some debate within the FF as to whether or not this rambling, clearly disturbed individual is the ACTUAL Johnny Storm---but while this debate is raging, the Torch “gets away” and tries to burn down New York…because he is clearly disturbed and deranged. Meanwhile, She-Hulk goes on a date; a group of mole-kids has a crush on her and tries to sabotage the date; Ms. Thing is hazed by a group of young hackers---who think she is a terrible substitute for Ben Grimm; Ant-Man (aka Scott Lang) worries that he’s going to get all the kids in the Future Foundation killed; Alex Powers (one of the Future Foundation youths, and a character introduced in the fun, old, ‘80s comic, Power Pack, which I used to read when I was a teen) decides to visit Dr. Doom (which goes pretty badly); another one of the kids in the Future Foundation is visited by his evil, psychotic father (who, naturally, tries to kill everyone); AND one of the mole-kids decides that he is no longer comfortable being a boy and decides to identify as a girl, instead. I’m honestly very pleased by how Fraction and Allred deal with this final plot issue, as it’s covered in a very sweet, very supportive way. Good job there, fellas!

Despite how short this book is---it only contains five individual issues (FF 4 through 8)---there is a LOT of ground covered. AND despite the fast pace, Allred’s panel structures and pacing are excellent and easy to read. I LIKE this book. It’s fun, it’s weird, and there is a lot of both heart AND humor, which I enjoy in a comic. In addition, the story moves right along, bouncing quickly between ACTION scenes, humor, and (mostly believable) emotional sequences. Allred (who I’ve mentioned nearly a dozen times is one of my favorite artists) tends to bring an up-beat, slightly psychedelic, slightly nostalgic feel to the books he illustrates, which I really enjoy. Remember that I grew up reading ‘60’s and ‘70’s comics---cheap stuff that you could buy for a quarter at a garage sale or find in a thrift store or get from an aunt or uncle who had cleaned out their attic, so to me “COMICS” has always conjured adjectives, like "old," "cheesy," and "goofy,"…and Allred’s art brings up those same feelings of FUN and YOUTH and EXCITEMENT that comic books inspired in me when I was a little kid in the 1970’s and ‘80’s. I’m perfectly willing to admit that this is a SUBJECTIVE, NOSTALGIC feeling, and that not everyone who reads an Allred book will necessarily have the same reactions that I do... But come on! Just look at that cover image up above! It’s silly and funny and weird and quirky… What else do you WANT in a goofy superhero comic?

That being said, I do have a couple of…I hate to say "complaints," but that's kind of what they are… FIRST, there are a LOT of characters in this book. Not only do we have the FF and the Future Foundation kids to keep straight, but also the Yancy Street Gang (the hackers who spend a bunch of time picking on Ms. Thing), the Inhumans (who have a long and complicated history---which I probably know better than some because I enjoyed reading the Inhumans stories when I was a kid, and I even reviewed an Inhumans’ collection about a year ago), and several OTHER characters---both friendly and adversarial. Fraction and Allred also like to include Easter Eggs or call-backs from Marvel Comic’s past in just about every page of this book---and honestly it can be a bit overwhelming trying to keep up! The story is still very fun, and the art is brilliant, as always (even the one issue that was guest drawn by Joe Quinones, issue #5, which is similar enough to Allred’s style that most folks probably won’t notice the difference), but there are a TON of names and storylines to try to keep untangled in this book. And even for someone who has read comics since the 1970s, and who read a lot of MARVEL comics, I didn’t really know most of these characters. (I recognize some from Uncanny X-Men and New Mutants, like Artie and Leech, a few from reading Inhumans stories in various comics, Alex Powers from Power Pack, and a few just from having general knowledge of Marvel books, like She-Hulk---but JEEZE! I feel sorry for someone trying to read this book if they are just trying to get into comics. It would probably be a bit too much.

My SECOND complaint is less serious, but still a bit of something, and that's the PACE of this book. I don’t know if this series was INTENDED to only be sixteen issues long, so Fraction and Allred knew from the get-go that the story was going to be limited, or if they were just barreling ahead all guns blazing because that's how they wanted to tell the story---but for whatever the reason, this shit moves REALLY QUICKLY! SO MUCH HAPPENS in a single issue that it can be a bit hard to follow. Hell, I’ve read this collection three times now, once a few years ago and TWICE for this review, and it still feels like I’m out of breath each time I close the cover. Part of the problem, if wall-to-wall action and adventure can be called a problem, might be a continuation of my first complaint---there are just so many characters whose stories need to be covered that it FEELS like the book is rushed---or maybe I’m just getting old.

Maybe I want a breather every now and then. Maybe---because the WORLD is spinning so rapidly and apparently out of control---it just FELT like the book went by too quickly. I don’t know. But let’s just say, TO ME, the book feels RUSHED, like the creators have a particular destination in mind that they NEED to reach, and they don’t really have enough time to wander around and see too many of the sights (or tourist traps) along the way. (Or perhaps this feeling, that the story is too COMPRESSED, might just be me…)

All that stuff said, the book is really fun. I still love Allred’s artwork, and I think Fraction tells a good tale---in this case about twelve good tales. The book doesn’t seem to have any Comics Code Authority stickers on it, but it didn’t seem too nasty for kids to read, either, in my opinion. (It’s rated “T+” by Marvel.) Maybe some innuendo here and there, certainly a bit of violence, but no real gore (although the crazy Johnny Storm IS missing one of his eyes), and I don’t remember any serious cussing going on, either. This is just a good, fun, funny, sometimes thoughtful, sometimes just weird comic. Not my absolute favorite book by Fraction or Allred, but certainly better than MOST of the junk clogging newsstands and comic shelves over the last ten years or so. Plus, the Ant-Man character DOES come across as a very funny, witty guy, similar to how Paul Rudd plays the character in the Marvel films---even though this story came out at least two years before the first Ant-Man movie!

Overall, I’m going to give this one a “soft” recommend. I enjoyed it and found it entertaining, even after multiple readings, but it probably wouldn’t be a great starting point for readers who aren’t already soaked in Marvel Comic's lore. There are just too many characters and old plot-lines to keep straight for a newbie to be able to really GET the book, I'd wager, though for some folks the FUN and weirdness of the story might be enough to pull them through the not-knowing…