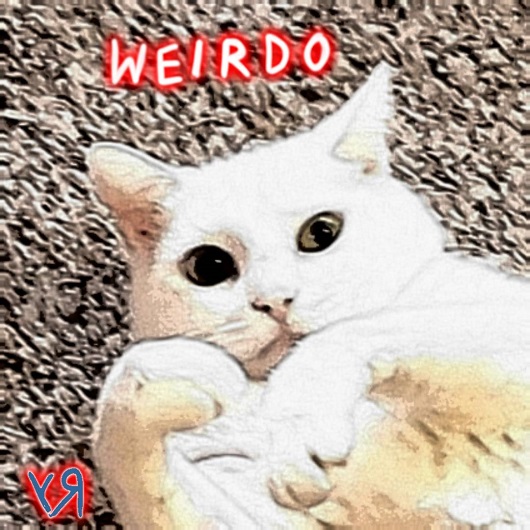 That picture up there is a photo of our freaky, scaredy-cat, BOO. He was looking at me rather skeptically from the floor on the other side of the coffee table (I do a lot of my writing and drawing sitting on the floor at the coffee table), so I got my revenge by snapping this pic and tweaking it to make him look as goofy as possible (mostly, by adding the word, “Weirdo” above his head! GOT HIM! HA!!!)

Today is the final day of my three days off, and I’ve spent most of it watching YooToob videos (primarily about comics, as I’ve recently discovered the show, ComicTropes, and I’m enjoying that), and I’ve been listening to a couple new MonsterTalk podcast episodes, although the second new M.T. episode is ACTUALLY the pilot for a new podcast, starring MonsterTalk cohost, Blake Smith, and archaeologist and author, Jeb Card, called In reSearch Of, which was a lot of fun. If you’re interested in things like aliens, crypto-zoology, or supernatural concepts, but looked at from a SKEPTICAL perspective, both MonsterTalk and In reSearch Of are wonderful, (if this inaugural episode is any indication of how the rest of the program is going to be…)

On Sunday, the whole family went to Hood River, Oregon, for an adventure, which I’m still planning to write a post about---but going through all the photos is time consuming! Here’s a little preview of some of those pictures…

Meanwhile, I’ve been doing all kinds of lovely domestic stuff: shopping for supplies, unclogging a bathroom sink, laundry, taking out the garbage, babysitting the grandkid… Normal human things. I don’t mind doing that stuff, actually. It makes me feel cool when I write a big long list of things to do, and then, as I finish them, I get to check mark all those boxes! It’s weird and simple, but an accomplishment is an accomplishment. And I HAVE finished some stuff lately… I FINALLY got a new Read a Damn Book review done last night, which I’m pleased with---but I’m still behind in my crypto-art creation, still not done with my Spook Show reviews, I’ve got ideas for my Story Time segment, but I haven’t had the time to actually WRITE them… (And all of these unfinished things are, certainly, my fault. I COULD have found the time to plink away at them, instead of watching videos---or sleeping…)

One of the things that Mariah (aka “The Boss”) wanted me to do while I was off was to get some new Halloween lights for the front-room window, and I DID find some lights that I thought might look pretty cool. I scoured our local department store (where I thought I remembered finding exciting stuff in the past), but there wasn’t much there to choose from… In fact, as of YESTERDAY (October 7th---my wife’s birthday!!!), the store had more CHRISTMAS lights for sale than Halloween stuff. I mean, there were two full AISLES full of Christmas lights, and only two SHELVES for Halloween lights! (I get it. Christmas is the bigger holiday, but for badness sake! It’s still THREE WEEKS BEFORE HALLOWEEN! Can’t we at least enjoy the one SPOOKY holiday we get in the year before switching the focus to a holiday that’s still TWO MORE months away?!? Jeebus!) Another thing that disappointed me was the lack of any really interesting NOVELTY lights (that weren’t close to twenty bucks for a six foot strand) to go with the two strands of twinkly orange / purple / green lights I had decided to buy. Here’s what THOSE looked like once I got them up!

And, since I couldn’t find any decorations that I wanted to spend money on, I just bought some kid’s neon markers, a few Sharpies, and some tracing paper, and I decided to draw my OWN decorations… (The reason I’m drawing them on tracing paper is so that, when I tape the pictures into the window, people will still be able to see the images from the outside of the house almost as well as we can see them on the inside!) Here’s the only one I’ve finished so far. (It looks like a kindergartener drew it, but I’m happy with it, and both Mariah and Ellie---the younger daughter---said they thought it was cool.)

After I took this picture (confession, I did mess with the colors just a bit, and did that shadowy circle filter to make it look cooler, but that’s who I am), I cut the image out… Now I just need to find some tape and to put the dang thing in the window. And THEN, I’m going to draw some more monsters and stuff… Ellie suggested a ghost and a skull. I figure I need to draw a big eyeball and a bat or two… Coming up with monsters to draw has never been that difficult for me. (If you are a regular spectator of this blog, you’ll already know that!)

Just for fun, here’s a little drawing I doodled in my notebook a few days ago. I like the weird facial expressions and the rough, junky quality… I’m into that kind of stuff. For some reason, I added color to the drawing with Paint 3D, a free program that came with my laptop.

Anything else??? Oh, yeah! I finally hit 1,000 Steem Power after powering up this afternoon. That’s something!

Ha! And I just realized, looking at that last image, that I still have my OLD blog listed as my web address on my profile! Shoot… I need to change that! I still like the old site, and there is still a LOT of material there that I’m really proud of, but I’ve stopped posting new work to the site---mostly because it’s FULL!!! I ran out of my memory allotment, and I’m not paying for a pro account (again) because it just wasn’t worth the money!

Okay. I THINK I’ve rambled enough… I’m still reading a bunch of junk, and hopefully I won’t take three or four weeks to get to my next review, this time! (I’m almost finished with two different books…so… Let’s see if I can manage my time a bit better and get those suckers reviewed in a timely manner! Feeling overwhelmed is just a state of mind! With the right LIST, even the most complicated schedule is manageable!!!) Right-O! I’m off to tend to STUFF!!! Keep on reading, writing, drawing, and making things! AND make sure you enjoy your life (because nobody else is going to enjoy it for you!!!!)

You put so much work into your posts, so have an upvote :)

Thanks! The support is definitely appreciated!!!