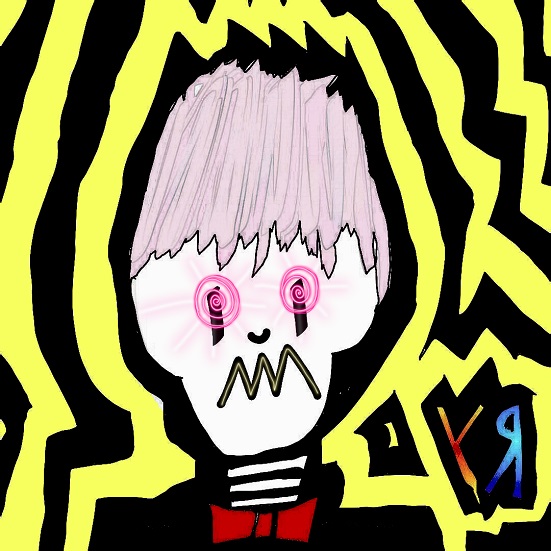 Hey folks, I’m tired as a MO-FO! It’s been a busy, crazy, stressful, and intense week, so far, and it’s only Wednesday! Babysitting the grandkid, the wife’s surgery, helping the younger daughter move, getting ready for X-mas, working on a music project for my uncle's birthday, AND trying to keep up with a daily blog---all that mental work starts to take a toll… But so far, I haven’t completely cracked, so…BONUS!!!

(The unfine print: These works are being released as single, unique editions of ONE each, and they will NEVER be reprinted. [First come, first served, and then GONE!] The works are tokenized utilizing the ETHEREUM blockchain by the great people at MakersPlace! [Check out their exciting, artist-centered gallery HERE!] To view my new works in their natural habitat, check out my MakersPlace store / gallery, where I have several dozen verifiably rare digital assets for you to gawk at or even collect! [My works are priced so that normal, non-rich folks who are interested in getting into the crypto-art game can START their collections!] Below my two new pieces, I’m going to showcase a number of my recent works that have already been purchased, partially because I don’t get much of chance to BRAG---I rarely leave the house, so I don’t encounter many people who would be interested in this weird stuff!!!---and partially because UNIQUE items that sell are no longer visible in my gallery! So if you want to see what’s GONE, this will be your chance! Okay? We cool? Then let’s move on to the new ones!)

He was perfectly coiffed, just messy enough to be believable, but clearly still stylish. His only problem was the bow-tie, which was having trouble staying put, since he didn't have any skin or flesh for it to hang on. It just kept slipping down to his collar bones.

But despite this slight flaw, or perhaps because of it (no-one should be thought of as perfect), the overall appearance couldn't have gone better.

The hypnotic implants in his empty eye-sockets kicked on just after the second commercial break. The entire room fell silent, and living-rooms across the nation became OPEN to suggestion. He did his best...despite the obvious contradiction in this action...to make a difference. But perhaps the ends justified the means... (Even if the phrase, "Slavery is Freedom" kept running through his empty skull.)

"Okay people," he said, once he was certain the tech had worked, "I want you to listen and do what I say! READ A DAMN BOOK! I don't care if it's fiction or non-fiction, just exercise your brains' capacity to IMAGINE based on abstract input! IMPROVE YOUR ABILITY TO REASON AND EMPATHIZE! Reading is KEY!!!"

"Next, take a class or find a video or something that teaches you CRITICAL THINKING SKILLS! There is a TRUTH that's out there, a REAL WORLD, which is being destroyed---RIGHT NOW---and although you will only have a partial data-set with which to judge TRUTH from LIES, you have to learn how to EVALUATE INFORMATION for plausibility and SOURCES for reliability. And, MY FINAL COMMAND, YOU HAVE TO LEARN TO THINK FOR YOURSELVES!!!! Don't just fall in line... And DAMMIT!!! Don't make me come back and do this again..."

He stared meaningfully into the camera for a few more seconds, then felt the diodes in his skull switch from ACTIVE to OFF, and the room began to fill will motion and noise again. Households came back to life, and nobody was aware of what had happened.

The interview went smoothly. People laughed, the host was generous, and when his wig started to slip off the top of his noggin, everyone gasped, but he stood up, bowed deeply to the crowd, and let the hair-piece fall to the floor, instigating the biggest laugh of the night and then a round of applause.

After the show, Mod walked to his car, pressed a few hidden buttons under the dash, and drove through the strange, warbling dimensional rift that had suddenly appeared in the alley, and he was nearly instantaneously transported back to the Afterworld, where he belonged.

And, in the coming weeks, things got better. Not instantly, but steadily...

The ends don't always justify the means---but, as Plato suggested, sometimes the masses are blinded and believe in shadows... When that happens, it's up to the Shadows to guide them to the light!

[P.S. - This is a satirical, simplified, fantasy story, in which I am sharing my wish that all of the societal division and belief in dubious "facts" that currently plague my country---perhaps the whole world, to some degree---could be corrected or even wiped away with a single, magical act. Unfortunately, I realize that isn't possible, that the situation is infinitely complex and may be irreparable---I still intend to TRY to improve the world in little ways in REAL LIFE, but I certainly WISH that we could instantly inspire folks to become more empathetic, more critical, and more independently minded with a single television stunt. It's fantasy, but as a writer / artist / creator, I get the luxury of indulging my fantasies. Whether you agree with my ideas of what would improve the world or not, I get to have my say through my art! So... That's what I do...]

[This is a digitally revised version of a piece I posted a few days ago (see it HERE) when my wife had surgery. I was pretty happy with what I wrote about the piece that day, so I just shared my written statement from my Steemit post as the written element of this piece, plus a small note mentioning that the art was a takeoff of the image I posted on Steemit. This is a dark piece for me, but I’m still happy with it---even if it’s messy and kind of ugly and scary. Those adjectives accurately reflect how I felt while I was creating the piece, so…cool.]

Here are the rare, digital artworks that I’ve sold in the last few months. Some of these (I’ll add a note saying how many are in the addition) were single editions of ONE, and they are now gone and no longer viewable on my MakersPlace store / gallery. To see all the fun, weird, creepy, humorous, punky, junky art that I have on display, make sure to click the link and visit my space! There’s a TON of stuff to look at (and read), even if you aren’t interested in buying. I try to have fun with my art and stories, and HOPEFULLY, that comes through! (Let me know if you agree or disagree in the comments below!)

And that’s just the works that have sold since September! There are a couple more that are gone forever and a few that are quite limited in supply, at this point, but the list was already getting pretty long, so…

Like I said, go ahead and check out my MakersPlace store / gallery, if for no other reason than morbid curiosity! (Can you believe people actually paid ETH for these things??? What other weird junk is sitting there? You want to know… I KNOW you do!)

So that’s today’s crypto-art post. Hopefully, it amused you a bit! My goal for all of this stuff is to make a handful of people smile! If I did that, let me know below. (And I have a pretty thick skin, so whether you’re laughing with me or at me, I’m happy you’re amused!) Okay! Time to go work on my Christmas wrapping! We’ll see ya tomorrow!!!