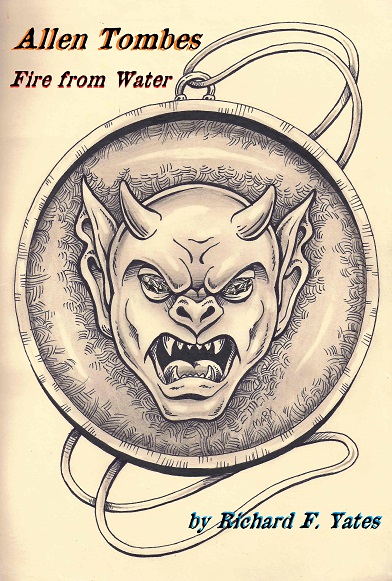 Holy SMURF! After WAAAAAY too much time spent procrastinating, I finally contacted an artist friend of mine, who agreed to draw me a cover for my book, and he very quickly produced a brilliant, creepy image for me…like in just a couple of days!!! Unfortunately, I had to soil his image by putting some words on it, but that’s because commercialism is a harsh mistress… Without further ado, here is the cover for Allen Tombes – Fire from Water!

I am extremely grateful to Mr. Mark Counts for producing this fantastic cover image for me, especially because it was the only thing holding the project back. I am also an artist, but I’m more of a “punk / DADA / stick figures and snakes” kind of artist…perhaps cartoonist would be more accurate, whereas Mr. Counts can create images that look PROFESSIONAL! And I wanted the cover for this book to more accurately reflect the mood of the interior. While most of what I write is silly and snarky and nonsensical, THIS book is actually more of a “REAL,” honest to Bob, straight-forward fantasy tale. AND, for those who might be wondering, an eBook version of the novella IS available for purchase RIGHT NOW on Amazon for only THREE BUCKS!!! [https://www.amazon.com/dp/B082PP5WW4]

I’ve also submitted a paperback version, but that’s not quite ready, yet. Apparently, it takes the POWERS THAT BE longer to okay paper than it does digital… (I’ll post an update when the paperback version is ready for public consumption!)

“So…What’s this book about?” I hear you wondering… Why don’t I just give you a couple of snippets from the actual story… Let’s start with chapter one:

Allen Tombes was ten when his older brother, Chris, was taken. Chris was sixteen then, competitive, and kind of macho. He was a superstar athlete—football, wrestling, track—and too smart for his own good. He fought with their Dad, sometimes, mostly about coming home late, drunk, while driving their Dad’s Porsche, that sort of thing, but Allen thought he was a good brother. And one morning Allen woke up and Chris was gone.

The cops said he’d probably run away. His window was open, and it didn’t look, to them, like any “foul play” had taken place, but Chris hadn’t taken any of his things with him. Not even his shoes.

The night he was taken, and Allen knew he had been taken, Allen had heard voices coming through the wall from Chris’s room. Maybe not voices, exactly, more like whispering or hissing, and one sound that was so low and terrifying that it sounded more like the Earth moving than a voice, though Allen was certain that it had been a voice.

Spoooky, right? Some THING took his brother, which is awful, but it gets worse for poor Allen, as we see in chapter four, when he’s wakened in the middle of the night by something opening his window, and the strange gargoyle necklace that his friend, Chaz, had given him that day, starts to glow…

The room was very dark, but a reddish glow was beginning to spread up the wall and toward the ceiling above his bed. He sat up and as he did, the shadows in the room shifted. His chest was very warm, and he realized that both the heat and the red light were coming from the charm around his neck. Frightened, he grabbed the leather string and started to pull.

“Don’t take it off,” a low, gruff voice said from the shadows next to the open window.

Allen felt himself go electric, his fingers and hands suddenly frozen. He knew that voice, although he hadn’t heard it for five years.

“Chris?” Allen said with a swallow.

“Shhhhh… They’re coming. Keep still and leave the amulet on. It’ll help shield you from their spells. I won’t let them get close enough to use their claws,” the voice said.

Allen couldn’t breathe. The charm burned his chest, but the voice! It was Chris, here, in his bedroom!

Allen noticed something at the window, like black ink moving through water. A shadowy arm swam through the air, wrapped around the windowsill, then a shoulder followed, and then teeth and eyes flowed into the room. It moved like smoke, a living shadow that maybe had once been a human, but had forgotten how flesh and blood was supposed to act. It swirled and sloshed through the window and into his room.

And THAT is what I’m talking about! Normally, what I write is goofy and has a joke wrapped inside it, like a jerk-in-the-box just waiting to spring out and make you groan, but I decided to write a fairly serious urban fantasy story this time, and I’m happy with the result. Here’s the blurb I wrote describing the book:

Allen Tombes still has nightmares about the night his brother, Chris, disappeared. The police say he ran away, but Allen KNOWS he was taken---because Allen heard whatever it was that took him hissing and growling through the wall. Five years later, Allen is wakened in the middle of the night by the sounds of something opening his window---something he can't see. But he hears it hissing---and he also hears his brother's voice telling him, from the darkness, not to move...

Allen and his sister, Rose, find themselves under attack by terrifying phantom creatures and a wicked witch, all bent on destroying their family, but the best weapon they have to fight the creatures just might prove too powerful for Allen to wield, so powerful, in fact, that it could destroy everyone and everything that they love.

Alright, I’ve bent your ear (or, I guess, your eyeballs) enough. You’re either into this type of story or you ain’t, and I’ve given you enough of an idea of what you’ll find inside the covers of this book for you to decide which direction you’re leaning! Feel free contact me if you have any questions!

Super-thanks, again, to Mark Counts for creating the cool cover art for me (it’s the amulet that the main character is wearing in the sequence I shared above), and thanks to the folks who read sections of the book and helped with editorial and story decisions: Kandy Roberston, Richard O’Brien, Josh Erdahl, Shane Grove, and (of course) Mariah “The Boss of Me” Yates (who puts up with a LOT of strange stuff from her weirdo husband!!!) I’ve got some contributor copies to order for these folks, once the paperback editions are ready! I’ll let you people know when those are up and running, in case you prefer to read on paper! (That’s my preferred mode. That and, naturally, Depeche… Sorry… Depeche Mode, the band. You remember? Old guy music reference…)

Anyway, thanks for stopping by! One book down (remember that list I posted about two weeks ago???), and only seven more to complete---plus that one new one I came up with while driving last night! So, only EIGHT more to go, and then I can rest---maybe take a day trip to the beach or something…

Congratulations! Your post has been selected as a daily Steemit truffle! It is listed on rank 15 of all contributions awarded today. You can find the TOP DAILY TRUFFLE PICKS HERE.