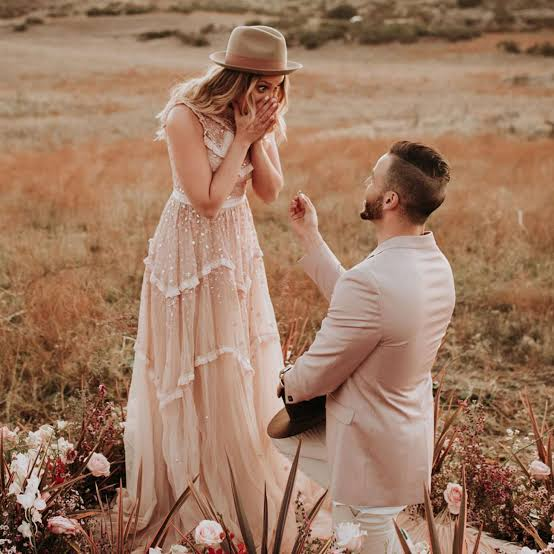 This is one of the best posts of this series. This is where most youths   find difficulty. If you will patiently and carefully read this post: You will know some of those things which you have not known. They will surely help you in life.

"Your words are a flashlight to light the path ahead of me, and keep me from stumbling; I have said it once, and I will say it again and again: I will obey wonderful laws of yours": (vv. 105, 106 LB.)

"Those who love your laws have great peace of heart and mind, and they do not stumble. (v.165LB.). “Nothing can make them fall" (KJV).

The word "engagement" is ^the official ceremonial approval or sanction by a man and a woman and the families of both parties." In the other words, "marriage engagement is the official agreement or acceptance of both intended partners after going through test of courtship".

That simply means, once an agreement is reached by the intended partners engagement has started.

The difference between courtship, dating and engagement are as follows:

1. Courtship tries to woo and win one's favor, acceptance and affection for marriage. But it does not offer or accept hands in marriage.

During courtship one is acquainted with likes and dislikes of each other before offering and accepting hands in marriage.

2. Dating aims at having a social engagement (i.e. appointment) with a person of the opposite sex.

Sometimes it has no intention of marriage like courtship.

Dating does not mean "going steady with a particular lady" unless when it is mixed with courtship.

Dating is just the normal movement of the youth with the opposite sex mostly in school.

3. Engagement is the official    ceremonial approval or sanction by both man and woman who had been going steady.

Their parents will know officially that they have offered and accepted their hands in marriage.

Engagement breaks the suspicions which had been created in the hearts of both parents.

The man and the girl can visit each other openly without fear of accusation.

Now we have seen the definition and the difference:  let us read Deut. 22:23-29 in a living Bible.

"If a girl who is engaged is seduced within the  walls  of a city,  both  she  and  the  man  who seduced her shall be taken outside the gates and stoned to death - the girl because she didn't scream for help, and the man because he has violated the virginity of another man's fiancée. In. this way you will reduce   crime among you. But if this deed takes place out in the country, Only the man shall die. The girl is as innocent as a murder victim: for it must be assumed that she screamed; but there was no one to hear and rescue her out in the field."

If a man rapes a girl who is not engaged; and is caught in the act, he must pay a fine to the girl's lather and marry her; he may never divorce her.”

This starts immediately a man proposes a lady. Immediately the girl or lady accepts it, engagement has started. Now, since the young man is not yet ready for marriage, he will agree with the lady to keep their proposal secret within themselves alone. Their parents had not known about it. Their pastor had no knowledge about their movement. At this time, they can move together, discuss on issues that are relevant and irrelevant. They use this as courtship but they have made the mistake of hastily offering of hands and acceptance. Had it been that the man keeps his intention intact as a secret within himself alone. He would not fall into secret engagement, since he is not ready yet. This kind of engagement can remain secret for a long or short time. No matter how secret you think, you have kept it. It is only secret to parents, pastors and the Church authorities. Among the girls and the young men of the same peer group: it is not secret.

The girl must whisper to her best friends for praises and prayer about the happy and good news. Her friends will in turn whisper to their own best friends. By so whispering it becomes a secret in the open (i.e. an open secret).

The man on the other hand, will whisper to his best friends for prayers, approval and criticism. His friends will in turn whisper to other friends of theirs.

Therefore, in the youth world, that is known as "open secret engagement”. It is very dangerous. The man may date you in that process. Perhaps, where both of you will alone stay. He will start to tease you around, romance and caress you. Even demand you to prove the love you claimed on him.

When that is done, it is always hard to say no because he has already given you every assurance of marriage. "There is an instinct or inner force which pushes one closer to each other immediately one accepts engagement", said Retired Rev. J. O. Uche.

Read this live story as an illustration. The principle actors are veiled, though painted with verbal pictures.

There was a good, strong brother in one of the Christian Churches in Nigeria. This brother offered his hand in marriage to one Christian girl. The beautiful sister accepted the offer. Both of them entered into secret engagement. Their parents did not know, neither did their pastor, nor the Church officials have any knowledge of their proposals. The youth world got the information through their intimate peer friends as written above. It began to rumor among the youths. Nobody was bold to ask since it was a rumor. Some other Christian brothers and sisters (outside the youth world) heard it. Nobody asked because there were no facts and evidences. One day one of the Church officials saw the sister being carried on a motorcycle by that some brother mentioned in the rumor. The Church officer, who saw them, called the sister on a private note and interrogated her with caution. The sister frowned   and   sharply   shunned   that   Church officer to mind his business. She added that she knew herself very well.

So, the Church had no base to interrogate them. They were left to appear on their true color.

According to the very sister in question, she said that one day, the brother took her to his own apartment. They were alone behind a closed curtain. They were discussing, romancing and caressing each other. They lost into lust. Both of them were aroused sexually until they could not hold themselves. "I did not know how that thing happened, we were just playing but I did not know that it will reach to such extent" - the girl lamented when queried by the Church authorities. Can you believe that, that so called brother wickedly dumped the girl to her shame?

Ladies and gentlemen! Secret engagement is very dangerous. The result is heartbreaking and disappointment.

I have always advised young single ladies that whenever any man asks for marriage, they should immediately inform their parents and pastors if their responses are positive.

Their parents (i.e. both spiritual and physical) will monitor their movements to avoid regrets. It is honorable and respectful to have the man and the lady coming boldly to their parents. You are hiding because your parents will question you when seen with that man or lady. You see, when you meet in hideouts that will show you that you are committing sin. Remember that if you continue meeting in your hideouts one day your sins will expose you.

This is a period when a man and a woman agreed to marry. They immediately apprised their parents (both spiritual and physical parents) of their intention. The knowledge of their parents makes it official.

The official introduction authenticates the engagement. This type of engagement saves one from suspicions, shame and unnecessary query. It makes the marriage arrangement to move faster than expected. It marks the seriousness of the man. It also helps the espoused couple from going close since all eyes are on them.

Take for instance: A young man was fond of promising girls of his interest. Many of the girls promised did not know that he made the same promise to another. They all kept it secret within themselves and the young man. Really, the young man was sincerely ignorant of what he was doing. He was using that as courtship (i.e. a period of studying their likes and dislikes).

The young man sincerely wanted to avoid mistakes in selection. He did not know the difference between courtship and engagement. So he was sincerely open to girls of his interest and said "please sister, I want you to pray because I am interested in you. In short I want to marry you; so pray as I too will pray" he sincerely approached a very good number of sisters in that way. Why? The reason is that ''when he watched the attitude, like and dislikes of the one he approached; weighed it to match with his own. If it does not match, he leaves the girl for another. He was sincere since he was not after lovemaking rather choice making. He sincerely wanted to do the will of God in choice making. He did not know that he would have watched the lives of those girls

One day he approached another sister with his method, this one was very wise and sharp.

Perhaps, the girl had heard about the brother's method. Since the sister was very zealous to have him. Of cause, the young man was very promising, star and talented. He was the hope, target and interest of cluster of girls. So the sister ran immediately to her pastor and reported what the young star told her. The pastor immediately beaconed on the brother (both of them were from choir practice).

He further encouraged the young man to hasten up his proposal since he has the money already. The girl was appreciated for her boldness. Their engagement became official immediately. The girl later gained him to the altar.

When the other girls saw that they were dumped, they conspired to work against the boy, and to accuse him of immorality. Someone shunned them because the boy did not do such nonsense. I commend this wise girl. With wisdom she gained the young man to the altar. She gained the target of all other girls to the altar. Had it been that she kept it secret within herself and the young man, she might have lost him like the other girls. The couples are happily living with children.

Very interesting write-up @revjohno. You are a good author.

I found my wife through https://www.princessdate.agency/ It was very important for her that she was of slavic appearance. After all, I myself am Slavic and went to work in Europe. But then I could not find myself a suitable match.