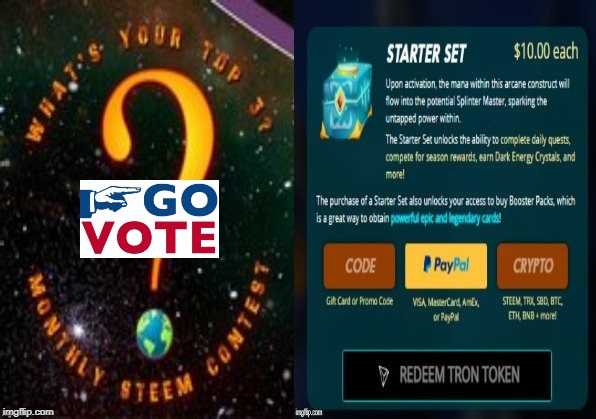 A little over two weeks ago I issued a challenge to the @yourtop3 and STEEM community in general.

I (@rentmoney) am the current active and defending TOP3 Champion and all you need to do to win a free Splinterlands starter set is dethrone me and rank first in this months TOP3 contest.

Currently its too late to join this months contest but not too worry because as already noted, YOURTOP3 is a monthly contest and you're more than welcome to join in on the next one.

I know what you're thinking,"Rentmoney if its too late to join this months contest then why are you making this post??". Good Question , you may not be able to enter but you can still help pick the winner of the contest via casting votes for your favourite Author.

This months topic was Authors and just like every other TOP3 challenge before this one, once all the entry posts are viewed and each entry logged, the results are then placed in a poll (this is where you come in). There was many good Authors nominated and if you have a spare second or two click the link below and you will be brought to Dpoll so you can pick and cast a vote for some of your favourite authors.

Splinterlands (also known as Steemmonsters) is a digital card game created by @aggroed and @yabapmatt. Early game release has launched and prizes are already up for grabs. You can start investing in or playing Splinterlands by clicking here.

Do we still have starter packs to be given away. I have few folks interested to join. Because it's not regularised in India they aren't willing to invest fiat though.

The one I'm giving away in the Top3 contest I had for some time. To the best of my knowledge, starter packs aren't given out for free anymore because too many abuse them and because there's currently a free play option. The free play doesn't allow for reward earning but lets people test and play the game.

Is it possible that in any future installment of YourTop3 we could vote or propose Steemit authors?
For example, if we address the subject of poetry, then the participants could apply for an author we like.

I will wait for the contest next month to participate

Those who host the contest have a discord in which you can offer suggestions for topics. If you're interested in joining the link is below.

Thank you very much dear friend.
I´ll check these link.

I would like to ask you a favor. You may have a couple of minutes to check a link that I will leave you.

We have been working on the launch of our own healing trail for our project @project.hope of which I am co-founder and is currently in ... let's call it: experimental phase.

Please let me know what you think and leave a comment whenever you can. Your opinion is a gold mine for me.

Thanks for the link @juanmolina,

I have read about the @project.hope project in the past and had some interaction with the founder @coach.piotr. I do at some point plan on making an informative post about the project to help spread the word. Thanks again for sharing the link.

You're very kind. I hope you can contribute to our brainstorm.

Mixed a bunch of authors. Fiction, classic, horrors ...
What is the point of comparing who is cooler than Stephen King or Stanislaw Lem?

The authors were picked by the participants whom nominated three each.