Will the Bermuda Devil Delta continue to stage a disappearance accident? 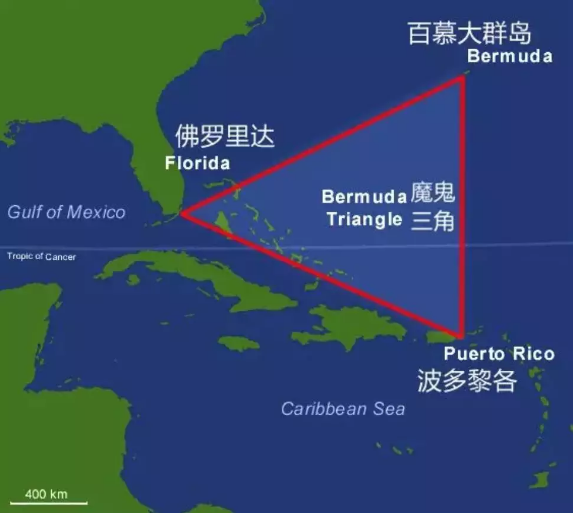 Bermuda is a small island on the Atlantic Ocean with a population of less than 100,000. It is reasonable to say that this place has nothing to do with our lives. However, when it comes to the name of Bermuda, there are probably few young people who don’t know.

In the extracurricular books we read from childhood to large, the concept of the "Bermuda Devil Triangle" is quite high. The so-called Devil's Triangle generally refers to the triangular region of Bermuda, Miami and San Juan, the capital of Puerto Rico.
Legend has it that there are frequent incidents of spirituality in this area. Whether it is an airplane or a ship, it is fierce when it comes in.

It is said that the existence of a time-space tunnel in the Bermuda Devil's Triangle will transport the aircraft to a strange world, and passengers will also "evaporate". Others even associate the Devil's Triangle with Atlantis myths or aliens.
Guess that the missing people were captured by mysterious forces.

These singular stories are really fascinating and can be made into several sci-fi blockbusters. However, everyone should not take it seriously. In reality, Bermuda is not a terrible forbidden place, nor does it have a time and space tunnel that you yearn for.
Most of the stories about it are made by fabricating and distorting the facts. The so-called devil triangle is not a natural phenomenon in nature, but a popular cultural phenomenon created by human beings.

In reality, Bermuda is a well-being and a famous tourist destination.

01 How terrible is Devil Bermuda?
The spiritual events of the Bermuda Devil's Triangle sounded mysterious, but in fact they are nothing more than two types: either a shipwreck or a flight missing. But ask the Devil Triangle how many ships have "eaten" the ship.
Relevant works can't produce accurate numbers. Some folk hobbyists have reported that there have been more than 900 traffic accidents in the region in the past 200 years, but this number is likely to be biased. Actually,
Folk experts who admire the "Devil Triangle" have never thought of using eye-catching statistics to attract attention, but rely on confusing case stories.

Among the shipwreck stories, the most commonly used to prove the extent of the devil's triangle is the warship disappearance and the ghost ship (a ship that floats like a ghost at sea, no one drives).
The classic case is the "Cyclops" and "Carroll A. Deering". The Cyclops is a naval transport ship with more than 300 ship uploaders and a displacement of nearly 20,000 tons.
In March 1918, it was loaded with ore and the result was suddenly disappeared while passing through the Devil's Triangle. Even the ship and the people disappeared without a trace. The steel giant ship with strong equipment and tonnage equivalent to a light aircraft carrier will inexplicably disappear.
Even the traces are not left, which is really amazing.

"Cyclops of the Cyclops | New York Navy Yard/Wikimedia Commons"
In contrast, the experience of the Ghost Ship Carlo Dinlin was described even more strangely. This multi-dwelling sailboat was built in 1919 and is usually responsible for pulling cargo in the waters around Bermuda. As a result, it has not been released for two years and the ship has disappeared. Until 1921,
People found it on the coast of North Carolina, and the hull was intact, but the people on board were not there.

Similarly, the disappearance of military aircraft is also widely circulated. In December 1945, five bombers went out to train and the signal disappeared in the waters near Bermuda. Then the navy sent a seaplane to search and rescue.
However, the search and rescue aircraft also disappeared shortly after. Together, a total of 6 aircraft and 27 flight crews were missing on this day.

"The Missing Navy Bombers | Lt. Comdr. Horace Bristol/Wikimedia Commons"
In addition to these classic cases, there are still many different stories in the Bermuda Triangle, but the story structure is similar. Most of the stories are about the case of certain types of vehicles that have been missing in the region. As soon as I heard it, Bermuda seems to be a bad thing.
And instilled in people the notion that "the Bermuda Triangle is very dangerous, the disappearance of transportation is contrary to common sense of life, can not be explained by science, but can only be introduced by the concept of space-time tunnel or aliens."
But in fact, this concept is wrong from beginning to end, because Bermuda is not dangerous, the traffic accident case in the area can be completely explained by science, and it is unfounded to be brought together with the time-space tunnel or UFO. .

02 The most dangerous sea area in the world!
The top ten in Bermuda are not listed?
First of all, we can be sure that most of the traffic accidents related to the Devil's Triangle do exist, and a small part of it is fabricated out of thin air. The news newspaper at that time can also prove this. However, they are too exaggerated to have too many ingredients.
And some important details were deliberately erased.

Objectively speaking, the military aircraft crash is a very regrettable, but also very common thing. It is said that in the past two years, our South Asian neighbors have crashed a military plane almost every month, and there have been more than 30 naval accidents in the past ten years.
The news of the crash of warship submarines around the world is endless. In the early 19th century and the first half of the 20th century, GPS was not born, the computer was not widely used, the aircraft was still using propellers, and the weather forecast was mostly guessed.
It’s not an incredible thing to have a plane ship crash in the Bermuda Triangle. What's more, WWF has counted the rankings of global shipping accidents, and the most vulnerable areas are the Sea of ​​Japan, the Mediterranean Sea, the Persian Gulf, and so on.
And Bermuda did not even rank in the top ten! Moreover, if a ship or aircraft crashes in the sea, it is a veritable "sea fishing needle" to find its wreckage, so it is difficult to find traces of it, and it is easy to form an "unknown end,"
The illusion of not leaving any traces.

As for the so-called ghost ship, it is not unusual at all. According to the Asahi Shimbun, the Japanese coast has only floated more than 100 ghost ships in 2017. The owners of these ships may have died in a shipwreck, and the bodies were washed away by the waves.
It is also possible that the dock was left unattended, and when the cable was broken, it was washed into the sea. Some ghost ships in the Bermuda Triangle are likely to appear like this. In addition, as mentioned above, the Caroline, according to eyewitnesses at the time,
It should have been attacked by pirates, the crew fled or killed, so it was only found when it was discovered.

In addition, a pilot named Larry Kusche (also a master of library science) started his own driving experience and documentation, and wrote a book to expose the truth of Bermuda.
He found that in the past, the story of the ship's plane crash has erased an important detail - the weather.

"Hurricane in the waters around Bermuda | Jesse Allen/Wikimedia Commons"
There are often hurricanes or thunderstorms in the waters around Bermuda, which is a great threat to maritime traffic. Like the Cyclops, it has already been mentioned in the accident report that the vessel is likely to have sunk by a storm that is 50-70 km per hour.
In addition, bad weather occurred on the day of the disappearance of many vessel flights in the area. However, the "loyalty powder" that is keen on the Devil's Triangle deliberately does not mention the weather to increase the mysterious nature of the event.
After all, if the disappearance is only the result of bad weather, it may not cause too much attention.

03 a pop culture carnival
In general, the traffic accidents in the waters around Bermuda are not considered as spooky events and can be explained by science. The so-called Bermuda Devil Triangle is not a natural phenomenon, nor is it an academic achievement discovered by scientists.

But if you want to ask if the Bermuda Devil Triangle exists? Then we should answer: It does exist—not in nature, but as a fictional cultural phenomenon in human books, television, networks, and minds.

"Bermuda Devil Triangle exists as a fictional cultural phenomenon | Wallpaper Abyss"
The concept of the Bermuda Devil Triangle has been a cultural product since its inception. Its proponent Vincent Gaddis is not a researcher, but a writer.
In 1964, he wrote an article called "The Death of Bermuda Triangle" published in the magazine "Argosy". The key is that this magazine is actually a popular culture magazine, and most of the content published above is a fictional novel.
It is equivalent to the "Story" that we Chinese are familiar with. Before the name of "Da Ship" magazine was renamed "Golden Ship", it was positioned as a children's literature magazine, equivalent to the "Fairy King" that we read as a child.

Imagine if someone wrote an article in "The Story" or "The King of Fairy Tales" and talked about the sporadic events in a certain place. Do you think this is a fictional novel, or is it a real event?

For a long time, the Bermuda Triangle was created by literature and has nothing to do with natural science research. However, the concept of the Bermuda Triangle is indeed very eye-catching because this area is a hot spot in the last century.
The western part of the area is close to the famous tourist destination of Florida, the south is the front line of the Cold War confrontation, and the central part has important Atlantic trade routes. In terms of time, it just caught up with the "UFO fever" of the 1960s and 1970s.
Four hot spots were smashed in one breath, and the Bermuda Triangle was hard to find. For a time, various cultural products related to the Bermuda Triangle, magazines, TV shows, B-rated movies, cultural shirts, etc. sprang up.
The famous director Spielberg was inspired and even filmed a sci-fi blockbuster "The Third Type of Contact." Later, the introduction of the Bermuda Triangle into China became a "collective memory" after many 80s and 90s.

From this point of view, although the Bermuda Triangle is fictitious, it does add a lot of wonderful content to people's cultural life, and even stimulates the interest of many young people around us to participate in scientific research. But anyway,
We should all give Bermuda a true look, not the shadow of the bloggers.