Thanksgiving only turkey, this meal is not complete! 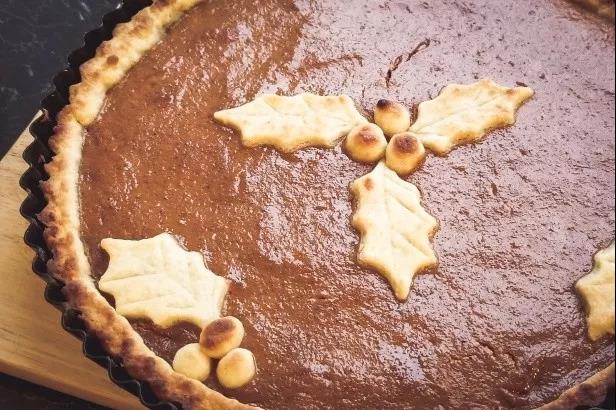 In addition to the absolute protagonist roast turkey in the middle of the table on Thanksgiving, the average family also prepares pumpkin pie.

The traditional pumpkin pie method is to dig out the pumpkin seeds and roast the placenta, and then dig out the melon meat, add condensed milk, cream, eggs, honey, cinnamon powder, etc. together to make a paste-like filling, and then put it on the cold pie skin Cook together and the delicious pumpkin pie will be ready. For pumpkin pie, it is best to use a variety of orange spherical pumpkins called sugar pumpkin or pie pumpkin. It tastes sweeter and more delicious, of course, other pumpkins are also possible.

Speaking of which, you will find that although pumpkin is usually called pumpkin in English, but if you go to some English-speaking countries-especially in North American supermarkets, pumpkin prices are often written on squash. This problem starts with the taxonomic status of pumpkins.

Three brothers of the pumpkin named:

Pumpkin, zucchini, and winter squash (Northern melon) belong to Cucurbita, Cucurbita, as are the other two brothers. They are native to the Americas. The earliest known pumpkin seeds were found in a cave in northeastern Mexico. It has been 9000 years. Ancient Americans liked pumpkins very much. According to records in the Mayan literature, the market value of 25 large pumpkins at that time was equivalent to one adult slave.

Before Columbus arrived in the Americas, pumpkins, squashes, corn, and green beans were the main crops of the Indians. Later, the three brothers of the pumpkins were spread to the world by Europeans and became widely cultivated crops. They are collectively called squash in English. Pumpkin refers to a round pumpkin with an orange-yellow color and smooth skin, which means that pumpkin is one of squash.

Pumpkin pumpkin is a kind of squash.

The shape of the fruit of the three pumpkin brothers is changeable. To distinguish the squash from the appearance, they must look at the perianth marks on the fruit stalk and the top of the fruit, which is commonly referred to as "umbilicus". The stalk of pumpkin fruit is pentagonal and umbilical inward; the stalk of zucchini is obviously pentagonal and the umbilicus is externally drummed; the stem of bamboo shoots is cylindrical and the umbilicus is a small dot.

Pumpkin lights were once turnip lights:

When the ancient Celts passed Halloween, they were more than a thousand years before Columbus, which means that they had never seen pumpkins, and naturally they would not have carved pumpkins.
In fact, the pumpkin lamp's original name "jack-o'-lantern" does not reflect the element of pumpkin. In ancient Irish legend, there was a strong man named Jack who turned the devil around with one mouth. Revenge after death had to carry a lantern made of turnip around the world, this is the origin of the pumpkin lantern. The pumpkin lamp carved by ancient Europeans was also made of turnip Brassica rapa var. Rapa. Immigrants who settled in North America later did not have turnip available, but found a plant more suitable for carving lanterns-pumpkin.

The turnip lantern in ancient Ireland looks a bit scary

Pumpkins are grown all over the world, and various flavors of pumpkin cuisine have been developed. In addition to the Thanksgiving pumpkin pie mentioned above, there are also steamed pumpkins and pumpkin porridge that are most familiar to Chinese people. In addition, there are many pumpkins Fancy eating.
The pumpkin in Thai style pumpkin pudding is both an ingredient and a container. Coconut milk, coconut milk, coconut sugar, duck eggs and spices are poured into the hollowed pumpkin and steamed, then cut and eaten together. The traditional Mexican food, pipián, is made by cooking pumpkin seeds, onions, garlic, and peppers into a sauce and adding it to cooked chicken and vegetables.

Japanese people who love sweets also like pumpkins very much. They will add pumpkins to various snacks. By the way, it is said that the earliest introduction of pumpkin cultivation in Japan was the great warrior Zonglin, and in Japanese the pumpkin is called kabocha (kabocha ), Derived from abóbora in Portuguese, which means melons.

Unlike many vegetables, pumpkins are not the best to eat when they are young, but fully mature old pumpkins taste the best. This is because many of the starches in them are converted into small molecular sugars, so they taste sweeter. When you go to the market to pick pumpkins, you can pay attention to the fruit handle. If it is hard and dry, it means that this is an old pumpkin. Buy it and eat it directly; if it is still upright, it is best to store it for a while.