Fifty years ago, this beast almost existed only in legend 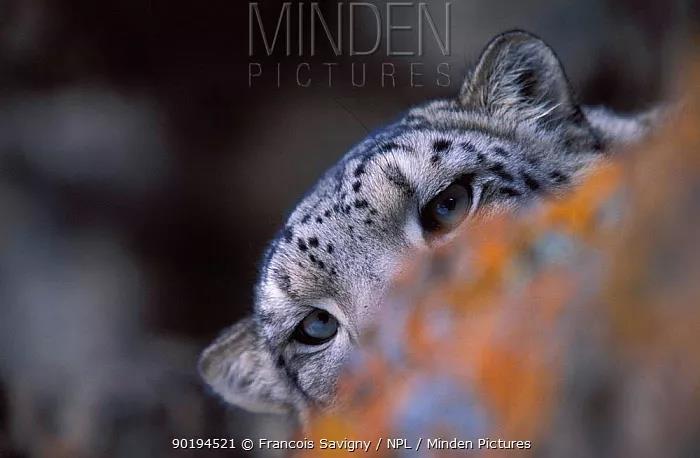 Before being recorded by George Schaller's camera, the Snow Leopard was like a phantom.
Although Sir Buffon completed the description of the snow leopard as early as 1761, the cream-colored fur and fluffy long tail also allowed people to easily distinguish it from other big cats, but in the hundreds of years since then, classic natural science The home study of snow leopards can only rely on the dictation of local residents, or the leopard skin and bones that occasionally appear in the fur market.
Neither Buffon nor Schreiber, who finally named the Snow Leopard according to previous descriptions, have ever seen the true content of this mysterious creature.

Phantom of the Plateau

The snow leopard photos and videos released by George Shaller in 1971 are the first humans to show the snow leopard. As imaging technology was increasingly used in the field of natural research, many organisms became familiar to the public. But Snow Leopard is an exception.
Some organisms have not been known for a long time, presumably because their appearance is not outstanding, or because living areas have little overlap with areas of human activity. None of this seems to explain the sluggishness of Snow Leopard research.
For a long time, large predators have always been able to catch people's eyes. The dangerous fangs and claws are fearful, but they often become totems. Felines are of course also the object of worship. After the rise of natural history, large cats' unparalleled status in the ecological chain has made them a hot spot for research.
As the king of the Central Asian plateau ecology, Snow Leopard is not only unique in appearance, but also the embodiment of romantic imagination in the mountains. Naturally, people cannot forget it. Although the mountains of the Central Asian Plateau are steep, the seeds of civilization have already multiplied here under the nourishment of snow and water. Local residents have long known about snow leopards. In many civilizations in Tibet, Nepal, and Central Asia, there are legends about snow leopards. Even in the Central Plains culture far from the mountains, there are traces of snow leopards. Some people believe that Li lives on "its 280 miles north ... the mountain of stonemen", and Meng Ji "like a leopard ... the title is white body", the prototype is exactly snow leopard.

King in the snow

So, what prevents the extraordinary charm of Snow Leopard?

In the era when early naturalists such as Buffon explored the world, the Central Asian plateau may still be an inaccessible life zone; but today, exploration of the deep sea, polar regions and space has become more common, and the plateau is not the biggest obstacle for people to study snow leopards. .
When we spread out a map of snow leopard distribution, we may find some problems: the distribution area of ​​snow leopards is very fragmented, and many artificial boundaries cut it more complicated-carefully observe a standard showing the landscape of Central Asia Map, it is not difficult to find these boundaries.
Mountains and rivers have always served as a natural boundary between nations. In addition to the solid lines that have been determined, there is another line-the "actual control line." For historical and political reasons, regions such as Kashmir have been very sensitive.

Blue is the current distribution area of ​​snow leopard

In 2009, an Indian graduate student set up an infrared camera to observe snow leopards in the Spiti Canyon near the border. Before the camera could capture the image, it was confiscated by the vigilant Indian Border Police. Fortunately, the graduate student had already filed a record before setting up the camera, and obtained the first approval of the local elders in advance, so he quickly got rid of the suspicion of "spy". But this episode undoubtedly shows that intricate boundaries may become an obstacle to Snow Leopard research.
In fact, George Schaller had a similar experience. In 1969, Schaller applied to the Indian government for snow leopard research, but he himself knew that such an application would be almost impossible to pass. Relations between India and Pakistan at that time tended to be tense, and the US support for Pakistan led Indian officials to take restrictions on American scientists such as Shire. Shale had no choice but to switch to Pakistan. Three years later, when he and his friend Peter Mattson tried to visit the Snow Leopard again, the renewed fighting between India and Pakistan turned them to Nepal.

This blocking not only blocked European and American scholars who wanted to study Snow Leopard, but also made it difficult for the world to know the achievements of Indian scholars. In 1967, Hari Dang, a middle school teacher from Dehradun, India wrote the article "Snow Leopard and its Prey" based on his many years of observation, but this article was not published in Indian magazines. reader. If it weren't for George Schaller reading this article, we would never know the world's first academic paper on Snow Leopard and its author.

Snow leopard (and its big tail) somewhere in China, the camouflage color makes it integrate well with the environment.

Despite its superior innate conditions, China's snow leopard research has not been smooth. For new China, which started from scratch, it is difficult to study and protect such a creature that inhabits the plateau.
The wildlife density in the plateau environment is very low, and the area of ​​an adult snow leopard is very considerable: before 1998, people tracked and estimated that the life range of a snow leopard was 58 square kilometers; but when a more accurate GPS collar After being used, this number climbed to more than 1,590 square kilometers, not to mention that this vast home covered many rugged mountains and glaciers. The alertness of the snow leopard's haze in the morning also made research difficult.

What's alarming is that when scientists are struggling to find traces of snow leopards, the bodies and fur of snow leopards continue to appear on the black market. From 1990 to 2011 alone, at least 432 snow leopards were hunted in China. As long as it is compared with the global wild population of 4,000 to 7,000 of this species, it is not difficult to find the urgency of systematic research and protection of snow leopards.

With the help of Western scholars represented by George Schaller, China's snow leopard research has risen rapidly, and Chinese snow leopard researchers have begun to take the world stage. One of them is Professor Lu Zhi of Peking University and the Shanshui Nature Conservation Center. Today, Chinese scientists have taken on more and more important roles in the world's snow leopard research and provided many "Chinese ideas" for protecting snow leopards.
Dr. Li Juan was the first Dr. Snow Leopard under the guidance of Professor Lu Zhi. While researching the snow leopard in Sanjiangyuan Nature Reserve, Li Juan realized the conflict between snow leopard and humans: Although most snow leopards prefer to eat rock sheep, northern goats and other ungulates at high altitudes of 3000-5500 meters, The cruel environment in winter and the declining status of ungulate resources still make snow leopards pay more and more attention to another option in the valley-human herds.

Snow leopard and people have a long history. The plateau resources are not rich. Just like the vast home of Snow Leopard, human activities also need more land, and the scope of activities of the two inevitably overlaps. Even in the Sanjiangyuan Conservation Area with complex environment, there are 12 towns, 53 administrative villages, and countless livestock.
Although the loss of livestock caused by snow leopard predation is less than that of many beasts (for example, it is only ¼ of the wolf), this will not save the snow leopard from the bad luck of revenge. The wide distribution and large scale of habitats have determined that the protection of snow leopards cannot be adopted in a "closed-in" way-it is an impossible task to complete the removal of all residents within hundreds of thousands of square kilometers.
Therefore, how to make people coexist with snow leopards has become the research focus of protecting snow leopards.

Snow leopard in the Himalayas.

Li Juan's visit to local hunters found that 42% of herders consider hunting a sin, which may be sufficient to explain the appeal of religion. For the remaining 58%, the lamas also have countermeasures-most of the temples in Sanjiangyuan will regularly organize patrols on the mountain.
The connection between Lama and Snow Leopard protection was not the first of Li Juan's. As early as the 1980s, Schaller had proposed such a concept, but the second half from conception to practice was indeed completed by the Chinese. Today, this experience has been introduced into the protection of snow leopards in other countries. Some once blocked the boundaries of scientists but could not stop the lamas. When a lama in a monk's clothes learned to set up an infrared camera and track the collar signals, the future of the "God of the Snow Mountain" seemed to be dawning.

Looking back at the history of protecting snow leopards, Michael Lewis of the University of Salisbury once said: "When species are no longer treated specially because they are a symbol of the country, they are treasured because they connect people across national borders." That's what protects snow leopards.
The road to protect snow leopards is still as rugged as its beloved cliffs, but the future of people and snow leopards may be as wide as the peak scenery.