The Understudy Gets A Trim And A Thorough Inspection 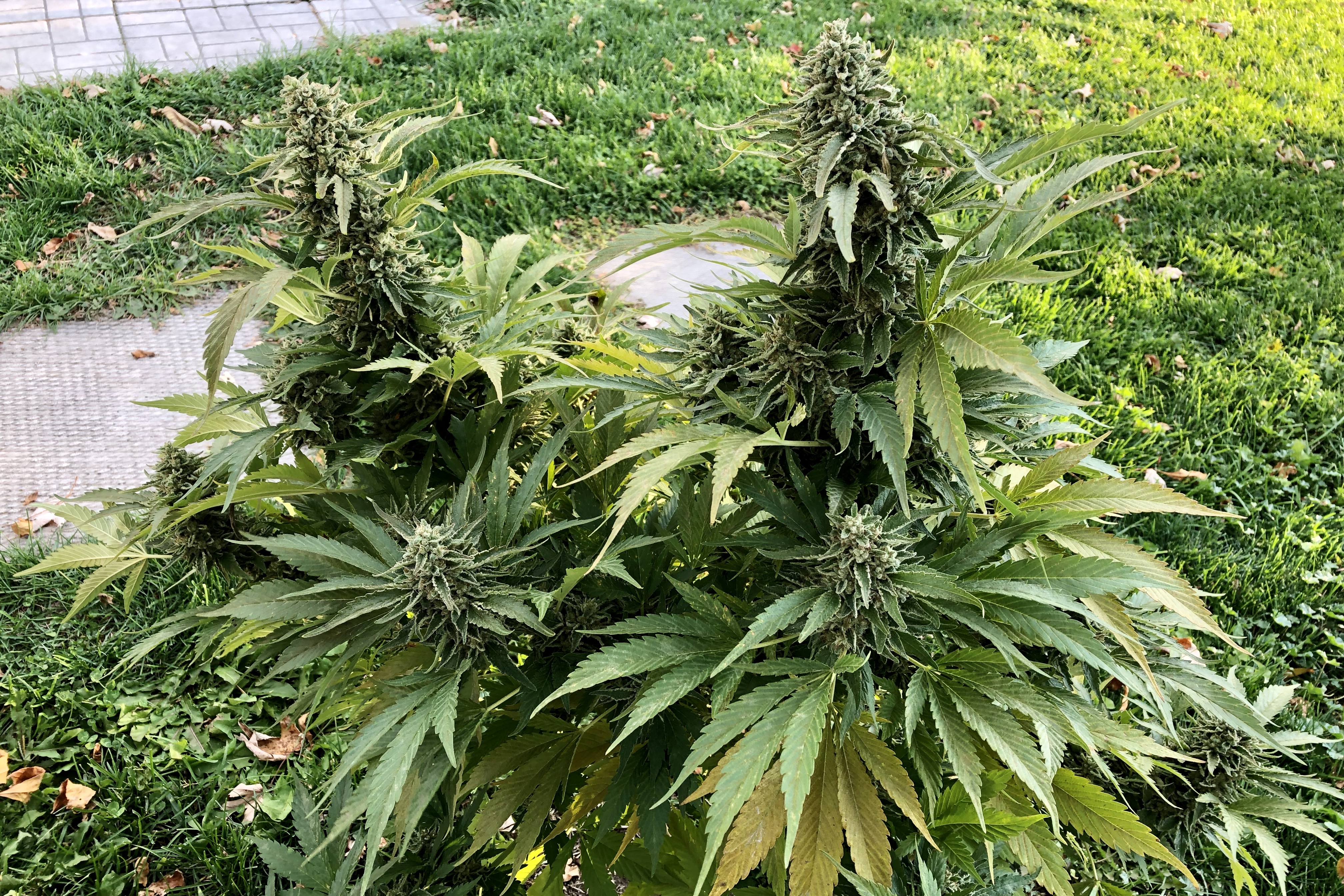 AC/DC is the strain name of this cannabis plant.

This was my smallest plant. She was only 27 inches tall at the tip of her highest cone and she only had 2 main branches, off of 1 central stalk.

When I made a growing plan in January (it’s now the end of October) I grew from seed.

I generally plan my garden on paper and I keep a gardening journal. I do this so that I can keep myself organized throughout the grow; record issues that arise with specific plants; remember when to feed and document any observations that are new to me.

Not all of the seeds that I grew were feminized.

This means that I germinated and then had to grow each seed to a certain level of maturity before the gender of the plant was revealed to me.

Doing this (as opposed to buying female clones, or taking a cutting directly from a known female plant) meant that I took the risk of potential pollination of my known females by exposing them to male genetics.

I expected a few males to show up to the party. It’s not their fault, it’s a 50/50 chance when working with unknown seed.

To accommodate for this, I grew a few extra plants just in case, I might need an extra one here or there.

Before I harvest, I like to remove as many of the remaining leaves (as I can) while the plant is still standing.

Once thinned and cut, you can start to see what her wet yield actually looks like in the photo (below):

Not too shabby for a small plant that was labeled as surplus.

In the photo (above) you can see what a cannabis flower looks like as it is being deconstructed.

Normally, these flower cones would be hung to dry.

I am freezing drying this plant’s flower and have “trayed” them, immediately after I trimmed it.

It’s hard to beat that level of fresh.

(The freeze drying process will take 24 hours and then I am planning to make concentrate out of it.)

What you will notice is that there are some full looking pre-flowers on this stem.

It is common for a female plant to muster a little bit of extra energy to produce a few seeds...especially if the pheno-type or strain possesses that genetic propensity or natural tendency.

In the absence of male pollen, a female can and does produce a few seeds to ensure the continued survival of the species. Female plants can also grow male parts if their growing conditions become too stressful.

If that happens, the plant has become known as a hermaphrodite.

When we harvest, it’s not only the resin that we’re interested in saving.

Actually, most of the plant can be used, including the roots.

(That is, if the plant was grown with knowing intent and was fed organically.)

I didn’t save any roots or even any shake (sugar leaf trim) but I did save seeds.

Seed price varies depending on the perceived value of the genetics.

I purchased AC/DC seed for this particular grow.

Each seed cost approximately $10 CAD, so I made the effort to comb through all the flowers and harvested what I could in an effort to seed subsequent gardens.

Nice lil plant there @Rebeccaryan :))
You did really well again this year. You're flourishing <3

This will be the last year that I will do everything by hand.

Been at it for 30 days.
There isn’t a surface in my house that isn’t sticky or doesn’t have cannabis in it.

The smell: My Mother says she can smell my house 50 feet from my driveway, due to the volume inside.

I’ve been in dispensaries that have smelt less dank.

I wiped my ass the other day and found shake...it’s everywhere and I’m seriously trying not to lose my ocd shit over it, but

I’m riding the ever precarious, dangerous outer rim of cannabis production in the unrefined bowels of Ontario, right now.

Lmfao!
Silver-lining: have developed additional skills and discovered that I can trim in my sleep now. Lolz!

So your not afraid of these seeds being bad genetics since they came from a herm?

No. Just so I am clear, I don’t think this particular plant is a herm because it would have more seeds.

I only mentioned the herm factor so that I covered it as a topic in my post. It does happen.

Almost every plant I have ever grown (to date ) has produced 3-6 seeds. I think it’s due to the genetics of the plant and the growing conditions of my country...mostly cold.

I just harvested this plant 2 days ago. Normally, would have taken her weeks ago but more valuable plants required my attention first.

I am shocked at how long I was able to keep this particular plant viable at 2 degrees Celsius or 36 degrees F.

Beautiful crystalline buds. I get the same thing with seeds, as I usually leave plants go till almost November and the cold shocks them in to some stress I think. This year I tried growing from seed and a giant caterpillar had a serious pig out fest and ate all of my starts to oblivion ;(. Thinking about next year's grow, as I might put up security system or just grow a few plants in doors. I'm curious about the "freeze dried" process.

I like the ACDC for RSO oil as I help many people access this amazing strain for all kinds of stuffs.
Happy Harvesting..

I am excited and happy to converse with you.

Might sound like I’m crazy, but I no longer care and need to get tools in the hands of those who can and will help themselves and others.

For your consideration with your next grow:

With an address, my genetics are yours.

I have most recently learned that:

Karma is meant to be identified for what it is, and righted in the same lifetime.

It’s far better to do it now without the handicap (of having to start over in the fog of amnesia that comes with the birthing process of a physical body).

Carrying negative emotions over from one lifetime to the next, will stop now, if you so choose.

Our thoughts create our realities. Let your thoughts focus on higher vibrational thoughts as opposed to lower; where-by you feel you can’t grow without a security system due to the potential on-going violation of your free will.

That feels conditional (to me) and like it will cause you to continue to suffer and bring more violations.

Please look at this when you have time. Considering using it to heal yourself, your loved ones, your friends and even the animals who cross your path).

Much love to you. XO

Wonderful response... I'll have to check this out a bit more, as I clearly got 2 of these in the questioning....

Love the positive creation of our heart and mind frequencies in congruence. I found the topic of "safety" come up for me after my plants were cut and taken. A large topic that entails fear, contentment, pure acceptance and accountability of consciousness. I look forward to checking this Doctor out... thank you dear one...

Oh good! (I’ve edited this to add more clarity.)
I (with help from others ) have cracked the code (of life) on this planet and I ( along with those on the same frequency bandwidth ) are in the process of remembering how the game of 3D realty works.
Here’s the actual math of consciousness:

Everyone’s personal power resides in the honing of:

their ability to tame the intensity of the emotion which oozes from their experiences and forms their perspectives or general opinions about things, both positively and negatively.
Just like an electrical charge can be.
When we come to a neutral point, (Zero-point energy) not being swayed too far off of centre or perfect balance + or - we can go from unified field (the collective consciousness) to singularity (ONE Consciousness).
When we do that, we’ve achieved God Consciousness or ONE) and can move mountains of granite. Literally. Co-resonance amplifies power with focused intention.
Your emotions fuel your current (already strong) ability to manifest.
When all your thoughts are neutral and pulled slightly + your frequency shifts and every thought that’s a match starts and/or continues its materialization process into our Time/Memory reality.
If you focus on lack of security, and fuel that with worry about being in danger, that’s what you will bring right to your doorstep.

I encourage you to find a neutral thought around growing and then think about something completely unrelated that makes you feel slightly happy.

That’s how anyone can change their personal frequency, to positive.

Find as close to neutral in your thought and then think about anything that makes you remember being happy. Or, simply think about what happy feels like.

With your permission, I will set up an energetic grid of love around you and your cat...until you can sort your thoughts and stay neutral on the topic.
This is why it’s so damn important to fix emotional trauma by acknowledging it and letting it go...
If we fail to do this, it’s very difficult to generate neutral thoughts and you get stuck energetically and your body registers pain and sickness.
Your experience triggered me to interact.
Let this trigger your thinking.
Love to you. Xo