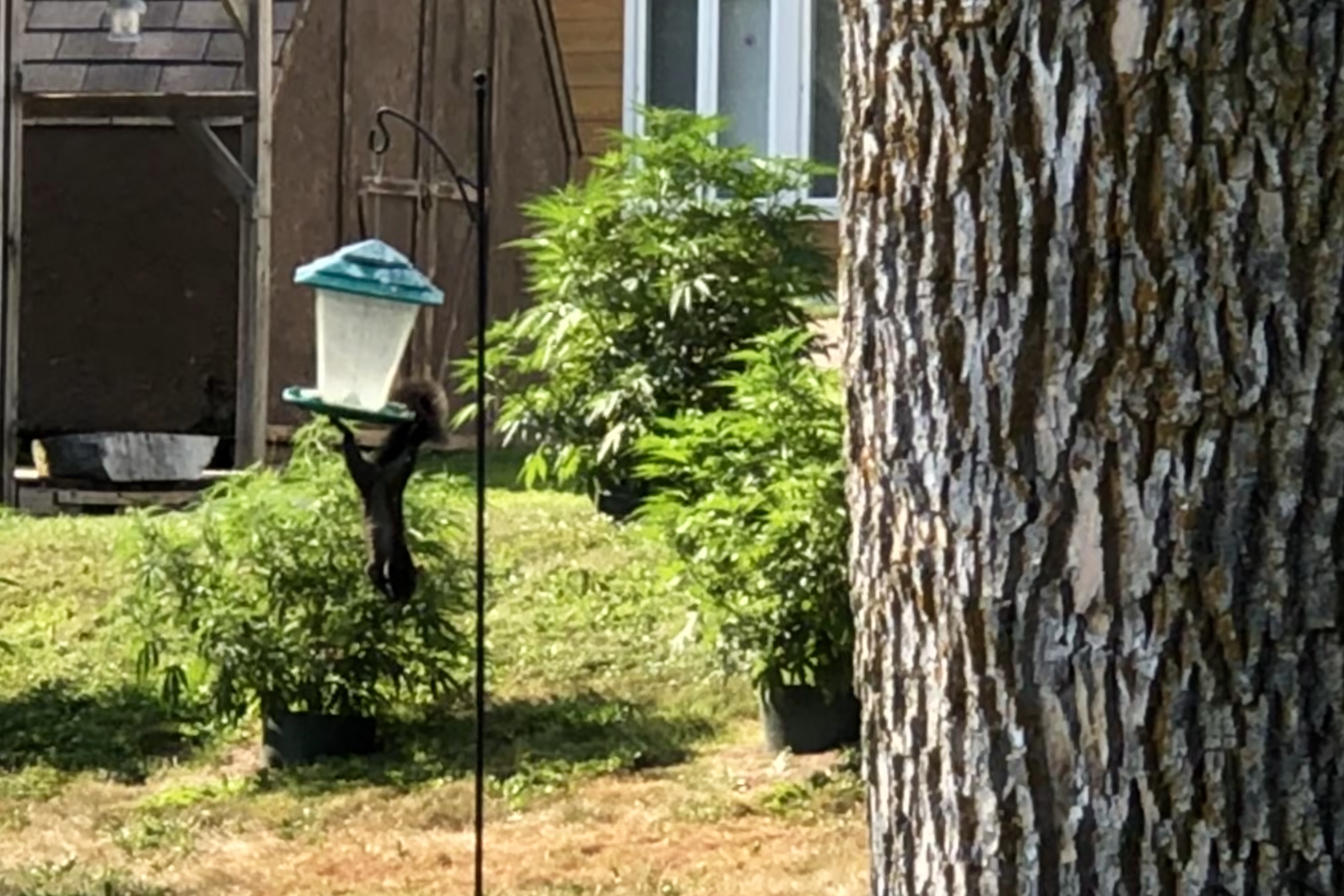 Grown from seed (inside, in Canada, during the winter) at the end of January 2019.

Planted outside (in the summer, after the risk of frost) in the middle of June. (We were 3 weeks late this year, because the temperatures at night were too cold.)

(You just never know what kind of training you will witness happening in a cannabis plantation, from one day to the next.)

This year, I ended up with a medicine chest.

I grew many high CBD and hybrid strains (containing a healthy mix of THC and CBD) and I grew a few high THC strains, too.

12 different strains, 25+ plants and I can report that I will never do that again.

I learned. Too many different nuances, between strains to stay ahead of.

Three of the strains that I’d like to showcase are:

What? Hasn’t a bush ever gotten away on you?

I am thinking that Steem OG should be a good late afternoon strain because of her higher Sativa traits...as you can see from the girth of her leaf, there’s definitely some Indica in the mix too and I’m guessing that came from the Tahoe Gold, originally. (I’ll keep you posted.)

@bluntsmasha gets credit for the next 2 strains.

More thinning is required. She’s living up to her name.

Diesel, coffee with an end note of powerful skunk is the aroma-signature that she’s currently wafting through the countryside.

This strain surprised me. She’s an early bloomer at 6 weeks in.

2.5 months left for this particular planting.

I’m going to do my best to keep my flower weight supported.

An additional rigging system will be implemented when needed.

Right now, the goal is to thin useless foliage, to allow air movement through the centre of the plants.

This will strengthen branches and reduce the risk of contracting powdered mildew.

These Queens are growing on a south facing hill, in full sun.

In addition to peat/coir based Promix, I used mushroom compost, this year. This is new for me. It does seem to be working but I am unsure how necessary it and the effort to do so, really was. (I’ll keep you posted.)

I’m watering daily and feeding for veg state, once a month.

I have been really pushed for time as of late. This is why these girls were so bushy...2 weeks of minimal attention while I sold a piece of real estate, closed a business and cleared my schedule...for life. ;)

Omg so cool to see the Steem Og outdoor!!! She’s going to be a monster, already is lol. So far the best report I got back from someone that finished steem Og, they said it really helps their PTSD. I was so happy to hear that.

Well, I’m going to try to pull 2 lbs off her, Jon.
She’s currently 5 feet tall and 3 wide at her widest girth.

From my forehead level:

You can hardly tell that she was thinned, 2 days ago. ;)

Wow! Such a trip. Thanks for goving my seeds a chance! Also maybe you can give it a try to any people you may work with who have ptsd.

You have my word that I will and I know many personally. Consider it done.

Thank you!
We’ve reached the 1/2 way mark.
Hopefully we can survive the winds of late August.

Excellent plants. We're happy to hear you're doing well (despite Steem itself having a bad case of powdery mildew). Your outdoor grow skills are outstanding! Thank you for the post :)

Hahaha! I have learned that powdered mildew is like an STD in the world of growing cannabis. That scourge is everywhere.

Like most things in life, the correct amount of movement or change keeps environmentally circumstances, more comfortable.

Cannabis has protected my brain and spinal cord. It also put an autoimmune disease into remission.

The neurologists can’t understand how I can walk, talk or even remember my name because my MRIs are showing holes where the brain tissue is completely missing.

The Canadian neurology treatment plan is to order an MRI (once a year) and count holes (with their naked eyes) to determine if there is any disease progression, from one year to the next. They said that I did not qualify for “the prescription drugs” normally prescribed for someone who’s MRIs present the way mine are, because I am too high functioning and they can’t justify it.
Lolz! You fucking bet, I’m going to do everything in my power to keep it that way.
The parting words were: “Rebecca, don’t worry about the holes, they just fill up with water.”
So, not dwelling...not giving up...fucking ecstatic that my brain on cannabis has completely rewired itself and will do stem cells to see if I can further restore damaged tissue.
Please feel free to share my story with your crew.
It’s all good. ;)

You are such a great grower rebecca!! May your harvest be a big one. Also have you checked out the Steem Engine tribe, Weedcash, would love to see your content over there. All you have to do is use the weedcash tag. Easy peezy. You can ask me more in Discord if you like, btw is jon. Yes i know I told you earlier, but i would really love to see more growers using the tag. :)

Wow beautiful. You have really put in the work. I am happy you were able to squeeze in life. It is important.