THEY FINALLY FOUND THE YAMASHITA TREASURE! 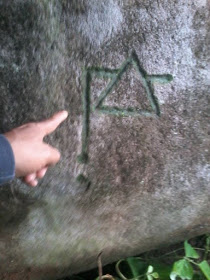 The Yamashita Treasure Finally Found By Filipino Treasure Hunters?
The Yamashita treasure is probably one of most well told urban legends in our country - a supposedly huge amount of gold bars, golden Buddhas, chests of golden coins and jewelries made of precious gems buried by the Japaneses soldiers beneath the Philippine soil during World War 2.

But was it really no more than just a legend - a myth, a bedtime story that our grandfathers told us before we go to sleep to stir our imaginations? Well, some people claim that they have found sites where they found in turn queer artifacts which they believe to be markings that tells the location of the legendary treasure.

The Treasure Map and Code-Breaker

According to a group of Filipino treasure hunters, they have found a treasure site in April of 2003 in Bukidnon with the help of Japanese maps dated 1945 which he found earlier during construction work on a patch of land meant for a poultry farm. The said map comes with a code-breaker dated 1942 and was authored by a certain General Tunjo. These documents led them to excavate 65 feet under the ground after going thru 5 ft of hard cement slab.

Booby Traps
The diggers, headed by a certain Gary Bautista, also claimed to have encountered 3 chemical traps, the last of which almost killed several members of the excavators.

According to other documentations of such excavations found on the internet, there are various hazards when digging a treasure site - for the Japanese soldiers placed booby traps all around the treasures. Most common of these are water traps, spring loaded bombs and glass-encased cyanide capsules.

According to treasure hunters, you'll know the right spot where the goods are buried depending on the markers you will see as you dig. Some markers points the exact location of the treasure while are placed in the site as a diversion to confuse treasure hunters.

They also believe that these marker stones sometimes indicate what particular treasure is buried at the site.

Yamashita treasures are said to have been divided and buried in many different locations all over the country so as to make sure the allied forces will have a difficult time finding it. As mentioned, the sites are often laden with marks and marker stones buried more than 50 ft. beneath the ground.

Authenticity of the treasure hunt

While many will find the story of the treasure excavation of Gary Bautista it to be no more than a hoax, some find to this story's credence because of the number of other people's comments on his now defunct blog claiming that they too have found similar sites with the same stone markings to that of Bautista's.

There are no new updates on Gary Bautista's Yamashita Treasure excavation which he said they stopped the operation on 2004 due to lack of resources. His blog where he documented his team's excavation is now redirecting to a blank website when visited.