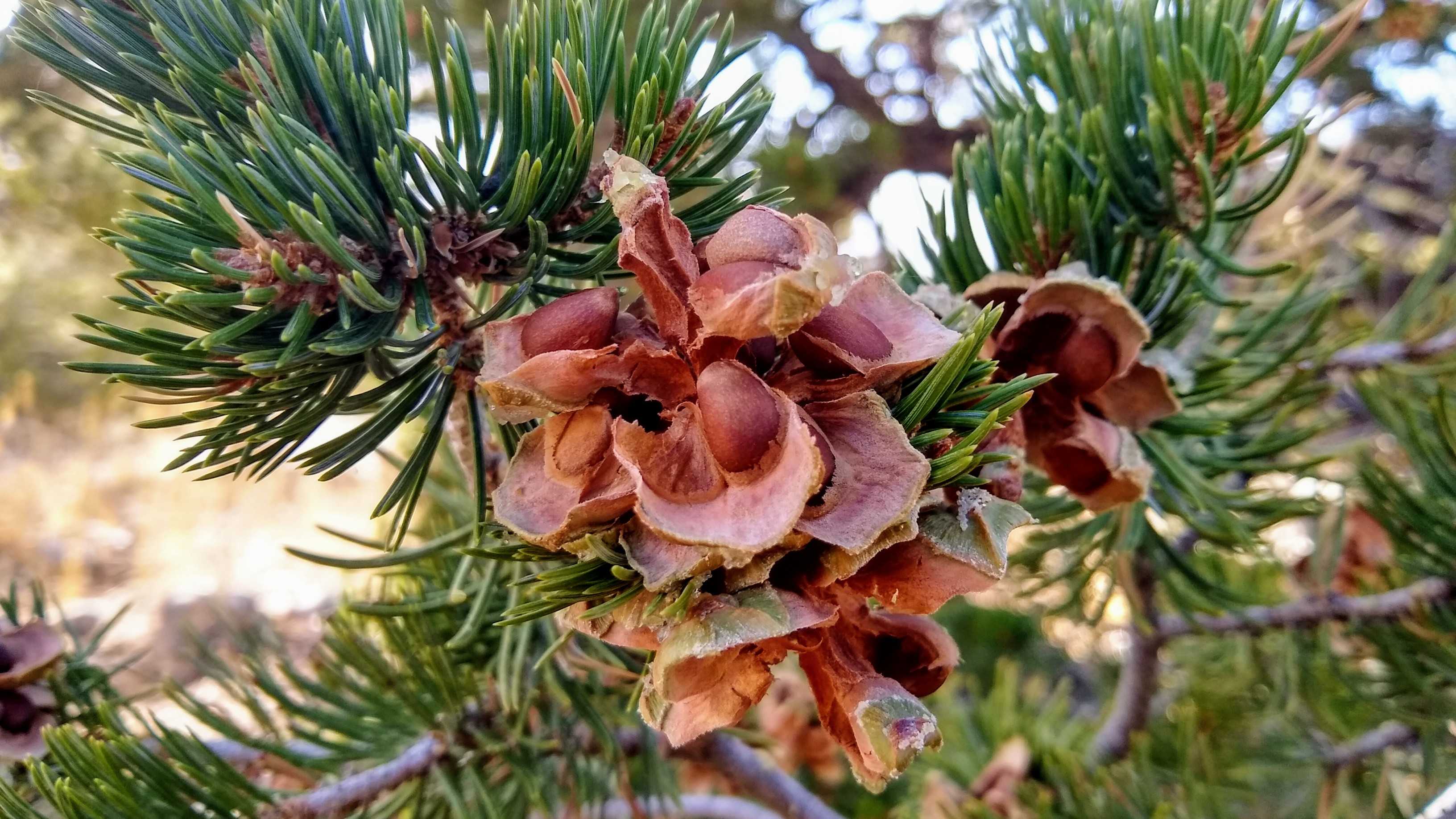 A few days ago we met a local named Paul who lives adjacent to the public property here where we are camped at. He likes to collect "treasures" on the mountain and this is the time of year when he collects pinion nuts. He has been going for the last week or so to collect them then and we tagged along today.

We drove up the base of the mountain following him on his ATV. At a good parking spot, we left the truck and he gave me a ride to the spot on his ATV. Then I took the ATV back down to pick @scarletreaper up and we drove back up with the dogs running along behind.

The spot we went to had lots of pinon nuts near the base of the trees. The pine cones had just burst recently so many fresh ones could be found. Some areas under the trees you can just pick dozens without moving because there were so many.

To eat them you have to crack them with your teeth and discard the shell. This takes some practing and I still ruin some, but if you're lucky or just good you can get the inner fleshy nut part out unscathed. They taste great, like a piney pecan to me.

After a couple hours we had nearly 3 lbs of pinon nuts. Paul said he sells them for $25 a pound so it sounds like it could be lucrative as well. For now we are just going to enjoy snacking on them and maybe try cooking them like he suggested.

Lucky! I have gone to get pine nuts in many years as they don't grow here. Did you put them in the oven to roast? We used to pick up the entire cone and bring home large garbage bags full, place them on cookie sheets and roast them.

We were able to pick most of them right off the ground. We looked for spots where lots of dried pinecones were on the ground under the trees and many were found here. It was actually more work getting them out of the fresher pinecones.

So far we have only tried them raw but Paul suggested putting them in water with some salt and seasonings, simmering until all the water is gone.

Lucky you!! They cost a lot to buy- but it makes sense since they are lots of work. They are great in pesto too and yummy roasted.

Have you found a place yet you want to settle?

We have been enjoying southern and south-central Colorado so far, but it's really hard to just pick one spot!

One of my favorite areas in near Stonewall Colorado off hwy 12. Great elevation getting you into the Aspens and spruces.

I would definitely want a nice wood burning stove and lots of wood chopped before winter though!

Winter is on its way :) Anyway, you can always come to California if you haven't settled down yet.

Wow what a great time today. Was glad the dogs liked them too! Lol was funny watching them snack on nuts while we foraged

People cultivate the nuts or those are just wild?

These are all wild trees and cover parts of the mountain at a certain elevation.

You have accordingly been rewarded 45.6475 AFIT tokens for your effort in reaching 8051 activity, as well as your user rank and report quality!
You also received an 0.54% upvote via @actifit account.
Actifit rewards and upvotes are based on your:

@rakkasan84 what region did you find these in?