Showcase Sunday: The Tale of a Reformed Vegetarian 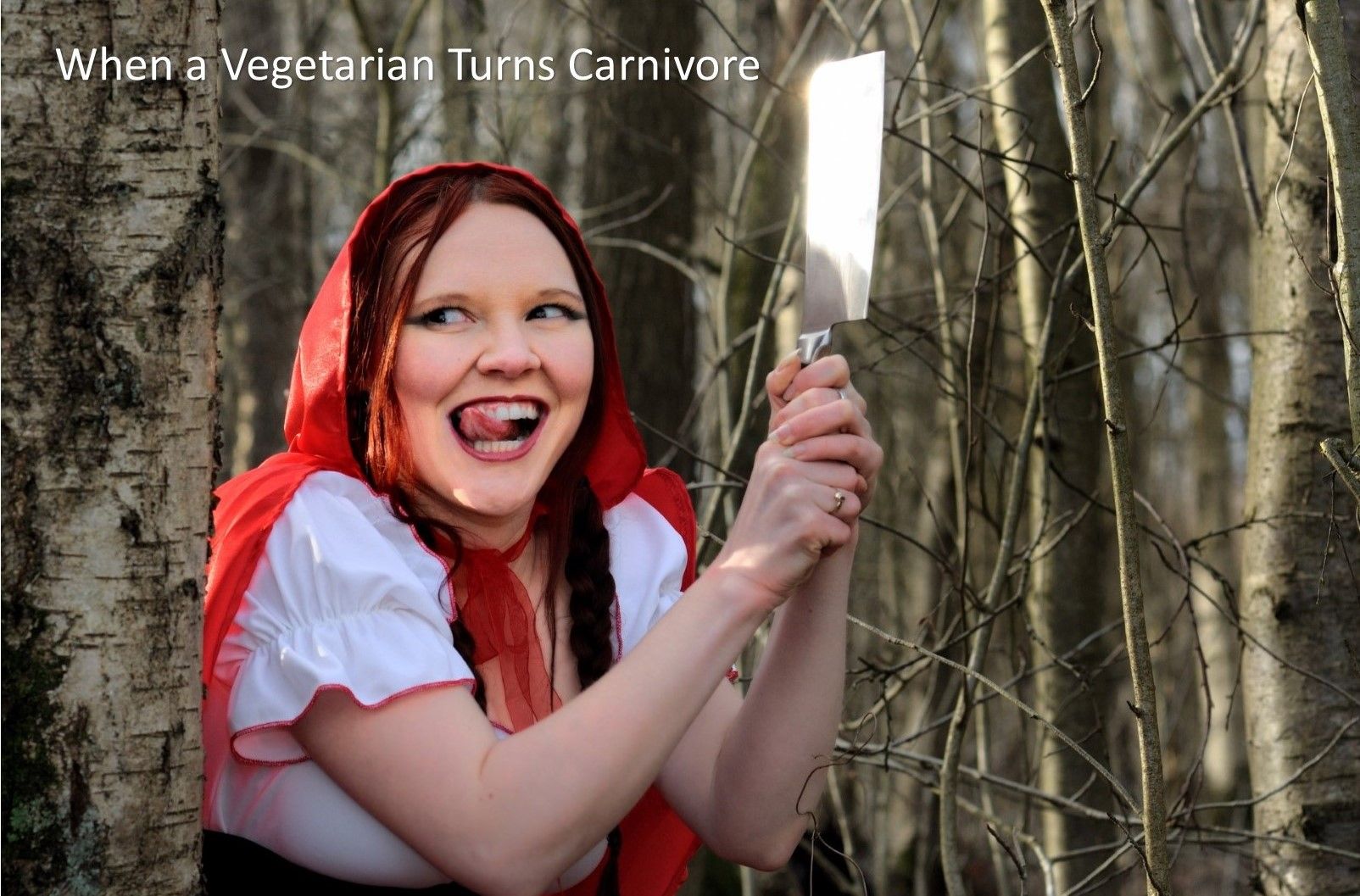 What is that I hear you whisper... Showcase Sunday is here again! Some old timey steemian shilling their past posts like Walter White when he realizes he's fckn hard as nails.

This one is going to be another comedy post from the vaults of the depraved mind of raj808. Hopefully some light relief from the 1001 articles you've just read about the steem pump. Maybe a change from the sluice of posts about why you should rush NOW to vote on a steem proposal... seriously, I'm not joking GO DO IT NOW!

A piece of writing that a non steemian might discover, understand, have a chuckle at and then think 'I'm gonna check out that site again', rather than wander away scratching their head feeling a little like they've been allowed into a secret club, only to leave with a headache because everything they read is about the intricacies of the steem blockchain.

Something fun, funny and just for shits and giggles.

The Tale of a Reformed Vegetarian

Buckle up your seat belts and strap in for a tale that will chill you to the bone!

A tale of heartbreak, drama, betrayal, love, hate, pastrami, bacon, chorizo and all kinds of artisan hams. Warning! There may be graphic descriptions of meat envy in this post which some readers may find offensive.

Also, if you are offended by being preached at... look away now.

I have been a vegetarian since I was 6 years old. To preempt all the self-entitled idiots and their self entitled outrage I will explain myself in the form of a poem because I have heard the same set of questions over and over again all of my life.

When I was just a wee sprog
I asked my mother what's in this hotdog?
She said, 'that was a pig', I thought, this is just sick
and gave up meat to the relief of all hogs.

That's pretty much how I remember it, my mum was a hippie, she said that's fine; I haven't grown up with any brain underdevelopment, or muscle wastage. I'm a 6.1 feet tall male with a stupid amount of middle-aged podgy fat and an enjoyment of beer and boobs, so that pretty much covers the questions about if you can develop properly without eating meat. I'm living proof... that a man can develop just as sophisticated a set of various stuff, things and ideas on a veggie diet.

But here's the thing! I recently developed an unhealthy addiction to a reality TV show called....... Bear Grylls The Island... and this changed everything.

For anyone not familiar with this Goliath of light entertainment, Bear Grylls - the guy who can be seen above proving that you can squeeze life sustaining moisture out of a lump of shit - dumps 15 morons on a tropical island with a days survival training and a few machetes between them. Then through the power of clever editing we have a show where you can watch a bunch of absolute dickheads starve until emaciated and fight among themselves. All the while watching from your couch, eating pizza and nodding in the knowledge you could do so much better. It's a winning formula and I have now exhausted the supply on catch-up TV and feel like a crackhead who has sat on his pipe.

A strange thing happened while watching this show, I developed meat envy. Watching this rag-tag assortment of privileged city workers, plumbers, builders, hairdressers and even a call center operator, hunting and killing a pig released the inner beast in me. Before I knew it, I was no longer seeing this: 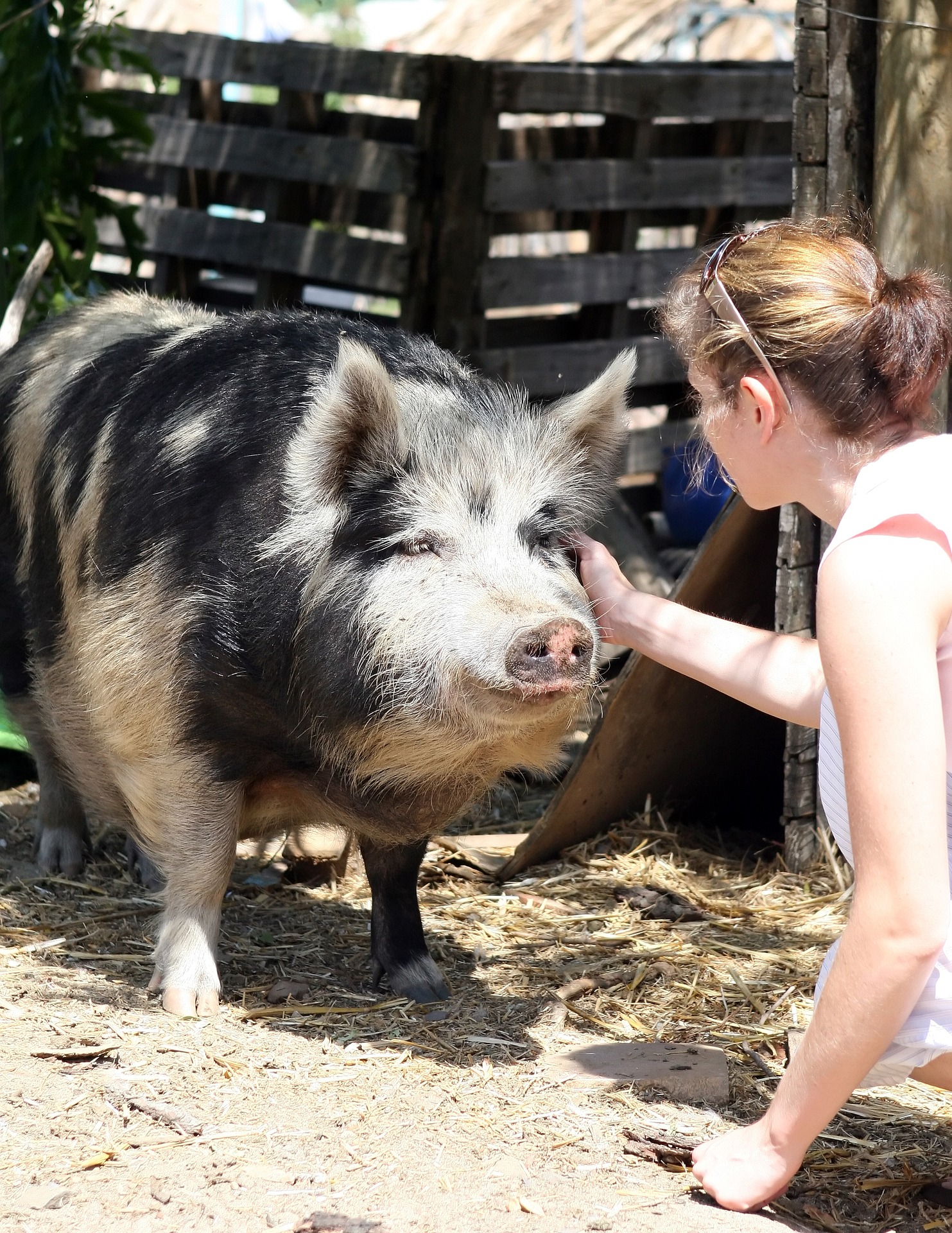 Instead, I was seeing this: 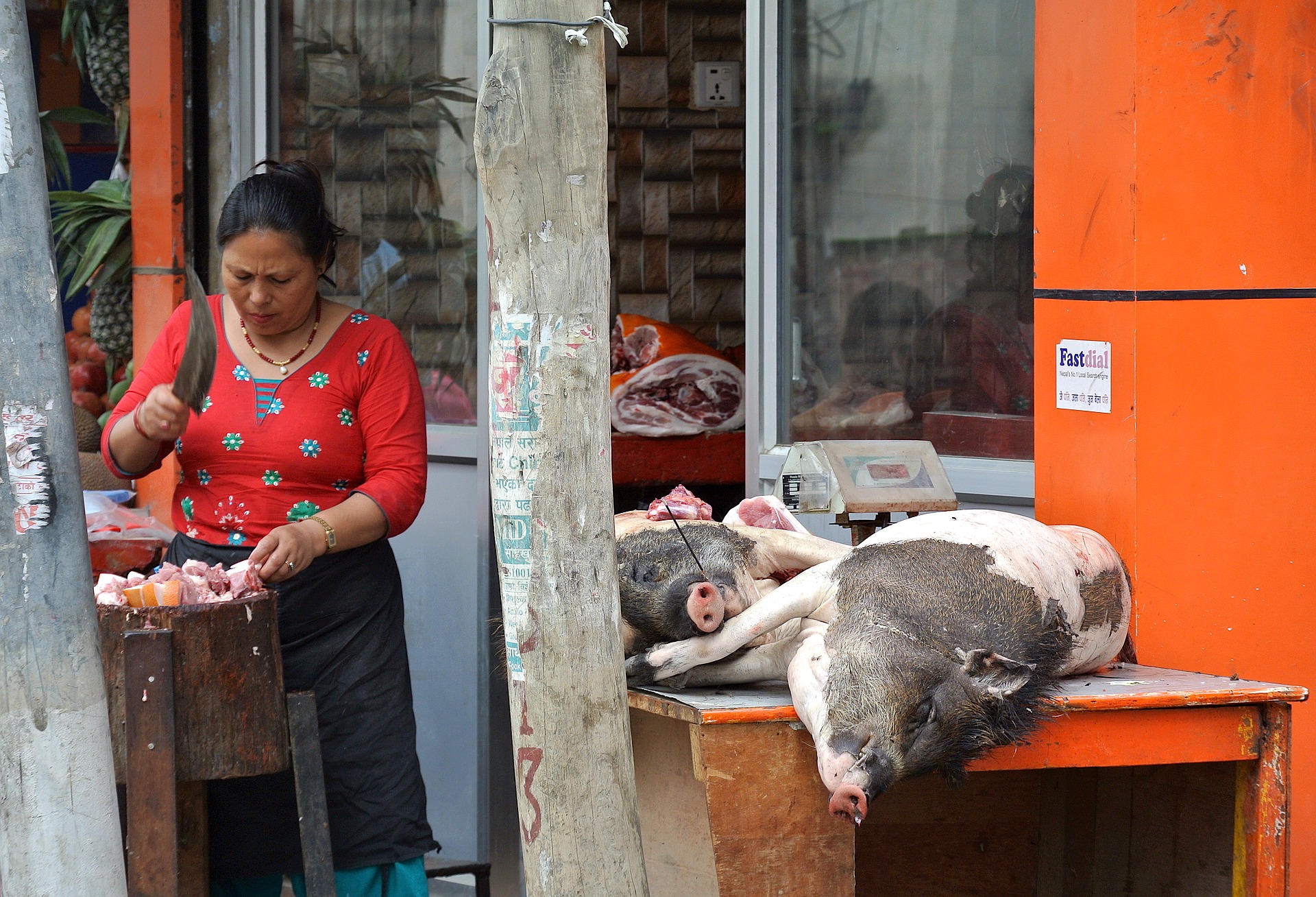 And then eventually, this: 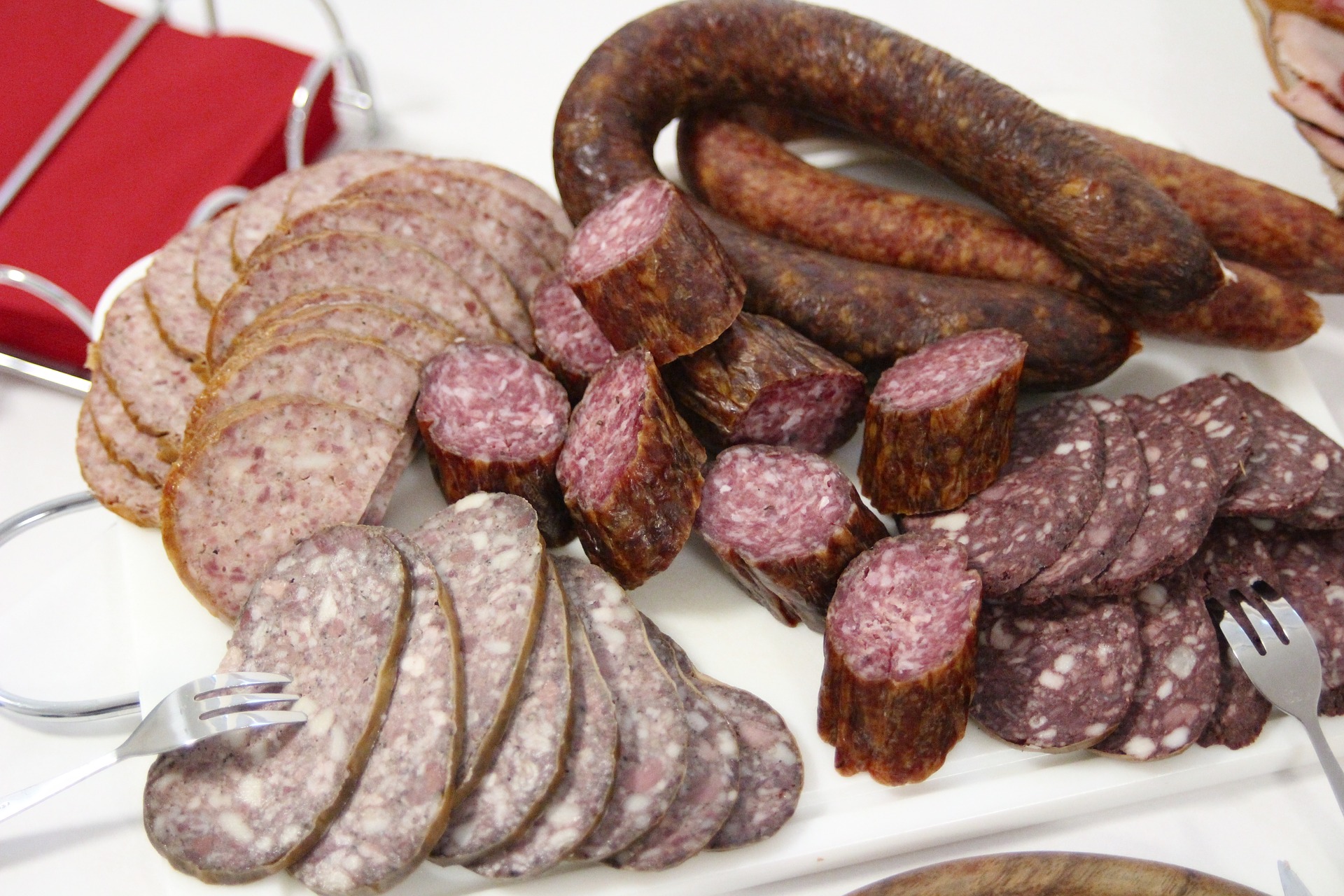 I was having nightmares; I was so conflicted all of those comments from the meat eating morons I mentioned above were echoing through my mind.

Maybe we were meant to be carnivores! How could I have missed such simple homespun wisdom even though human beings are officially classed as omnivores and despite 99.999999999% of the meat eating population having never killed an animal for their own food. Of course they were right.

Maybe I was just a protein starved insane person, reeling through life in a carbohydrate-based fog, never seeing the light.

All praise the almighty ham, believe in the beef, supplicate yourself at the feet of the meat.

My mind was whirling with all the possibilities, an explosion of new tastes, a whole new way to pig-out on a Saturday night.

pocketsend:11@raj808, play around with the token of fun - POCKET!

Shared on twitter.. because I'm reet posh I am!

Some old timey steemian shilling their past posts like Walter White when he realizes he's fckn hard as nails.

So often 8 have been told that I am unable for not loving sticky ribs and I am like, jeez, feck off. The meat crusaders will never end crusading!!

Yeah, but in my mission to post daily the showcase Sunday has actually been a boon to my sanity. Lol, a day where slightly less writing needs doing. To be fair their was a long period of time where so many creative initiatives were happening on steem that I have a wealth of material for the old SCS.

Yup, they're as bad as militant vegans ;-)

Oh I have first hand experience of the militant vegans!

I have found it a lifesaver for that very reason, it's almost like a half day off!!

Thank you for the read, I enjoyed.

I have a brother who went through something similar, he became a vegetarian at a very young age, I cannot remember the reason why now, but he was not as strong as you.

What enticed him back onto meat again was, he became an engineer working on a Cruiseliner sailing around the Caribbean Islands, and every morning when the chefs were cooking bacon for the holidayers breakfasts, the smell coming from the kitchen and into the living quarters, made his mouth water so much, his willpower caved and into a craving, then into an uncontrollable desire to eat a bacon sandwich.

He has been eating meat ever since.

I am from the UK and live in the Philippines with my Filipino wife, and for New Year her family were cooking a "Lechon" (Pig) for the evening dinner, a Filipino tradition.

As we had taken a while to arrive at the family farm, where they live off the farm, I wanted an afternoon power-nap in the back bedroom to recharge myself for the evening celebration, where I had only just laid my head on the pillow, and I could hear this screaming coming from outside the window.

When looking outside to see what the screaming was, a pig was being carried to near the home to be slaughtered.

That noise of screaming ruined my power-nap and I had to go to the front of the house away from the noise, as I knew that if I had not, I would not be able to eat the Lechon in the evening if I stayed in the room any longer.

Isn't it funny how I could not listen or watch, had to take myself away from it all, though when the pig arrived on the table that evening, I did not hesitate to enjoy it with the family! Though I had enjoyed a few beers by then.

I hope that you do not mind me sharing this story, and I may share with photos on my blog, and if okay with you, I will share your blog on mine, as you are right, these are funny real-life situations that we find ourselves in.

Awesome comment m8, and I enjoyed reading your story!

Yeah, I think it's a big disconnect for most people of where their food comes from. Lol, the whole of this post was written in a sarcastic kinda parody style. I'm a vegetarian from an early age who ended up eating fish when I was around 20, but the main reason why I felt OK with it was that I'd caught and killed my own fish. It felt like I had an understanding and respect for the taking of that life!

ha ha, fast forward nearly 20 years and I've spearfished in many places all over the world.

I get where you're coming from with the pig though... I've seen programs on TV where they slaughter pigs in a village environment and the screaming is the thing that is so hard to stomach... pigs sound a lot like humans when they scream at the end of their lives. I think I would have been the same as yourself m8... hiding inside the house ;-)

This is hilarious! hahaha. Nice work thanks for the laughs.

Nice work thanks for the laughs.