Did you know # 19: The planet with hot ice cubes 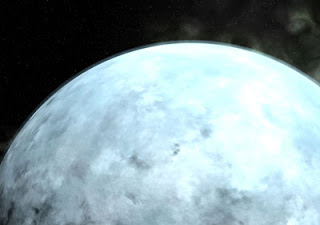 Gliese 436b orbits around a red dwarf , 33 light years from us, in the constellation Leo . The planet is huge, being somewhat larger than Neptune, with a diameter of more than 50,000 km . It is also very close to its sun, only 4 million kilometers , 15 times closer to its solar star than Mercury is ours. This distance partly explains the very high temperature on the surface, of the order of 440 ° C.

Yet this planet probably resembles, visually, Star Wars' Hoth planet, covered with ice with perhaps a thin, powdery layer, like an infinite mantle of snow covering the earth, in an atmosphere saturated with carbon, hydrogen and helium . And the ice is indeed water ice ... Now, everyone knows that ice water can not maintain its condition at nearly 4 times its boiling point . So, what the hell?
Gliese 436b seems to defy the peculiarities of the material. It is actually a huge gaseous planet, like Jupiter, except that its main gas, water vapor, is trapped by gravity and compressed to the point that it forms ice-10 (Ice-ten), a particular state of water in which molecules reorganize into cubes giving the appearance of an ultra-compact crystal: it is indeed one of the " natural " states of water for which the density is maximum, corresponding to conventional water compressed almost 3 times!

This state is possible because of the pressure exerted on the water by the gravity as well as, paradoxically, by the high temperatures, ice-10 being able to be formed only at a high temperature (see Ice-X ). There are actually several solid states of water. We are used to only one, but we know this phenomenon for other subjects: they can compress and transform in the same way that carbon, under very high pressure, turns into a diamond!

That's probably what would happen to Neptune if we brought it closer to our sun. Its atmosphere would disintegrate and the water would be compressed, the scenario that is thought to be at the origin of this spatial strangeness that is Gliese 436b.

Morality, we have a planet made of ice that could burn you in no time, a hell of ice on which any snowman would be 8 times hotter than was the maximum temperature recorded on Earth ! Not enough to agree a little refreshment.